Amazon Fire TV Recast review: One of the best cord-cutter companions yet

The Amazon Fire TV Recast is a user-friendly OTA streaming product especially suited to users and fans of the Fire TV.

If you're an experienced cable TV cord-cutter you might be familiar with names like Tablo, SiliconDust and Channel Master. They all make DVRs that record the free, over-the air (OTA) TV you can get in most areas of the country by putting up an antenna. Outside the world of cutting-edge cord cutting, however, they're hardly household names.

The Amazon Fire TV Recast antenna DVR doesn't charge any monthly fees. Its sophisticated program guide fits live TV channels seamlessly into the Fire TV interface. Setup is easy and out of home streaming to your phone works well. Picture quality was perfectly good and performance was more reliable than streaming live TV services. You don't need a Prime membership to use it, though that helps.

It's more expensive initially than many antenna TV options. You need a Fire TV device attached to your TV, and can only watch on two devices at once. Alexa search isn't as dependable as manually using the channel guide, and the required Fire TV menu system pushes you toward Amazon content.

The Amazon Fire TV Recast DVR makes it easier than ever to watch free live and recorded over-the-air TV without monthly fees.

You know what is a household name? Amazon. The massive retailer's first streaming DVR, the Fire TV Recast, gives the niche (but growing) OTA TV audience a great, new option, and could help propel cord cutting even further into the mainstream.

The Recast isn't cheap at $230 to start, but Amazon's advantage is that you don't need to pay anything to get guide data -- unlike Tablo and DVR stalwart TiVo, for example. Sure, Amazon wants you to spend money on its digital content and Prime membership, but as long as you have a basic (free) Amazon account, a home network with broadband Internet connection, an antenna and a Fire TV Stick (starting at $35), you don't need to pay anything beyond the starting price to use Recast. That's a refreshing change in a world increasingly geared toward milking you of another few bucks every month.

The Recast stands above most of the other options at the price. The Channel Master DVR+ is discontinued and its Stream+ replacement still needs work, the TiVo Bolt OTA is finnicky and costs $500 all in -- and neither work with more than one TV simultaneously. The cheaper AirTV comes closest to competing with the Recast, but it doesn't include an integrated DVR (it's DIY USB hard drive). And of course live TV streaming services like YouTube TV, DirecTV Now and the rest have their advantages, but start at $35 per month if you want local channels.

If you want an enjoyable, versatile TV-viewing experience on your TVs at home and mobile devices, but don't want to pay every month for the privilege, the Amazon Fire TV Recast is currently the cord-cutting product I'd recommend.

Did you know that the modern "black box" flight data recorder used on passenger jets isn't black -- or a box? Instead it's shaped like a piston, and it's orange. However, if I were to imagine what it should look like, it would resemble the Amazon Fire TV Recast. This thing is black, it is a box, and it's a recorder.

This Recast is designed to live out of sight somewhere near the OTA antenna it's attached to, so the design doesn't matter as much. It's so indistinct that I only realized I'd placed it upside down when writing this very paragraph -- the top is black plastic with "Amazon" on it, while the bottom is a grippy rubber. If dimensions are important for whatever reason, it's 7.1-inches square by 2.9-inches high -- or the same size as a Mac Mini. There is one operation LED on the front that glows red when it's recording, white when the device is on, or blue if there's a connectivity problem.

Most people will connect to the Recast via Wi-Fi, as the best TV reception in your house probably isn't anywhere near your router. For others, there is an Ethernet port on the back. Also on the rear is a USB port, but it can't be used for expanded storage yet (though the functionality is coming); however it can be used to power a tuner amplifier. You'll also find the coaxial antenna connector on the rear. Simply connect an external antenna (see our favourite HD TV antenna here) and fire up the Fire TV app.

Unfortunately, the Recast's contributions to Fire TV's menu aren't front and center. The "Live TV" tile will appear in your Recent bar at the top -- with a helpful Time Elapsed icon to show you how far the last-tuned channel is through its current program -- but most of the menu real estate is devoted to app icons and Amazon's streaming shows. You'll have to scroll five rungs down the menu ladder to find more live TV options, while the tiny "DVR" menu item in the main top menu serves as the primary gateway to the Recast's full functions.

The Fire TV Recast is available in two main versions -- two tuners with 500GB ($230) or four tuners with 1TB ($280) -- but the company also bundles the 500GB version with a $50 Fire TV Stick 4K and an indoor HDTV antenna for $250. While you can use the Recast with just a tablet or a phone, it's really designed to be used alongside a Fire TV. They're cheap -- you already spent $200 on this, just get one. It's worth noting that you can only watch live TV or recordings on two different devices at once.

The Fire TV mobile app offers your content front and center with "On Now" appearing as the first page. Recordings are next followed by the Remote for controlling your Fire Stick. Users may find they use the app more than the remote, especially if they're watching remotely.

I've been testing DVRs for many years, and the Recast doesn't behave like a first-gen product. It feels pretty fully formed right out of the gate, and it integrates seamlessly into the Fire Stick's interface.

There's numerous ways to access the Recast, and I'm sure you'll quickly find the way that suits you -- I tended to click on the Live TV tile in the Recent folder, and then access the guide using the menu/hamburger button. The hamburger button is contextual, so pressing it at other times not related to the Recast -- such as within the Apps section -- won't work.

Watch this: Amazon Fire TV Recast is one of the best DVRs for the money
01:47 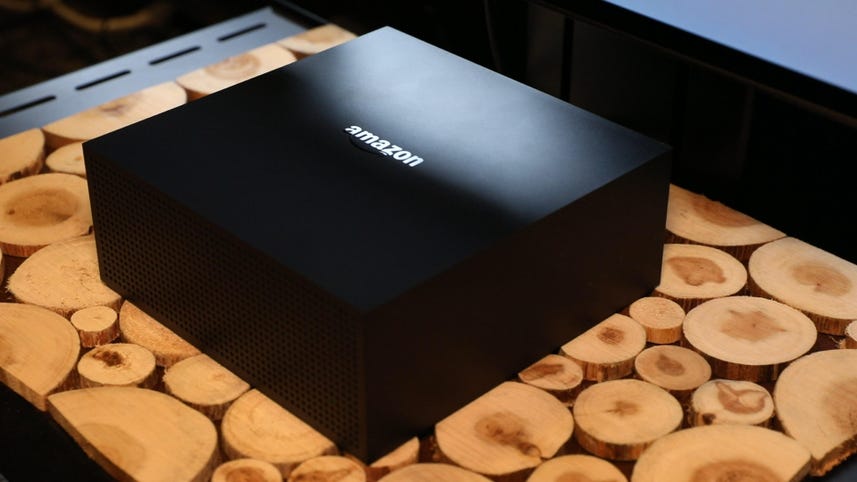 Amazon Fire TV Recast is one of the best DVRs for the money
1:47
Watch Now

The basic design of an on-screen guide hasn't changed much in the past 10 years. It's still essentially a huge grid with channels in one axis and time in the other. The Recast doesn't mess with the formula, but it's marginally more attractive than Tablo's interface, and it adds live video and preview thumbnails. Using the guide I was able to record one-offs or a series just by clicking on the program within the guide.

Though it varied depending on the individual channel, I found picture quality to be overall very good and definitely the equal of streaming OTA services such as DirecTV Now -- with much less lag between channel changes, too.

It's possible to pause live TV and the buffer lasted at least 15 minutes, but you may need to check your screen-saver options. If the Fire TV's screensaver kicks in, you lose both the channel and the buffer.

Given that you can't have a Recast without a Fire TV, their "problems" are mostly one and the same. Amazon will gleefully sell you its digital content or push you to watch Prime shows at every opportunity. For example, search results don't let you set up a "record when occurs" for a particular show if it's not available, but you can buy it or add the program to your Prime Video Watchlist.

I tested the device mostly with the remote, but I also used the onboard Alexa microphone and found the navigating with the buttons to be more reliable. For example, "Alexa, channel up/down" doesn't work -- you need to specify the channel name -- and sometimes Alexa didn't find shows I wanted to to record when the 14-day guide indeed told me they were there.

Unlike Tablo, there's no way to know which resolution a station is in unless you visit each one, and then only by eye. If you are rocking a big 4K TV a 480i station is going to look pretty obviously bad, and I'd appreciate knowing the channel's quality.

I did have some other random lockups and stutters of live TV -- nothing consistent however -- and I found it to be a lot more stable than the OTA streaming services I've used. I wasn't able to test the device with the Fire TV Cube or an Amazon Echo device in time for this review, but for what it's worth, Amazon specifically suggests using the Echo Show with the Recast as well.

Lastly, I tested the ability to stream to multiple devices and found that I could stream to a Fire TV and my phone, and while it worked most of the time, I did notice once that the phone got a little choppy. Taking the phone outside worked well, thanks to the current version of the Fire TV app, and live TV is available from the main page. In comparison, Tablo's "Connect" feature isn't turned on by default, and I needed to go into my router's settings to enable port forwarding -- definitely not something recommended for beginners.

How tied are you to the Amazon ecosystem, and how much do you want to cut your cable? If the answer to both of these questions is "very much," then the Recast is for you. It's easy to set up, it's relatively easy to navigate, and it doesn't cost you anything extra once its installed. It's also a worthwhile consideration to cord cutters who aren't a part of the Amazon universe -- people who don't own an Echo or a Kindle -- but who just want a solid, fee-free antenna DVR.

Though the future is in streaming OTA services and on-demand, the Recast is a slick "hardware streaming DVR" for people who don't want to pay monthly fees to watch their content.

Design 9Ecosystem 8Features 9Performance 8Value 7
Get the best price on everything
Shop your favorite products and we’ll find the best deal with a single click. Designed to make shopping easier.
Add CNET Shopping