GoPro Hero5 Black review: Forget the rest, this is the GoPro to get

All the goodness of the Hero4 Black and Silver mixed in with a whole new bag of tricks.

With the Hero5 Black, GoPro is selling more than a camera. It's a solution for shooting, editing and sharing video nearly anywhere. Whether that's done at the beach, on a mountain or in your backyard is up to you.

The GoPro Hero5 Black is a true flagship camera with all the shooting options from its predecessor plus raw and wide dynamic range photo capture and linear field of view video, a touchscreen, a waterproof body, GPS, electronic image stabilization, stereo audio, voice control, the option for auto cloud uploads, and the best photo and video quality in a GoPro.

Battery life, especially with GPS, Wi-Fi and EIS on, is predictably short and the camera is not compatible with older batteries. Auto upload feature only works with GoPro's $5/month Plus service. Linear field of view and electronic image stabilization not available at all resolutions and frame rates.

Combining everything great about the Hero4 cameras and then some, the GoPro Hero5 Black is a no-compromise capture device for the ordinary and extraordinary.

It's been more than two years since GoPro launched the Hero4 cameras and in that time, unsurprisingly, competitors caught up or surpassed them on features as well as price. Even the company's top-of-the-line Hero4 Black was missing an important feature -- a touchscreen -- that made it less attractive than the less expensive step-down Hero4 Silver.

The Hero5 Black corrects this, giving you everything you'd find in the Hero4 Black, including the best possible video and photo quality, plus a touchscreen and a whole host of new features for $399 in the US, £350 in the UK or AU$549 in Australia.

The new camera also does away with one of the things I liked least about them: the polycarbonate housing. The Hero5 is dustproof and waterproof to 10 meters (33 feet). You don't have to think twice about a little snow, mud, sand, rain or surf. There's no more muffled audio from being sealed up and the lens cover is easily replaced if it gets dinged. For those times when you do need more protection, there's a housing case good to depths of 60 meters (196 feet).

GoPro also ditched the three-button setup on prior models. Press the record button on top to power up and start recording, then press it again to stop recording and turn it off. There's also a small shooting mode button on the side that acts as a power button as well.

Don't have your hands free to work the camera? The Hero5 can be controlled with your voice. It works really well in general and I found myself using it when I didn't even have to.

There are no voice commands for turning on and off wireless or the built-in GPS, which could save battery life if included. Also, in noisy environments like biking around New York, it worked sporadically. The GoPro Remo waterproof voice-activated remote fixes this, making it possible to ride through the city with the camera mounted on my helmet and control the camera hands-free.

All of the shooting options from the Hero4 Black are carried over, including video capture at up to 4K resolution at 30 frames per second as well as 1080p at 120fps. New options include 12-megapixel photos in raw format for more editing control, and there's also a wide dynamic range mode. GoPro also added a linear-view setting that corrects distortion in its wide-angle photos and videos as well as electronic image stabilization (EIS). Neither the EIS or linear field of view are available in 4K and can't be used with frame rates higher than 60fps.

Wind noise gets addressed with the Hero5, too. GoPro used three mics on the Black and the camera will automatically switch between them to deliver the best possible stereo audio. You even have control over whether you care more about wind reduction or stereo audio.

Earlier in the year, GoPro CEO Nick Woodman said the Hero5 would be "the most connected and convenient" camera GoPro has ever made and any new hardware would do a better job of connecting to phones as well as the cloud.

Enter GoPro Plus, a $5-per-month cloud service that makes it possible to upload, edit and share your clips with a phone or computer. Plug in a Hero5 to charge and the camera will automatically upload your photos and videos to the service. However, video gets transcoded into 1080p at 30fps, regardless of the recorded resolution. Basically, the service isn't for backing up so much as it is to have all your clips readily available for watching and sharing anytime and anywhere.

The service also gives you access to a library of licensed music to drop into your clips, 20 percent off on mounts as well as accessories from GoPro's site, premium support and access to exclusive GoPro apparel. That last one probably isn't going to seal the deal, but the discounts and music are nice bonuses.

Watch this: GoPro's Hero5 likes water, swearing and flying on the Karma drone
04:18 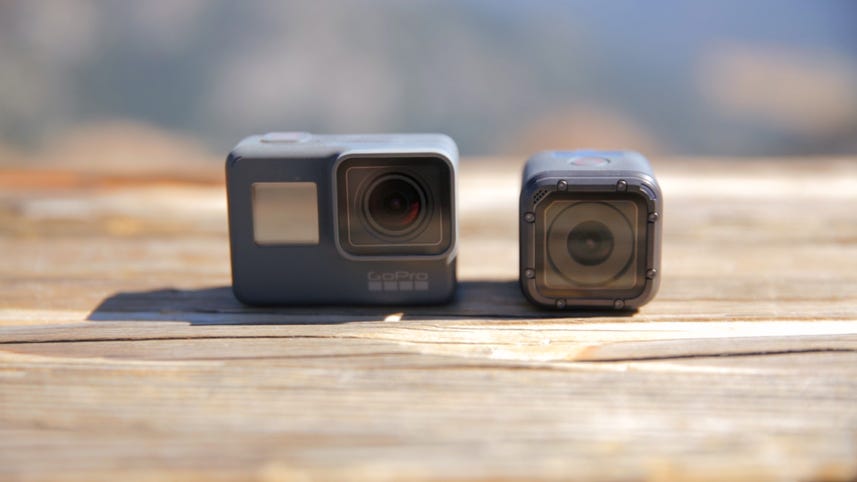 The cloud service ties into a bigger issue that has potentially stalled sales of new GoPro cameras: No one wants to edit their videos. To that end, in February, GoPro picked up two mobile video-editing apps -- Replay and Splice -- with the former relaunched in May as Quik.

Quik, which is available for iOS and Android, analyzes your video clips to find the most exciting stuff to include and cut out the boring bits. You can trim it further if you don't like what you got. It'll then add transitions and effects, then sync those to the beat of the music you pick. These same features are available in a desktop version of Quik, too, if you want to do your work on a bigger screen.

Quik for desktop also gives the camera's GPS purpose. If you have it on while recording, the data captured can be turned into video overlays. There's an Info Cluster that gives you date and time, distance in kilometers or miles, altitude and elevation gain; a speedometer and speed graph (the latter comes in handy for tagging high-speed highlights); GPS path as well as g-force. All of them can be resized and placed anywhere on your clip.

Despite all the improvements there is still one thing that didn't get better: battery life. Recording in 4K at 30fps, you'll get about an hour and a half of recording time. The same goes for capturing in 2.7K at 30fps with EIS, Wi-Fi and GPS on. Basically, if you're going out for more than a couple clips, you'll want to bring along at least one extra battery. And since it's a new design, you can't use your old GoPro batteries.

Worth the upgrade for the features alone

If you're still rocking a Hero3/Hero3+ Black, upgrading to the Hero5 Black is totally worth it. Jumping to a Hero5 from a Hero4 Silver or Black is a little less necessary for image quality alone since it isn't drastically better. That said, if you want all the shooting options including raw and wide dynamic range photo capture, a touchscreen, a removable battery, a waterproof body, GPS, electronic image stabilization, stereo audio, voice control, the option for auto cloud uploads and the best photo along with video quality in a GoPro, this is the camera to buy.