The foldable, travel-friendly Mavic is as unobtrusive as a toy drone, but with the performance, features and image quality of a larger prosumer quad.

There have been several kinder, gentler camera drones this year -- from the large PowerVision PowerEgg to the compact Yuneec Breeze -- but the DJI Mavic Pro is the only one to combine high performance, lots of automated flight modes and obstacle avoidance in an ultracompact body. Add in DJI's assortment of safety and ease-of-use features and you've got a drone that anyone can take anywhere.

The DJI Mavic Pro's compact foldable design makes it more travel friendly than any other camera drone with similar capabilities. Its gaming-style controller is equally compact, but still has all the controls you need to fly and control the camera and it can be piloted with only an iOS or Android device. Battery life is very good for a small quadcopter.

The phone mount is a little awkward to use. Not user repairable. Camera lens is a little narrow for landscapes.

If you've been looking for a discreet, but powerful travel-friendly camera drone, look no further than the DJI Mavic Pro.

One of the few complaints I've had about the company's Phantom models is that they aren't particularly travel friendly, mainly due to the camera and gimbal position and the fixed landing gear. The Mavic doesn't have these issues and its propeller arms and the props themselves fold up so there's no need to remove them.

The smaller size -- of both the drone and its controller -- and decidedly un-Phantom looks make it more approachable and less obtrusive. The thing is, you still get nearly the same performance as you would from the company's top-of-the-line Phantom 4. It'll cost you about the same, too: $1,000 in the US, AU$1,700 in Australia and £1,100 in the UK.

DJI Mavic Pro is a flying camera to take anywhere

The Phantom 4 has a higher maximum speed and can withstand stronger winds, and its camera has a wider field of view. The Mavic Pro is basically better in every other way, though. For example, its new OcuSync encrypted transmission system, gives you control up to 4.3 miles (7 km) away and streams video at 1080p. The Phantom 4 has a max range of 3.1 miles (5 km) and streams at 720p.

Also, while it might not have the power to cut through really strong winds (DJI says it can handle winds up to 19-24 mph or 29-38 kph), it was able to keep the camera stable and fly steady in 10-15 mph winds and still get between 22-25 minutes of flight time before it landed itself. It does warn you when the winds are too strong for its motors, too.

Like the drone itself, the controller is very small, but still has a monochrome screen for important flight data and physical camera controls. Want to see what you're shooting? You can connect a phone and mount it just below the control sticks. Getting your phone in the mount is a bit of a pain and requires you to remove any case you might have on it, but it does mean your phone isn't blocking your view of the controls.

DJI added a switch to change from RC to a Wi-Fi mode, so you can quickly launch and control the Mavic with only your phone at distances up to 80 meters (262 feet) with a top speed of 4 meters per second (13 feet per second). It's nice to have for things like quick selfies, but using the actual controller is better.

For the camera, DJI stripped away what it could of the body and the lens is smaller -- a field of view of 78.8 degrees compared with the Phantom 4's 94 degrees -- but it has the same 1/2.3-inch size sensor. That might not sound like a big difference, but if you're used to the wide-angle of the Phantom, the Mavic's narrower lens is noticeable especially if you're flying over something and shooting straight down. 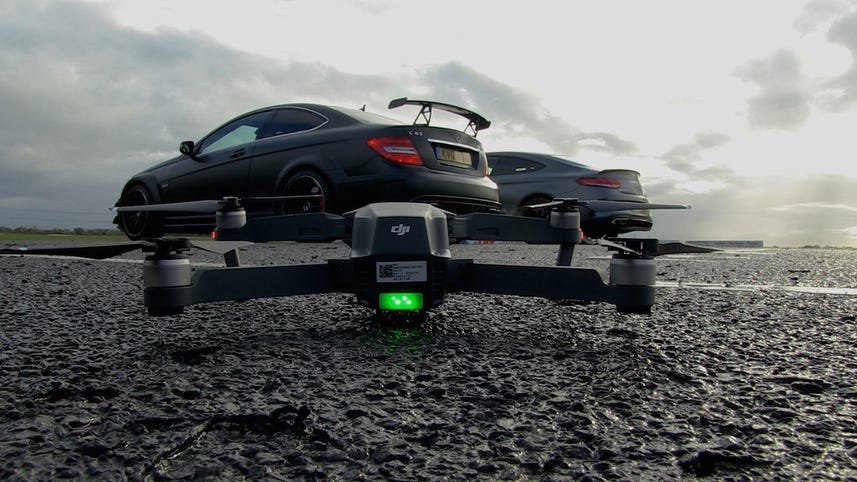 Can DJI's Mavic drone fly with the pros?
2:56
Watch Now

The camera can record 4K-resolution video at 30 frames per second or 1080p at up to 96fps and 12-megapixel photos in JPEG or Adobe raw. (You can see all of its capabilities on the Mavic's spec page or by downloading the PDF manual.) Instead of having fixed focus like the camera on earlier Phantoms, the Mavic Pro's camera requires you to tap to autofocus on a subject or it can be manually focused. The camera can also be rotated 90 degrees for portraits.

ActiveTrack, DJI's name for its subject-tracking mode, can be used for people, animals and vehicles and will now allow the drone to follow from behind, in front or along side a subject as well as circle one. Selfie fans will appreciate the new Gesture mode, which lets you use hand motions to get the camera to focus on you and snap a photo. The tracking isn't foolproof, but it's the best you're going to find on a consumer drone of any size at the moment.

DJI managed to not only retain the Phantom 4's obstacle avoidance and intelligent flight capabilities, but updated them for the Mavic Pro. It can sense objects in front of it up to 49 feet (15 m) away while traveling at up to 22 mph (36 kph), while optical sensors on its belly help it fly indoors and keep it from hitting the ground even on a slope. In fact, a new Terrain Follow mode keeps it at the same height even if you head up a steep slope.

The drone has a top regular speed of 24 mph (38.5 kph), but has a Sport mode which will let you take it up to 40 mph (64.8 kph). There's a Tripod mode, too, that takes your top speed down to 2.2 mph (3.6 kph) so it's easier to get the drone into the right position for photos and video or simply make it easier to navigate in tight areas and indoors.

If all of that's not enough, the Mavic Pro has a new Precision Landing system that uses the video and GPS information captured at takeoff to guide it back to land within an inch of where you launched from. I'm not sure if it was actually within an inch when I used it, but it was close enough and truly remarkable to see it guide itself in and land on nearly the same spot it took off from.

When it comes to consumer drones, in my experience, smaller is better. Take a big hexacopter like the Yuneec Typhoon H out to a public park and you'll get more looks and questions than you do with a Parrot Bebop. The Mavic Pro is the perfect answer: a quad that's as portable and easy to fly as a Bebop, but with the performance, range and image quality of a larger model. And with everything in constant communication with each other -- from the motors to the battery to the camera -- it's easy to see why the Mavic performs as well as it does.