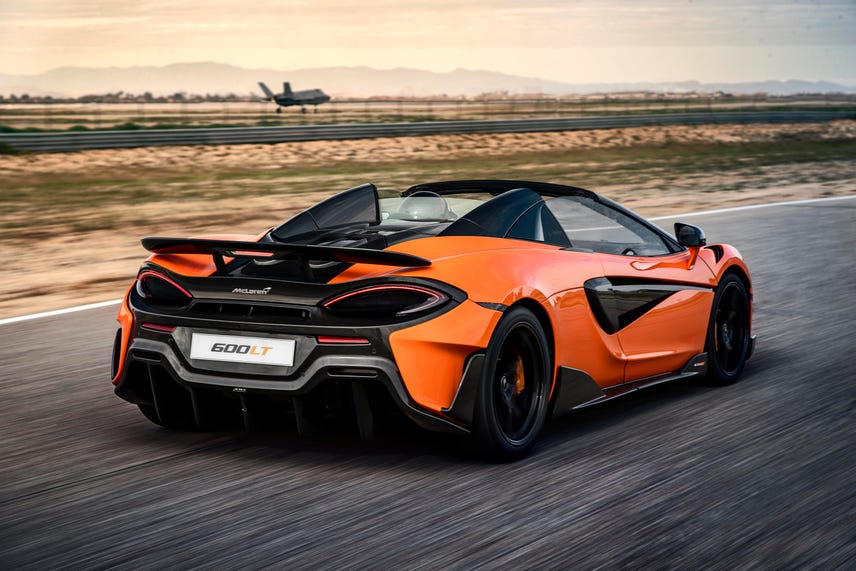 Bradley Ellis is a professional race car driver and 2007 British GT series champion. The 31-year-old Brit is riding shotgun as I pilot the 2020 McLaren 600LT Spider around Arizona Motorsports Park, just west of Phoenix. He's never met me but seems totally unfazed as I get to know the 2.2-mile road course in a 592-horsepower McLaren supercar. In fact, the first thing he tells me is to pick up the pace.

The 600LT Spider is McLaren's fifth Long Tail model, and one that Ellis knows quite well. The Spider gets the same increase in power, reduction in weight and upgraded aero as the 600LT Coupe, itself a fine-tuned tool for wreaking havoc on race tracks. Ellis urges me to carry more speed as I head into corners, and "commit" to throwing the two-seater around, trusting that this thing will stick no matter where I tell it to go. The McLaren 600LT Spider is a car that's easy to learn, and one that's seriously rewarding lap after lap.

I'm no racetrack newbie, yet it's still unsettling to blow past the course's last brake marker before stomping on the 600LT's diamond-hard stop pedal. The ceramic discs bite hard and kill speed with immediacy. Flicking the Alcantara-wrapped wheel in either direction tucks the front end in, the Pirelli P-Zero Trofeo R tires offering tremendous cornering grip. The suspension's adaptive dampers keep matters nearly flat in Track mode, but doesn't kill me as I clip a curbed apex.

The 600LT is phenomenal, and easy to drive fast. But that doesn't mean there isn't some drama baked into the experience. Dialing the McLaren's stability control to its Dynamic setting loosens the leash, letting the rear end step out in a controlled slide worthy of silly grins and style points.

The whole package is remarkably neutral, enabling drivers to walk the fine line between grip and slip while bombing around the track. Communicative, weighty steering lets you feel when the front tires are reaching their limits, and there's tons of feedback delivered through the carbon-fiber chassis tub, right up to the seat of your pants.

Removing a car's roof normally requires some additional bracing to keep body flex in check, but not so with the 600LT. Sure, the three-piece retractable hardtop does come with a 110-pound weight penalty, but you'd be hard-pressed to feel this extra heft on the track. To that point, McLaren says the 600LT Spider can accelerate to 60 miles per hour just as quickly as its Coupe counterpart: a staggering 2.8 seconds. Running the quarter mile takes just 10.5 seconds, and the car's top speed is 201 mph (with the top up, anyway -- go full v-max with the roof open and you're limited to just 196).

The 600LT's 3.8-liter twin-turbocharged V8 produces 457 pound-feet of torque to complement the aforementioned 592 horsepower. Throttle response is snappy, and power arrives in a linear fashion. My only complaint is the whiny soundtrack at lower revs before the engine really starts to sing as you wind it up. And either least or most importantly, depending on how much you like fun, yes, the 600LT Spider will shoot flames out of its top-exit exhausts, just like the Coupe.

Bolting up to the engine is seven-speed dual-clutch transmission supplied by Italian firm Graziano. Each pull of the large, carbon-fiber paddle shifters is accompanied by a slight jerk and loud crack from the exhaust on upshifts, while downshifts are ripped off in a rapid manner. Without question, it's a very good gearbox -- just not quite as good as ones found in Ferraris.

With the drivetrain toggled to Normal, power is still plentiful, but the Spider will easily cruise at 80 mph without breaking a sweat -- unlike some supercars, it never feels like it's constantly trying to get away from you. In its full-auto setting, the dual-clutch transmission performs fairly fluidly, swapping cogs seamlessly in traffic.

Not that it really matters, but the 600LT Spider will return an EPA-estimated 15 miles per gallon in the city and 22 mpg on the highway. Not a terrible showing, all things considered.

Top up or down, the 600LT Spider is a head-turner, with a silhouette that closely mimics that of the Coupe. The Myan Orange paint on my test car contrasts nicely with the generous amounts of exterior carbon fiber on the wide front splitter, side sills, fixed rear wing and diffuser. The addition of this weight-saving aerodynamic material contributes to 220 pounds of downforce at 155 mph, which is super handy on the track.

The electronic roof takes just 15 seconds to open, and can be operated at speeds up to 25 mph. My specific tester exhibits a few creaks, but hopefully those won't carry through to final-spec cars. But even with the top up, wind noise is still prevalent, with lots of tire chatter from the sticky Pirellis at all four corners.

Over the course of a 2.5-hour road drive, the 600LT Spider's interior is just fine. The seating position in the carbon-fiber buckets is perfect for sporty driving, and I love the Alcantara that lines the dashboard and door panels. My tester's fixed seating position, firm ride quality and loud interior environment will likely get old if you constantly find yourself road-tripping in a 600LT, but for short stints, you won't mind. Just remember to pack light: the frunk only has 5.3 cubic feet of cargo space.

If you want the latest and greatest tech in your supercar, the 600LT Spider probably isn't for you. The 7-inch Iris infotainment system comes with a USB input, and that's about it. Navigation is a no-cost option, but it's housed in a system that's clunky and confusing to use. Want to use Apple CarPlay or Android Auto? Too bad.

On the other hand, if you're the type who subscribes to the less-is-more mantra, the 600LT is for you. Buyers can delete air conditioning and radio, and add more carbon fiber than you can shake a stick at. With the lighter suspension components, brake hardware, windshield and wiring harnesses, you can have a 600LT Spider that's a full 219 pounds lighter than the 570S Spider on which it's based.

McLaren won't divulge the exact number of 600LT Spiders that will be built, instead saying the Long Tail models combined won't account for any more than 20 percent of the total 570- and 600-series lifetime production. In other words, seeing one of these won't exactly be a frequent occurrence.

The 600LT Spider is available to order now, and the first deliveries are expected to take place in April. The convertible starts at $256,500, excluding $2,500 for destination, which represents a $16,500 premium over the 600LT Coupe. That's no small chunk of change, but for the well-heeled customer who wants to let a bit more light shine in, it's a small price to pay for a convertible that's just as capable and lovely as its fixed-roof kin.