My first experience with the new 2020 Chevrolet Silverado HD is something I'm going to remember for a long time. Pulling a trailer with a two-story-tall anvil weighing a combined 35,500 pounds will be hard to forget. Even though the foam anvil only accounts for about 1,200 pounds of my load (steel plates make up most of the heft), it's still quite a sight.

It may look like I'm trailering Wile E. Coyote's latest Acme order, but that still doesn't take away from how oddly at ease I am behind the wheel of this Looney Tunes setup.

At take-off, my Duramax diesel-powered 3500HD dually shudders ever so slightly before rolling away down a closed-off airport runway outside Bend, Oregon. The truck builds speed in a reasonably swift manner, while braking and maneuvering around an open pad is anticlimactic. Besides swinging out more widely for tighter turns and longer launch times, it's a surprisingly normal drive experience.

That 35,500-pound load pegs the maximum towing capacity of the new Silverado HD. That works out to a massive 52% increase over the outgoing model. That also makes this rig a smidge more capable than the 2019 Ram Heavy Duty (35,100 pounds), besting the soon-to-be-replaced 2019 Ford Super Duty (35,000 pounds) in the process.

Credit for this General Motors truck's newfound capability goes to a beefed-up ladder frame, axles, driveshaft, U-joints and ring gears. Of course, what's under the hood counts, too, with an updated Duramax 6.6-liter turbodiesel V8 punching out 445 horsepower and 910 pound-feet of torque. The burlier powerplant enjoys better cooling thanks to a functional hood vent, enlarged 28-inch fan, and an after-run feature that re-fires the engine if it hasn't sufficiently cooled after heavy hauling. The engine works in concert with a new 10-speed Allison automatic transmission.

Buyers not interested in the diesel get a new base 6.6-liter, direct-injected V8 gasser with 401 horses and 464 pound-feet bolting up to a mandatory six-speed automatic. This setup betters last year's 6.0-liter V8 that was armed with 360 horsepower and 380 pound-feet. With the gas engine, the Silverado 2500HD top tow rating climbs a useful 18% to a total of 17,400 pounds.

Pulling in the real world

Away from the airport out on real-world roads, I get time wheeling Silverado 2500HD models in both gas and diesel flavors. For my money, the gas truck towing a trailer loaded with an excavator is far from a compelling experience. Acceleration is leisurely, and the engine really huffs to keep things rolling steady up gradual grades. In the end, the combination serviceably gets the job done. Really, the gas V8 is mostly for fleet customers with the powerplant accounting for 61% of sales in its segment.

For retail folks, Chevy says 70% will plunk down to upgrade to the Duramax diesel. After pulling an enclosed trailer weighing 14,000 pounds with the more potent engine, I can see why. It effortlessly motors away from a standstill as if it doesn't have anything hitched up to the back of it at all. An integrated trailer brake controller with memory and exhaust brake confidently slows the rig down on flat roads and down hills.

My tester's power-extending trailer tow mirrors prove handy to give a better view of the side, but the spiffiest new visibility feature is the Silverado's available Advanced Trailering System. It projects up to 15 different angles on the center touchscreen display from up to eight cameras, including an overhead view of the boxy nose, blind spots, bed, hitch and even the precious cargo inside the trailer. The slickest view is the so-called invisible trailer feature that stitches together multiple camera images offering drivers the ability to "see through" what they are towing. It's an excellent system that dramatically reduces stress levels when pulling big loads.

Helping to make towing easier still, the HD offers a Trailer App allowing the driver to verify lights and tire pressures. The app is also compatible with the ASA In-Command Control system, which lets drivers monitor water tank levels, control HVAC and power slide-outs when they have an RV in tow.

Of course, there will be plenty of instances where the Silverado HD won't have anything behind it or in its bed. Acceleration in an unloaded gas truck is brisk, with the automatic transmission smoothly going about its business. Diesel motivation turns the HD into a downright fast pickup, sprinting off the line and romping up to expressway speeds in alarming fashion. Tuning for the Allison gearbox is noteworthy, offering always well-timed and imperceptible cog exchanges.

Ride and handling from the class-exclusive short- and long-arm suspension ranges from surprisingly smooth to a touch bouncier depending on tires. A High Country shod with 20-inch Goodyear Wrangler rubber is comfortable going down the road, sharply turns in and is surefooted rounding corners for a full-size pickup. An LT trim perched on 18-inch Michelin LTX A/Ts is noticeably choppier and not as tied down through bends, but still compliant enough. In both cases, there's still some truck-like jiggle over more sizable bumps.

By itself, there's no denying the upsized road presence of the new HD over the Silverado 1500. Everything is bigger and wears specific body panels, minus the roof panel that's still shared with its smaller sibling. The big "Chevrolet" grille is a little polarizing in pictures, but I swear it isn't as gaudy in person. If you don't like it, you can pony up for the premium High Country trim wearing a more traditional Bowtie grille. Out back, things also grow, with a standard box that's now 6.7 inches wider and 3 inches longer, while the 8-foot box is 0.5-inches longer.

Inside, the volume crew cab model stretches 3 inches in length thanks to a 5.2-inch longer wheelbase. Sadly, as it is with the 1500, cabin surroundings are disappointing in terms of design and build quality to already look dated, especially compared to the impressive confines in Ram products. Even still, this is still a passable and roomy interior boasting respectable Chevrolet Infotainment 3 infotainment tech using a responsive 8-inch touchscreen standard with Bluetooth, Wi-Fi hotspot, Apple CarPlay, Android Auto and available with onboard navigation.

Optional safety technology includes blind-spot monitoring with lane-change alert, front and rear parking sensors, rear cross-traffic alert and head-up display. Oddly, adaptive cruise control and lane-keep assist are still missing from the list of offerings, while both can be had on Ford and Ram's HD trucks. The official word out of Chevy is that adaptive cruise is coming, but is likely to rollout on the Silverado 1500 first.

With crew cabs making up 74% of heavy-duty pickup trucks sales, Chevy is understandably rolling out the 2020 Silverado HD line with this configuration first. The first examples are hitting dealers as you read this. Regular cab, double cab and dually deliveries will begin in fall. Pricing for the 2500HD starts at a reasonable $35,695 (including $1,595 for destination) with the range's offering climbing all the way to $62,695 if you spring for a lux'd-up 2500HD High Country.

If you tow a lot and have the means, the diesel is definitely an option box you'll want to check if you plan on buying one of these new heavy-duty Chevy trucks. In fact, whether your hauling chores are routinely Looney Tunes or not, I'd strongly recommend splurging on the Duramax. 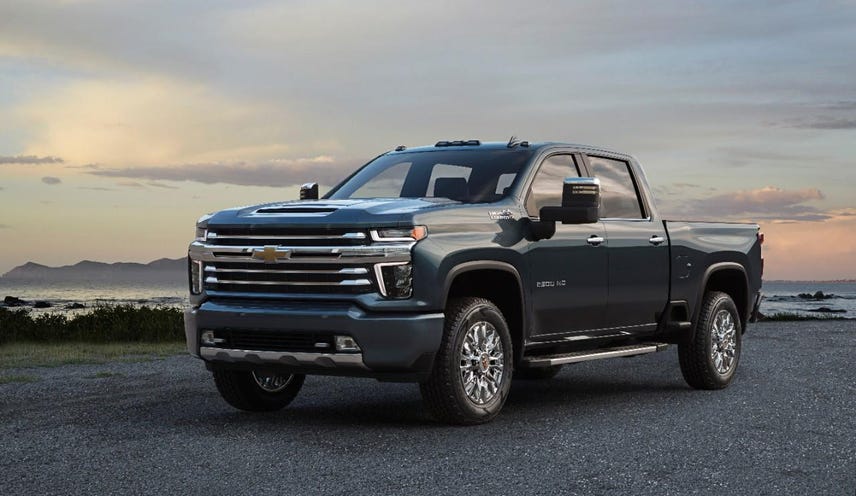 Editors' note: Travel costs related to this feature were covered by the manufacturer. This is common in the auto industry, as it's far more economical to ship journalists to cars than to ship cars to journalists. While Roadshow accepts multi-day vehicle loans from manufacturers in order to provide scored editorial reviews, all scored vehicle reviews are completed on our turf and on our terms.