It feels a little on-the-nose to say this, but the 2020 Audi RS6 Avant is, in a word, spectacular. I know. I know. "Automotive journalist loves 591-horsepower station wagon" isn't exactly breaking news. Yet after a day of driving the new RS6 wagon through the Malibu canyons in Southern California, here I am, thoroughly impressed and absolutely thrilled that, after more than a decade of begging, Audi has finally decided to sell one of its RS-badged longroofs in the good ol' US of A.

But now, America, it's time to put your money where your mouth is. Audi fulfilled its end of the deal by building a solid business case and doing the homologation work that's required to sell the RS6 Avant in the United States. That means you actually have to buy one. And you should. You really, really should.

Watch this: The Audi RS6 is coming to the USA and it's ready for the all-American road trip
19:02 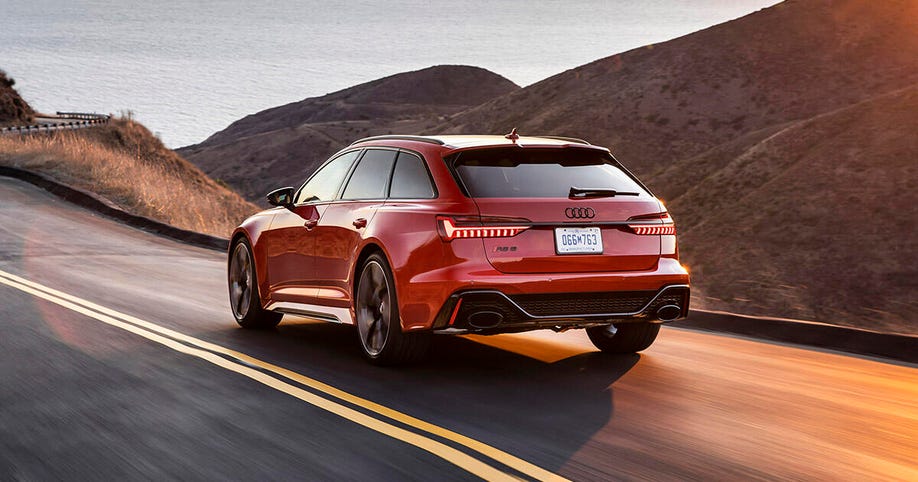 The Audi RS6 is coming to the USA and it's ready for the all-American road trip
19:02
Watch Now

No one thing about the RS6 Avant stands out as a piece de resistance. Rather, it's how this whole package comes together that makes it so appealing. It's the big V8. The sophisticated driveline. The sumptuous interior. The world-beating tech. Take all that and wrap it in sheet metal that isn't just pretty for a wagon, but downright arresting, full stop.

I can't think of a better way to say it, folks: This car fucks.

Under the hood, you'll find Audi's twin-turbocharged, 4.0-liter V8 engine, making 591 hp and 590 pound-feet of torque. Hit the checkered flag button on the steering wheel, hold the brakes and mash the throttle, and you'll activate launch control, allowing the RS6 Avant to rip off 3.6-second 0-to-60-mph runs. Should you have the space to keep going, the wagon will hit either 155 mph or 190 mph, depending on whether or not your car has the standard, 16.5-inch steel front brakes or the larger, 17.3-inch carbon-ceramic stoppers. (Both setups come with 14.5-inch rear rotors.) With great speed comes great responsibility, after all.

This V8 engine also uses 48-volt mild-hybrid technology, which allows for more liberal use of the stop-start system in normal driving conditions. European models even get a coasting function, powered by the same 48-volt system, but this hasn't yet been approved for use in the US. At least our car will be louder -- "significantly so," according to Audi. Still, I'll have to take the company's word for it for now, as the German-spec model tested here falls subject to Europe's stricter noise regulations which, quite frankly, take a lot of the fun out of having a V8-powered anything.

Nevertheless, the RS6 Avant is a delight to drive fast. The eight-speed automatic transmission shifts smoothly and seamlessly, whether left to its own devices or if you choose to use the steering wheel-mounted paddle shifters (which are too small for an Audi with an RS badge, even though they're now finished in aluminum).

The Quattro all-wheel-drive system shuffles power around as needed, though the standard sport differential ensures power is first and foremost sent rearward. Roll into the throttle as you come out of a corner and you can feel the car's rump hunker down, the torque thrust shoving you forward. The diff isn't so clever it'll fool you into thinking the RS6 is a rear-wheel-drive wagon, but it at least allows for a bit of playfulness from the big boy's hind quarters.

Then there's the standard four-wheel steering, which is great at masking the sheer size of the RS6 Avant on narrow, winding roads. Climbing one of my favorite Malibu canyons, the RS6 rotates around corners with a level of precision you wouldn't expect from something this size. Seriously, the slight action of the rear wheels makes the chassis feel about a foot shorter than it actually is, allowing you to take sharper turns faster, knowing the rear end can sufficiently claw into the pavement and spin you right 'round.

As with any good German performance car, there are a whole mess of drive modes to choose from: Efficiency, Comfort, Auto and Dynamic, as well as two reconfigurable RS1 and RS2 options, directly accessed by the "RS" button on the steering wheel. Also like any good German performance car, the differences between these settings are kind of insignificant. Even in its weakest Efficiency mode, the RS6 Avant will get up and go if you mash the throttle. Dialing up a sportier setting just gives the transmission a little more freedom to downshift, and adds more weight to the variable-ratio steering. Speaking of the steering, it's got quick turn-in and lots of feedback. The RS6 has one of Audi's better steering setups.

North America's RS6 Avant comes standard with adaptive air suspension, and to me, this feels like the best setup. The dampers can go from supple to sporty at the touch of a button, and they make the RS6 Avant a car you could drive all day, every day. Whether cruising down Pacific Coast Highway or giving the RS6 hell up in the canyons, the air suspension never misses a beat, keeping the body flat and filtering out unnecessary chatter from poorly surfaced roads. As a daily driver, I'd buy an RS6 this way.

If you're planning to regularly take your RS6 Avant to the track -- and I'm sure only a handful of you are -- then the Dynamic Ride Control chassis is worth considering. This steel-spring setup is a little bit lighter than the aforementioned air suspension, and includes pitch-and-roll control for improved stability. The DRC option is compliant enough for daily driving duties, it just turns the RS6 into a sharper corner-carver. That said, testing a DRC-equipped RS6 back to back with an air suspension model doesn't reveal any meaningful handling improvements on public roads. Both cars are beautifully set up, so really, it's all about how you'll use your RS6. For the five of you who'll track it, go DRC. For the rest of you, don't check that option box. The same can be said for the standard and carbon-ceramic brake packages, too.

The RS6's other options are largely cosmetic choices. Instead of the standard 21-inch wheels, you can fit the 22s seen here, part of the "Black Optic" or "Carbon Optic" exterior appearance packages. Several different exterior colors will be available, including a whole range of Audi Exclusive hues, including matte finishes.

Whether you go stealth or go wild, you can't go far wrong. The RS6 Avant looks killer -- properly aggressive with bulges in all the right places. Compared to a standard A6 Avant, the RS6 is just over 3 inches wider, and only the front doors, roof and tailgate are shared with its more subdued sibling. The front bumper is the same one you'll find on the RS7 Sportback, right down to the LED headlamps.

Inside, four different leather colors are available, with beautiful stitching on the highly supportive seats. Carbon fiber trim is tastefully applied throughout the interior, and rear-seat passengers are treated to the same three-across bench as the RS7 Sportback, albeit with more headroom thanks to the RS6's more upright silhouette. Of course, that functional shape is probably why you bought the Avant in the first place -- inherent cool factor aside -- and you'll be pleased to know there's a ton of room behind the rear seats. With the back seats upright, you'll have access to 20 cubic feet of space, which I have to imagine nearly doubles with the rear bench folded (Audi hasn't released this spec just yet).

Cabin tech duties are handled by the same MMI Touch Response infotainment system you'll find in any other new Audi, with a pair of screens on the center stack that manage traditional multimedia functions, climate controls and vehicle settings. Audi's excellent Virtual Cockpit tech takes up space in the gauge cluster, with reconfigurable displays and a whole host of information that make the other two screens irrelevant at times. From a functionality standpoint, MMI Touch Response is one of the best systems in the business. In addition, Apple CarPlay, Android Auto, a Wi-Fi hotspot and connected-car apps are all here, and standard.

Safety tech is also in high supply, with Audi's latest and greatest systems making their way over to the RS6 Avant. When the wagon goes on sale next summer, look for forward-collision warning with automatic emergency braking, adaptive cruise control, blind-spot monitoring, lane-centering assist and more. All the stuff you'd expect, really.

What I didn't expect, believe it or not, was that I'd instantly love the RS6 Avant as much as I do. Truth be told, I've had a hard time warming up to some of Audi's recent RS models. The RS5 Coupe and Sportback are capable cars and talk a big game on paper, but they're too buttoned up for their own good. Ditto the TT RS -- what could (and should) be a kind of mini-R8 turns out to be a fantastic engine in search of a better home. I was worried the RS6 Avant would also be a little too sedate, too mainstream. Instead, Audi's made a supercar in the shape of a wagon, a meet-your-heroes experience for everyone who's been dying for the RS6 Avant to someday be offered on American soil.

The only real hurdle between the RS6 Avant and the driveway of every salivating enthusiast across the country will be its price tag. The official MSRP won't be available for a few more months, but Audi tells me the RS6 Avant will be priced similarly to the RS7 Sportback... which is also an unknown number right now. I'm going to assume both cars will start below $120,000. I'm also going to need a raise.

More than anything, my hope is that enough folks will actually run into Audi dealers yelling "shut up and take my money!" that the automaker doesn't make this a one-time exercise, something it can point to as an example when Americans complain about why we don't get the next RS6 Avant. Audi has created a fantastic, fast wagon, and is finally giving us a shot at owning one. I'm asking you, new-car buyers with salaries far greater than mine, consider the RS6 Avant instead of some high-riding performance SUV.

Editors' note: Travel costs related to this story were covered by the manufacturer, which is common in the auto industry. The judgments and opinions of Roadshow's staff are our own and we do not accept paid editorial content.