Volkswagen's stylish new flagship is a mix of VW CC style and Audi A7 utility, but this familiar fastback has a flair of its own.

Meet Volkswagen's new flagship: the 2019 Arteon. And no, it's not an SUV. It's a sedan... sort of. The spiritual successor to VW's CC features a liftback design -- a la Audi's A5 Sportback. SUVs might occupy a large chunk of the market, but VW believes the Arteon is far more deserving of the flagship title than even its Atlas SUV.

Physically, the Arteon is 2 inches longer than the CC, which went out of production in 2017. However, the new model pushes its wheels closer to its extremes, lengthening the wheelbase by 5 inches, which frees up about 3 more inches of second-row legroom and gives the Arteon a more planted stance on the road. The liftback design opens up a larger aperture for loading cargo and, more importantly, at 22.7 cubic feet, boasts nearly double the cargo space of the old CC's trunk. With the second row folded flat, the Arteon can swallow about 55 cubic feet of bric-a-brac.

From the A-pillar back, the Arteon's design isn't hiding any surprises. It's standard-fare VW design with a CC-esque roofline transitioning into a rear end that stretches Passat-like design elements around Audi A7-like proportions. Up front, however, the Arteon stands apart from the rest of VW's lineup with a massive grille that takes up nearly the entirety of the sedan's fascia, even integrating the standard LED headlamps and fog lights into the sweep of horizontal chrome bars. Just behind that grille is Volkswagen's first clamshell hood, stretching from VW logo to windshield and flowing over the sides where its cutline integrates into the wheel arches. 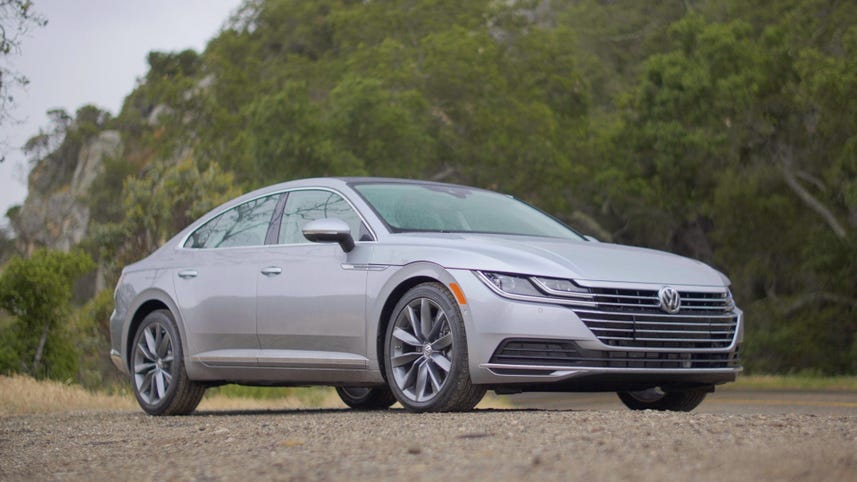 All about that boost

Beneath that metal clamshell hood, you'll find the only engine available for the new Arteon: VW's 2.0-liter turbocharged four-cylinder engine with 268 horsepower and 258 pound-feet of torque. Volkswagen is not offering the Arteon with a V6 option. I don't think most drivers will miss the eight extra ponies and eight additional pound-feet that VW's current 3.6-liter V6 engine would offer, so I'm okay with just the boosted four-banger.

The 2.0T sends power to the front wheels via an eight-speed automatic transmission with paddle shifters should you feel like choosing your own adventure. Volkswagen's 4Motion all-wheel drive system is optional for all trim levels, and standard on the top-level SEL Premium. Fuel economy for front-driven models is estimated at 22 miles per gallon city, 31 mpg highway and 25 mpg combined. With all-wheel drive, the Arteon steps down to 20 city, 27 highway and 23 combined mpg.

Drivers are able to toggle between Normal, Comfort, Eco and Sport drive modes via a button on the center console. These modes affect the behavior of the responsiveness of the steering and throttle, the effectiveness of the climate control, the swing of the adaptive lighting and, of course, the firmness of the standard Dynamic Chassis Control (DCC) active-damping suspension. A fifth Custom drive mode grants drivers even more fine-tuned control over the active dampers with 15 degrees of firmness adjustment stretching even beyond the defaults for those who might want a ride stiffer than Sport or softer than Comfort.

Every Arteon features standard front and side assist safety features. The former rolls a forward precollision warning system in with pedestrian detection and automatic emergency braking, while the latter is an upgraded version of blind-spot monitoring that also watches for vehicles that are about to enter the blind spot when changing lanes. Rounding out the list of standard safety features are a rear camera, rear cross-traffic alert and post-collision braking that engages the brakes after an impact to reduce the likelihood rolling into a secondary collision.

On the road, the Arteon feels light, comfortable and very familiar. The modular nature of the MQB platform that underpins it means that I've already experienced (and enjoyed) this suspension, this engine and steering feel in vehicles like the Atlas, Tiguan and Golf. On the surface, the Arteon plays like VW's Greatest Hits, but it's also a remix with a unique twist on the familiar.

The ride is smooth and pleasant with an ease to the steering that feels light, but not numb, with a responsiveness and directness that I find satisfying. The turbo-four is a good fit for a vehicle of this size, delivering good off-the-line performance and responding to a heavy right foot with ample acceleration.

However, the Arteon doesn't necessarily like to hustle. Even in Sport mode, the gearbox is too eager to upshift and the engine sounds buzzy and wheezy at higher revs. Choosing my own ratios with the paddle shifters makes the experience more rewarding, but while the Arteon was happy to dance to and fro on a highly technical road, it never felt completely comfortable doing so. And while you could, I can't imagine why anyone would want to push the DCC beyond the Sport firmness on a vehicle this size.

Rather, Arteon feels completely in its element at a spirited pace on a more relaxed country road or highway, where I could enjoy the more premium aspects of its powertrain, suspension and cabin appointments. It's a very engaging drive for a large-ish midsize sedan, but I'd leave the canyon-carving to the GTI.

The Arteon will face an interesting mix of challengers when it arrives in dealerships later this year, but the closest comparison is the 2019 Kia Stinger 2.0T. The two sportbacks are similarly sized and boast very similar tech and performance. The Stinger bends more sporty while the Arteon pushes more premium at a price that is higher, but still competitive with the Kia.

The 2019 Volkswagen Arteon starts at $36,840, including a $995 destination charge, for the base SE model. 4Motion all-wheel drive is an additional $1,800. In between is the $40,990 SEL trim that adds adaptive headlamps, Nappa Leather, digital cockpit and adaptive cruise. At the top of the line is the SEL Premium with a power handsfree liftback, massage seats and all of the driver aid features for $45,940 delivered.

It's not the biggest or most expensive model in Volkswagen's lineup -- those accolades belong to the Atlas. But as the brand's chosen flagship, the 2019 Arteon puts its best foot forward both as its own vehicle and as a balanced representation of VW's design and performance ideals and most premium features.