For only a small loss in economy, the Prius adds a must-have feature for Snowbelt drivers.

The Toyota Prius is something of a known quantity at this point. The world's best-selling hybrid nameplate, it's probably hard to find someone who hasn't heard of the fuel-sipping car. This year, Toyota has a new way to attract even more buyers to the Prius lifestyle thanks to the addition of all-wheel drive as an option.

The 2019 Toyota Prius AWD-e is crazy fuel-efficient and easy to drive.

Getting all-wheel-drive traction in a Prius requires few sacrifices.

It's the first major update for this generation of the Prius, which went on sale in the US in 2016. But with much of the Prius' appeal predicated on its fuel economy and affordability, does the new AWD-e model require big sacrifices on either front?

The Toyota Prius AWD-e is equipped for inclement weather

For the most part, the 2019 Toyota Prius AWD-e has the same powertrain as any other model. Up front is a 1.8-liter gasoline four-cylinder and an electric motor-generator, which deliver a combined 121 horsepower. However, where the front-wheel-drive Prius has a 3.6-amp-hour lithium-ion battery pack, the AWD-e uses a 6.5-amp-hour nickel-metal hydride pack. Toyota says a key consideration in using the NiMH pack is its reduced susceptibility to cold weather -- i.e. the types of snowy weather in which one might be driving an all-wheel-drive Prius. The final change is at the rear axle, where the Prius gains an electric motor rated for 7 horsepower and 40 pound-feet.

That's not a whole lot of power for the rear axle, but the point is not to make the Prius all-wheel-drive all the time. Rather, the goal is to add just enough push at the back tires to get the car unstuck on slippery surfaces -- snow, ice, gravel or maybe rainy pavement.

As such, the motor is only used at low speeds. It's always active when accelerating from rest up to 6 miles per hour. Then between 6 and 43 mph, the motor only kicks in if the front wheels slip. Again, that's not going to give a Prius Audi-like handling, but it should make it a little easier to get going in inclement conditions.

Of course, a note: All-wheel drive only helps with acceleration in snow and ice, not braking or steering. If you're regularly driving in severe winter conditions, you'd be well advised to install proper winter tires to your Toyota Prius, regardless of the drive wheels. My test car's Dunlop Enasave rubber is focused on low-rolling resistance, not necessarily ultimate snow and ice performance.

Of course, by the time I had a chance to drive the Prius AWD-e, it had finally stopped snowing in Michigan, so evaluating that low-speed traction proved a little tough. But on days with torrential rain, the Prius pulled away from a stop without any wheel spin, and the occasional dirt or gravel road likewise proved no challenge at all.

Otherwise, this car drives just like a standard Toyota Prius. Though the AWD-e is 145 to 170 pounds heavier than an equivalent front-drive model, you won't feel much of a difference from the driver's seat.

Overall, the Prius is set up quite well for everyday suburban commuting. The powertrain serves up its power smoothly and unobtrusively, the ride over potholes is soft and there's great visibility in every direction, thanks to a low beltline and big windows. Around town, power is adequate enough. On the highway, though, the Prius is slow to accelerate and admits quite a lot of wind and road noise into the cabin; test-drive and consider carefully if you want to use this car for long freeway commutes.

Still, the Prius has floaty, disconnected handling and vague steering that do little to inspire confidence in the driver. It also has a poor sense of straight-ahead on the highway, so I feel like I'm constantly making little corrections at speed. And the gasoline engine sounds unhappy and strained when called on to deliver lots of acceleration.

Break up with the gas station

The most important question about this car, however, is how adding all-wheel drive affects fuel economy. The difference is actually small; the AWD-e LE and XLE are EPA-rated for 52 miles per gallon city, 48 mpg highway and 50 mpg combined. That's only 2 mpg less, in each category, than an equivalent front-wheel-drive Prius. And, for what it's worth, this is the most fuel-efficient, non-plug-in, all-wheel-drive car you can buy today.

Those are just the window-sticker numbers, generated from lab tests, though. In the real world, the Prius delivers even better numbers without much effort at all. In suburban driving I routinely see mpg figures in the high 50s and low 60s. And that's without hypermiling or driving 10 mph under the speed limit. The Prius is an extraordinarily efficient car -- even with the extra weight and complexity of AWD. Couple those economy figures with an 11.3-gallon fuel tank and you can drive long distances between fuel stops.

The Toyota Prius has a functional and easy-to-use cabin. There are some weird elements, like the dorky blue-plastic shifter and the center-mounted instrument cluster, the latter of which puts some important advisory lights (headlights, parking sensors, airbag warnings, active-safety lights) way far out of the driver's eye line on the passenger side of the dash. Still, a bold digital speedometer and color trip computer are easy to read at a glance, and while it's frustrating they're not right in front of me, there is a head-up display that shows my speed, too.

All of the interior controls are straightforward to use and get to grips with. I might not choose the two-tone treatment of my tester, but overall the cabin materials are fine -- certainly it feels more economy-car than other cars touching $30,000, but that's because much of the money goes to the Prius' hybrid powertrain.

Among the changes for the 2019 model year are extra piano-black plastic trim, which looks good but is prone to attracting fingerprints, and two extra 2.1-amp USB ports for rear-seat passengers to juice up their gadgets. There's also a wireless charging pad up front, though its flat, slippery surface doesn't hold my phone in place and I routinely find it stops charging after the first corner.

It's roomy, with loads of headroom in the front row, though as in many Toyotas, the steering wheel doesn't adjust high enough or retract far enough into the dash; I feel like the wheel is almost resting on my lap. In the back seat, there's a good amount of leg- and headroom for adults, too. The hatchback cargo area offers 24.6 cubic feet of storage space with the back seats raised, better than a Mazda3 hatch, expanding to 62.7 cubic feet with them lowered.

The Prius also got a mild update on the outside for 2019. I'd be hard-pressed to identify the changes at a glance -- they include a new front bumper and new lights -- and overall the car still looks like a Prius. That's a bad thing in the sense that it still looks a bit dorky and futuristic, but a good thing in the sense that the styling keeps aerodynamic drag low and signals to other drivers, "Hey, this person is driving a hybrid." For a lot of Prius shoppers, it's a plus to drive a car that's unequivocally identifiable as a hybrid. 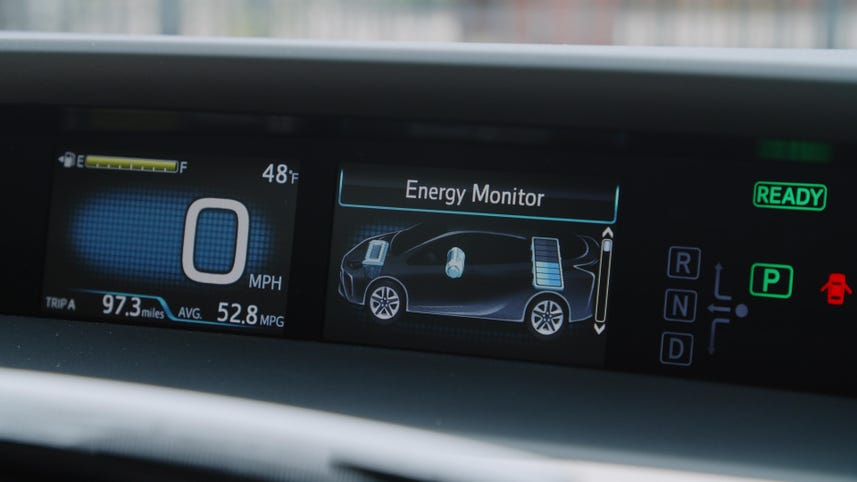 For all the technology under the hood, the Prius' in-car tech disappoints because it's far more basic than what you get in rival cars -- things like the Honda Insight, Hyundai Ioniq and Kia Niro, for instance. For infotainment, most models use a 6.1-inch touchscreen with AM/FM radio, Bluetooth, a CD player and aux and USB inputs. The system works well enough, with easy-to-use menus and physical shortcut buttons, though its graphics aren't especially fancy. There are also displays to show the car's fuel efficiency.

But the system doesn't offer modern tech like Apple CarPlay or Android Auto, nor does it even offer built-in navigation or satellite radio. Those last two features are offered on the Prius Limited, which uses an 11.6-inch touchscreen -- but that system isn't available even as an option on any other Prius trim. And the Limited is not available with AWD-e.

Things are much better on the safety front, with the 2019 Prius equipped as standard with pre-collision warning and braking, lane-keep assist, adaptive cruise control and automatic high beams. All but the base Prius L has parking sensors and blind-spot monitoring, too.

The final gold star for the Toyota Prius AWD-e comes in the form of its affordable pricing. Compared to front-wheel-drive models, the AWD-e costs only $1,400 extra in its LE trim level and $1,000 extra in XLE form. Including destination, the cars cost $27,310 and $29,750, respectively. That means you can get a 50-mpg, all-wheel-drive car for below $30,000, a very good deal indeed. With a handful of minor options, my test car rings in at a still-approachable $32,113.

At first blush, adding cost and reducing the efficiency of a Toyota Prius seems like a bad deal. But the 2019 Prius AWD-e asks only the smallest sacrifices of its drivers. It's difficult to put a price on the extra confidence a driver might get from having all-wheel-drive in inclement weather -- to say nothing of actual performance improvements. The Prius still has all the same pros and cons as it ever did, but adding all-wheel drive should make the car even more appealing to buyers in the Snowbelt.