The basic job description for a hot hatchback is straightforward enough, even if it comprises somewhat opposite demands. Such a car has to engage and thrill the driver whenever traffic clears or the road gets twisty, and maybe even handle an occasional trip to an open track day. Yet it also needs to deliver respectable fuel economy, a compliant ride and a quiet enough cabin that it can be your only car, day-in, day-out.

The 2019 Hyundai Veloster has a punchy engine, engaging manual transmission, plenty of practicality.

Tons of fun for everyday driving, the 2019 Veloster is an excellent value compared to rivals.

The first Hyundai Veloster Turbo did an OK job at satisfying all those requirements, but it didn't particularly excel at either side of the coin. With the funky hatchback now in its second generation, however, Hyundai has doubled down on both the sportiness and sensibility of its turbocharged compact.

The 2019 Hyundai Veloster Turbo is entertaining yet affordable

The Turbo suffix obviously refers to this car's engine, a 1.6-liter turbocharged inline-four offering up 201 horsepower and 195 pound-feet of torque, the latter from just 1,500 rpm. An overboost function temporarily cranks that torque rating up to 202 pound-feet during maximum acceleration. That's comparable horsepower to most rival cars; obvious competitors to the Veloster Turbo include the Volkswagen Golf GTI (220 horsepower), Ford Focus ST (252 horsepower) and Honda Civic Si (205 horsepower).

The Turbo model's output is also, incidentally, a nice middle-ground in the Hyundai Veloster's overall powertrain lineup. The base car's 2.0-liter inline-four offers 147 horsepower, while the racy Veloster N will pack 275 horsepower when it goes on sale at the end of this year.

On the road all that power and torque is delivered easily and often. The turbocharger spools quickly, without any of the off-the-line laziness that afflicts some of this car's competition. Instead, you get a frenetic, urgent punch all the way through the rev range. Unfortunately, the rev limiter comes on quite early and, at least seemingly, before the rev marks on the tach, so pay attention when hurtling through the short first gear. The engine's abundantly torquey nature also means you don't really need to do a whole lot of downshifting; accelerating in sixth on the highway is plenty feasible.

Working the six-speed manual transmission is a joy, amplified by the lovely mechanical feel of the B&M-developed linkage that's unique to this R-Spec trim level. It works hand-in-hand with the positive, weighty feel of the clutch uptake. The large, round metal shift knob -- also exclusive to the Turbo R-Spec -- is delightful to hold, though it gets toasty after the car has sat in the sun and will likely be chilly on winter mornings.

Small matter: running the Veloster Turbo through the gears is a joy, especially thanks to the very short shift throws and pedals that facilitate heel-toe maneuvers. The tight gate spacing is mostly fine for city driving, too, though in the first few-dozen miles of city driving it's not impossible to find fourth gear instead of second when downshifting.

Hyundai's engineers have tuned a just-right chassis for the Turbo, with well-damped body motions and well-controlled roll. To reduce understeer, the stability control automatically squeezes the car's inside brakes during tight bends. Though there's no limited-slip differential to keep the engine's torque in check, Michelin Pilot Sport 4 tires provide more than enough grip for street driving in every direction. One caveat is that the sticky rubber comes only on manual-transmission Turbos. Equip the optional seven-speed dual-clutch transmission and you instead get all-season tires, which is yet another reason to pick the stick.

The Veloster's suspension offers a typical hot-hatch ride quality: firm with some jarring over major bumps, but complaint enough that I'd be happy taking an all-day road trip or commuting in this car 12 months a year.

For all the quickness and directness in the steering gear, almost no feedback is transmitted back to my fingertips. And though stopping power is plentiful, the middle pedal's soft feel doesn't provide the braking confidence of competing cars. I also wish for a more evocative engine note. Though you can turn up the Active Engine Sound option to artificially augment the sound track, some more genuine exhaust snarl and intake honk would be welcome. The upshot is, however, that the Veloster's cabin is calm and quiet enough to a good commuter -- albeit with some engine drone and wind noise on the highway.

It's also a sensible car

When you're done hooning around, fuel economy is quite respectable. The Veloster Turbo is rated for 26 miles per gallon city and 33 mpg highway with the manual transmission (or 28/34 mpg with the dual-clutch). Those figures proved easily attainable in my test, and are midpack among similarly priced and similarly powerful competitors (better than a GTI or Focus ST, not as good as the ultra-thrifty Civic Si).

The Veloster's hatchback design also gives lots of practicality. While the exterior design results in a pretty high liftover height, cargo space of 19.9 cubic feet is close to what major rivals offer behind their back seats. Unfortunately, the 60/40 seats don't quite fold flat, leaving a noticeable lip in the cargo area. That's not to say it's not practical, though: With the back seats folded, I can fit a bicycle in the cargo area (with the front wheel removed) just as easily as in, say, a GTI.

There's enough leg- and headroom for adults to sit in the rear seat comfortably, but do note that there are just two seatbelts in back -- this is a four-seater hatch where most rivals will fit five people. And it's a bit of a hassle to remember that there's only a rear door on the passenger's side. Either make your friends all slide out of that side, or tilt the driver's seat forward and have them squeeze through that coupe-style opening.

The rest of the Veloster's cabin is smartly finished, with R-Spec models dressed up in tasteful amounts of yellow accents, a subtle checkered-flag motif on the passenger-side dash and snug-yet-comfortable gray cloth seats. Sure, the door panels wear a lot of unexciting black plastic, but overall the interior feels sporty without being over-the-top. There's phone storage ahead of the shifter, two useful cupholders and a decently sized center console compartment.

Watch this: Checking the tech in the 2019 Hyundai Veloster Turbo
01:59 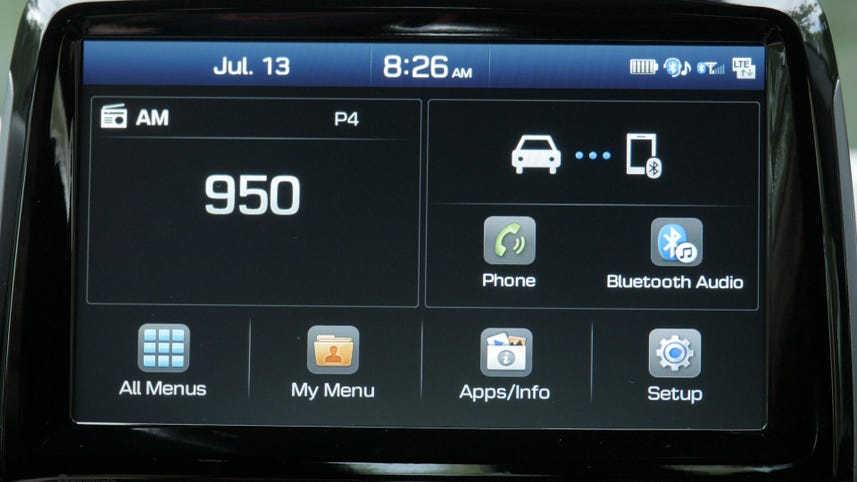 Checking the tech in the 2019 Hyundai Veloster Turbo
1:59
Watch Now

In terms of instrumentation, the Turbo R-Spec keeps it simple with analog dials and a trip computer. The speedometer's scale changes above 40 miles per hour to give better resolution at low speeds but a 160-mph max reading, a trick you'll see on other sporty cars but confusing at first glance. The 8-inch infotainment system is a cinch to use, whether you tap through the on-screen menus or use the physical shortcut buttons (you can program the star button to whatever shortcut you desire). Though built-in navigation is relegated to the pricier Turbo Ultimate trim, you can use Apple CarPlay or Android Auto to navigate via your smartphone. Moreover, the standard audio system sounds great, with lots of punch and clarity.

As to visual signifiers on the outside, look to black 18-inch wheels, a big roof spoiler, a center-exit dual exhaust and a red accent on the front fascia. The Veloster's sloped roofline and relatively low height (2.7 inches shorter than a VW GTI, for instance) help make the car look smaller than it is from the outside. R-Spec models have five color choices; while this tester's Thunder Gray is mature and understated, I like that a fun Sunset Orange hue is offered for more visual pop.

Although the R-Spec is fairly sparsely equipped, it's still the Veloster Turbo model I'd pick with my own money. At just $23,785 with destination, it represents outstanding value for this type of performance hatchback. Notably, it features pre-collision braking and lane-keep assist as standard, while neither is standard on rivals like a Focus ST, GTI or even the Civic Si. On the other hand, you don't get heated seats, power seats, a sunroof, automatic climate control or any other active-safety tech. You can get all those by upgrading to the Turbo Ultimate (heated seats, a sunroof, wireless phone charging, HUD, etc), though it's pricier at $27,535 with the manual or $29,035 with a dual-clutch transmission.

The most obvious praise for the 2019 Hyundai Veloster Turbo is that it requires no disclaimers. This isn't simply a car that is better than before or that presents great value for money. It's genuinely a ton of fun to drive, both around city streets and when you open it up on twistier roads. Yet it has the composure, maturity and practicality to be an everyday driver without fuss. All that adds up to a great, affordable hot hatchback.