The stalwart Honda Civic gets a few updates for 2019 that make it better than ever.

Honda is one of the few automakers that still offers an affordable, compact coupe. The Civic's sedan and hatchback variants might be the sales stars, but the two-door model adds a bit of personality to the otherwise pedestrian (I mean that as a compliment) package. I mean, just look at that Tonic Yellow Pearl paint job.

The 2019 Honda Civic Coupe comes standard with the Honda Sensing suite of driver assistance systems and the option of a peppy 1.5-liter turbo engine.

For 2019, all Civic models get a number of updates; reviews editor Jon Wong went over them in his review of the 2019 Honda Civic Sedan earlier this year. Those same niceties make their way to the coupe, making this compact two-door even easier to love.

Who knew the deletion of a volume knob would cause such an uproar? Certainly not Honda, which initially swapped it out for an annoying slider function that was slow to respond and not very precise. Happily, the 2019 Civic marks the return of this if-it-ain't-broke-don't-fix-it feature, and it's just one more feather in the Civic's in-car technology cap.

The Civic's standard infotainment setup is a 5-inch touchscreen, but my Touring trim has the larger, 7-inch option, complete with embedded navigation. This nav system has one-box entry for point-of-interest search, so you can just type in "ice cream" to get to your nearest Dairy Queen. However, entering an address requires clicking through multiple boxes, which is annoying. That said, I love the "exit services" feature, which shows what to expect off the next highway exit in the way of services like lodging, food and fuel. Without this I can't tell you how many times I've exited the highway expecting to see a gas station, only to wind up looking at Bubba's Wagon Wheel Diner.

Apple CarPlay and Android Auto are standard on all but the lowest Civic trim, but integration into Honda's infotainment system is kind of buggy. While dictating texts, CarPlay froze multiple times, causing me to have to pull over and unplug everything to restart. This could be a problem unique to this specific test car, but it still seems odd. 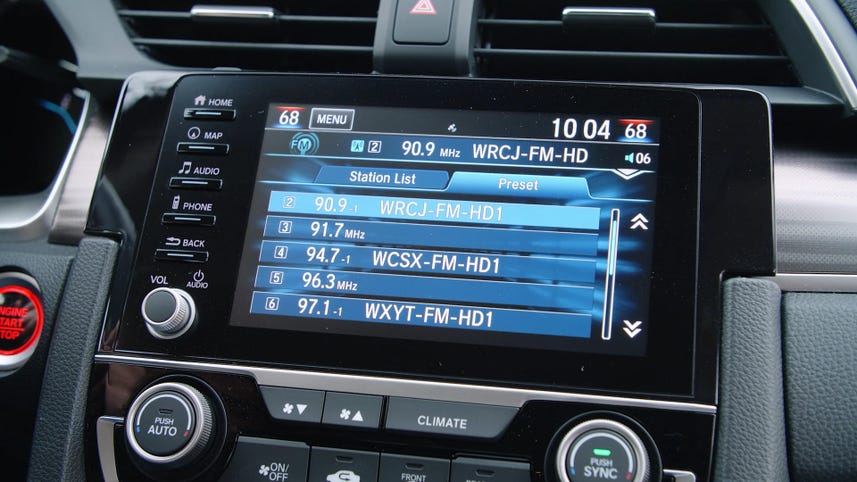 Another big tech win is the inclusion of Honda Sensing driver-assistance systems on all trims. Collision mitigation braking, lane-departure warning, forward collision warning, road departure mitigation and adaptive cruise control are now standard on all Civics. By and large, these functions work as advertised, but the forward collision warning is very sensitive, even on its least-intrusive setting. What's more, though the adaptive cruise control works at low speeds, the lowest speed it lets you initiate the system at is 13 miles per hour. So if you find yourself suddenly stuck in traffic, you can't turn it on.

My Civic Touring also comes with Honda's LaneWatch tech, which displays a video of the passenger-side blind spot when you turn on the right turn signal. It's great for keeping an eye on wayward cyclists near Roadshow's San Francisco headquarters, but it also interferes with the text dictation in Apple CarPlay. Finish and send your text before you signal, or risk losing it all.

Finally, Honda offers a decent, but not stellar, number of charging ports in the Civic. The center console of my tester has a 1.5-amp USB port and a 12-volt outlet, though lesser trims only get a single 1-amp USB port in the front. Rear-seat passengers are out of luck.

The Civic's base engine is a naturally aspirated 2.0-liter I4, but my Touring goes for the gold with a turbocharged 1.5-liter I4. This engine is good for 174 horsepower and 162 pound-feet of torque, the latter of which comes on strong at 1,700 rpm. A six-speed manual is available on the Sport-trim Civic, but my turbo Touring comes with a continuously variable transmission with paddle shifters that let you move through seven simulated gears. The CVT isn't bad, but it's nothing to write home about, either.

Driving the Civic is a treat, with precise steering that's quick to respond to inputs and has nice heft to its action. A few passengers commented about the ride feeling kind of harsh, but I think this car gives a great compromise between cushy and sporty. The Touring's 18-inch wheels and 235/40-series tires certainly don't help matters in terms of smoothness compared with smaller rolling stock setups.

The Civic is a decent fuel sipper, as well. The EPA says the 1.5-liter, CVT-equipped Civic will return 30 miles per gallon in the city, 37 mpg highway and 33 mpg combined. During my week of testing, I saw 32 mpg combined, which is pretty respectable, given my tendency to be a leadfoot.

The Civic's cabin is comfortable, with plenty of storage for smaller items. I like the pass-through in the front console that allows me to hide my phone's charging cords from sight. The seats are nice and decently supportive, and overall material quality is better than average for the compact class.

Since it's a coupe, passenger room and cargo space obviously aren't as robust as in the Civic's sedan and hatchback body styles, but I find the trunk's 12 cubic feet of space pretty adequate.

Overall, the interior look is much the same for 2019. Outside, however, you'll notice a few small tweaks. The Civic gets a new front fascia with revised LED headlights -- it makes the car look really sharp. And if you do spring for my tester's Tonic Yellow color, be prepared to grab the attention of everyone around you. Much like a person wearing a safety vest, this Civic absolutely does not fly under the radar.

The 2019 Honda Civic Coupe starts at a very affordable $21,680, including $930 for destination. My top-end Touring adds $6,100 to that base price, but there are definitely ways to get into a nice Civic Coupe for less money. Personally, I'd go for the Civic Sport, which costs $22,480, including destination. Sure, I'd have to make do with the 158-horsepower, 2.0-liter engine, but I can get the six-speed manual here, and a really nice set of standard equipment.

Honda's stalwart Civic remains a top pick in the class, and one of the only ways you can get a two-door on the cheap. The closest competitors are the Subaru BRZ and Toyota 86 twins, both of which offer a better driving experience, but cost a lot more money.

The best thing about the Civic Coupe is that it's as sweet and solid as any other Civic model. If you only need two doors, it's a well-rounded option that's loaded with features and tech.