There's a very good reason why the midsize crossover SUV class is so crowded: These things practically print money. Automakers are bolstering their SUV lineups with all sorts of entries in the not-too-big, not-too-small space, and with good reason. Forecasting group LMC Automotive says in the next three years nearly three-quarters of all new vehicle purchases will be utility vehicles -- trucks, crossovers and SUVs.

The 2019 Ford Edge features a whole slew of standard ADAS features and a peppy turbocharged engine.

Interior design is a bit dated and there are no USB ports for rear-seat passengers.

The 2019 Ford Edge isn't the most charismatic crossover on the market, but you could do a lot worse.

The five-passenger Ford Edge has been around since 2006, and this second-generation model has been with us since the 2015 model year. In an effort to keep the Edge relevant in this more-important-than-ever class, it gets a welcome overhaul for 2019. It's an update that couldn't arrive at a better time, and makes the Edge as competitive as ever. 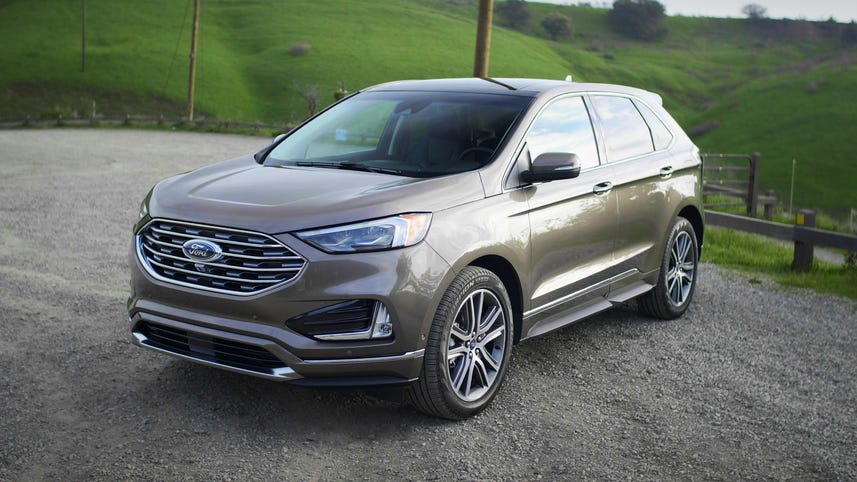 The 2019 Edge is available in SE, SEL and Titanium trims, all of which are powered by a 2.0-liter turbocharged inline-four engine. The previous Edge's naturally aspirated V6 is gone -- if you want a more powerful crossover, you'll need to step up to the 335-horsepower ST. The 2.0T engine can be paired with front- or all-wheel drive, and a new eight-speed automatic transmission handles shifting duties.

The turbo engine is actually quite peppy, offering 250 horsepower and 280 pound-feet of torque. Off-the-line acceleration is quick, the eight-speed automatic smoothly upshifting away in the background. (Downshifts, on the other hand, are a little lazy.) Press the "sport" button in the center of the rotary gear selector and the transmission will hold gears a little longer, and tightens up those downshifts. The Edge isn't all that sporty, however. If you want a great-driving midsize crossover, check out the Mazda CX-5, or again, step up to the hotter Edge ST.

Overall, the Edge offers a smooth, comfortable ride, soaking up most pavement irregularities. It's a great commuter car, and easily eats up long stretches of highway miles.

With front-wheel drive, the Edge nets EPA fuel economy ratings of 22 miles per gallon city, 29 mpg highway and 25 mpg combined. All-wheel drive lowers those slightly, to 21, 28 and 23, respectively. Happily, after a week testing the front-wheel-drive Edge, I saw 25.6 mpg. Considering Ford's EcoBoost turbocharged engines tend to have optimistic fuel economy ratings -- and considering I'm known to have a heavy right foot -- this is pretty solid.

Every Edge comes with Ford's new Co-Pilot360 suite of driver's aids, which includes blind-spot monitoring, forward collision warning with automatic emergency braking, lane-keeping tech, automatic high-beam assist and a backup camera. My tester goes one step further, adding optional adaptive cruise control with stop-and-go functionality, as well as lane-centering assist. The Edge's adaptive cruise control is nicely tuned for how real people drive, too. That is to say, it's quick to accelerate when a lead car moves into another lane, and isn't jarring as it puts distance between you and slower cars in your path. 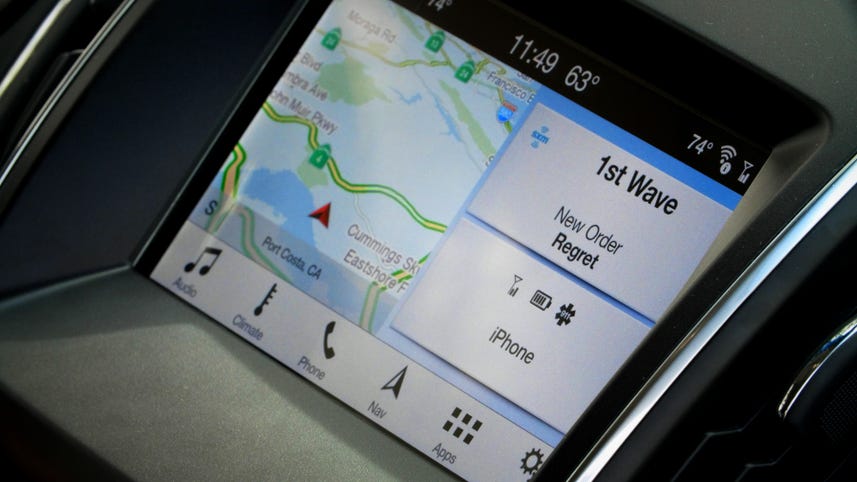 My only complaint with Ford's safety tech is the poor quality of the rearview camera. The resolution is so low it's almost blurry. Sure, the camera has a dedicated washer to keep it clean, but in this day and age I know we can provide higher-res tech.

Inside, the base Edge offers Ford's standard Sync system on a puny 4.2-inch screen. My tester, however, has the larger, 8-inch display running the more robust Sync 3 software. Apple CarPlay, Android Auto and a Wi-Fi hotspot are standard with Sync 3, and my Titanium test car has a wireless charging pad and two USB ports up front. Rear passengers only get a three-prong, 110-volt outlet.

Despite getting a full redesign, the 2019 Edge doesn't look too different from its predecessor. New wheel designs, updated front and rear fascias, different headlights and a wider grille round out most of the exterior updates. Done up in bright colors, the Edge looks pretty sharp. My test car's Stone Grey Metallic paint, however, doesn't do this SUV any favors.

Inside, the 2019 Edge is practically identical to its forebear, with physical buttons for the climate controls on a relatively bland center stack. It's nicely equipped in top-level Titanium spec, but the cabin can be a little noisy. I also think the gauge cluster is, well, a bit of a cluster. An analog speedometer resides front and center, flanked by two tiny screens that require reading glasses to see clearly (I'm not that old, OK?). Plus, these screens use Ford's old colors and fonts, not the newer, easier-to-read ones found on the Sync 3 screen.

The Edge is a five-passenger, midsize SUV, so it has lots of room for hauling cargo. Behind the rear seats you'll find 39.2 cubic feet of space, expanding to 73.4 cubic feet with the back bench folded flat. The Edge offers more cargo capacity than a Jeep Grand Cherokee, Nissan Murano or Subaru Outback.

Me? I'd stick with a midgrade Edge SEL, which starts at $33,300, and add the $2,880 201A package (who names these things?) to get heated front seats, an upgraded stereo, dual-zone climate control, LED running lights and Sync 3 infotainment. For an extra $780 I can add adaptive cruise control to the already impressive Co-Pilot360 roster. Of course, adding ACC means you're forced into embedded navigation. Even so, all told, my loaded SEL comes in at $37,470. That's several thousand dollars less than the Titanium seen here, but feels just as nicely equipped.

That prices the Edge competitively against other two-row, midsize SUVs, and you can certainly do a lot worse. It's roomy, comfortable and has a nice helping of onboard tech. It's not the most rugged midsize SUV, and it's certainly not the most dynamic. Instead, the 2019 Ford Edge plays it down the middle. For most shoppers in this class, that's perfectly fine.