I spent a lot of time in Roadshow's long-term Mazda MX-5 Miata, tackling daily commutes, going on road trips and tracking it on numerous occasions. Minus its brake fade issues when driven really hard, I loved the little roadster. With that said, it seems natural that I would be equally enamored of the 2019 Fiat 124 Spider Abarth. After all, this Italian two-seater is built upon the Miata's excellent platform. But with its own exterior design, unique suspension tuning and turbocharged engine, would I like it enough to make me push the Miata aside?

The 2019 Fiat 124 Spider Abarth's turbo engine sounds the business, and this roadster features an excellent ride and handling mix.

The 2019 Fiat 124 Spider Abarth is an entertaining and comfortable drop-top sports car.

Unlike some visually indistinguishable platform-sharing cousins like the Subaru BRZ and Toyota 86, the Fiat 124 Spider is a fair bit different from the Mazda Miata. It wears its own sheetmetal, and is a full 5.5 inches longer than the Miata. Fiat says the 124's styling inspiration is borrowed from the original Italian roadster, bringing cues like the inset headlights, grille, hood ripples and side character lines to today's car. The performance-focused Abarth strikes a sportier pose with unique front and rear fascias, gunmetal accents and 17-inch wheels. Do I like the look? I don't mind the more mature appearance, but I do like the Mazda's more aggressive lines better overall.

Miata-Fiat differences more or less vanish once you step inside. With the exception of different gauges, door panels, small trim bits and badges, it's a Miata cabin in the 124 Spider. The Fiat, however, is quieter when rolling around town with the top up thanks to an acoustic windshield, thicker rear glass and additional sound insulation for a more relaxing ride.

The onboard technology is also borrowed from Mazda. Infotainment duties are handled via the Mazda Connect system that's referred to as Fiat Connect in the 124, with a responsive, 7-inch touchscreen. In my Abarth test car it features onboard navigation, a nine-speaker Bose audio setup, satellite radio and Bluetooth. Sadly, it doesn't have Apple CarPlay or Android Auto.

A few safety tech goodies can also be had in the 124 Spider. Blind-spot monitoring, rear cross-traffic alert and rear parking sensors are packaged into a $1,495 Comfort and Convenience Group that also includes an auto-dimming rearview mirror, heated exterior mirrors and an alarm.

Where the 124 deviates a lot from the Miata is in the engine compartment. Instead of Mazda's naturally aspirated 2.0-liter I4 with 181 horsepower and 151 pound-feet of torque, the 124 Spider uses Fiat's 1.4-liter turbo I4, with 160 hp, 184 lb-ft and a gravelly exhaust note. Put it Sport mode and the turbo engine's peak torque is available from 2,500 rpm and stays strong through the high 5,000s before tapering off.

The midrange grunt is stellar to have at your disposal around a racetrack like GingerMan Raceway in South Haven, Michigan. Down the long back straight, triple-digit speeds are easily achieved, and carrying a good head of steam out of corners is easily done. Throttle response isn't as lively as with the Miata's naturally aspirated engine, but the Fiat's setup is fine for rev-matching when downshifting the six-speed manual transmission.

With the 124's engine always wound up on track, its turbo lag issues get masked. Unfortunately, on the street, in stop-and-go situations, it's on full display. Not much happens when rolling away from stops as boost builds, and then you suddenly get a wallop of thrust. The 124 Spider is at least decently efficient, though, returning an EPA-estimated 26 miles per gallon in the city and 35 mpg on the highway. On my non-racetrack tanks of fuel, I averaged 30.5 mpg. 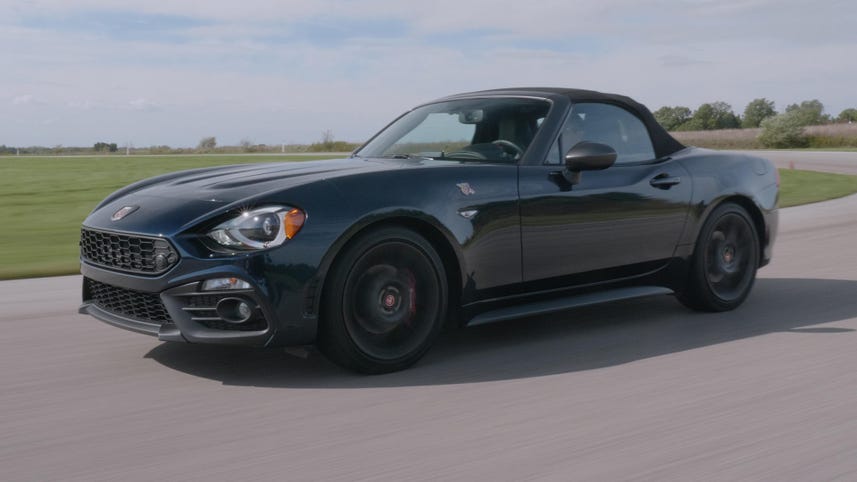 The Abarth's ride and handling on the street are another strong suit. There's some give tuned into the Bilstein shocks and uprated springs. Impacts from bigger road imperfections are felt, but not uncomfortable in the slightest, making the 124 well suited for normal commutes and weekend road trips. When blitzing my favorite winding backroad with some gusto, the Fiat is responsive, but not quite as responsive as a Miata.

The 124's slightly muted reflexes are more apparent around GingerMan Raceway. At corner turn-in, it takes a second for the outside tire to load up and track through. Through the high-speed transition between turns eight and nine, weight transfer is more pronounced before the body takes a set, and the 17-inch Bridgestone Potenza RE-050A tires dig into the pavement. (It's worth noting that the Fiat 124 Spider weighs about 138 pounds more than an equivalent Miata.)

Make no mistake, the Fiat isn't a bad performance car, but its personality is a little less hyperactive than the Mazda. It's definitely still a handler, with a balanced chassis that you can have a lot of fun with on a road, and track hanging on tight around turns or sideways in a controlled manner with the turbo thrust. Unlike in the Mazda, the Brembo brakes oddly suffered much less brake fade when beat on, which is a plus.

Performance is the main focus when building my 124 Spider Abarth, a roadster that starts at $29,290, not including $1,495 for destination. From there I'll equip the $1,495 Brembo brakes, $995 Record Monza Exhaust for the growling soundtrack and $1,195 Recaro seats to keep me locked down during hard driving. The one non-performance-related option I'll take is the $1,495 Comfort and Convenience Group, mostly to get blind-spot monitoring.

The options spending spree brings the price tag of my Spider to $35,965. That's only a touch more affordable than the $37,655 example pictured here, but more performance usually doesn't come cheap.

With a proven foundation from the MX-5, it's darn near impossible to not like the Fiat 124 Spider Abarth. I don't mind its wrapper, softer suspension tuning or turbocharged engine -- all of these give the Fiat a distinct and tamer personality.

But would I choose it over a Miata? In short, no. Good as the 124 Spider is, the Mazda Miata's snappier reflexes, more linear power delivery and meaner look make it the one for me.