The boisterous muscle car already had a killer engine, and now it's got even more grip with which to exploit that power.

The Dodge Challenger is not exactly the newest car on sale today; this version dates back a decade. Yet Dodge has managed to keep its muscle coupe feeling fresh by rolling out new versions regularly. From more horsepower to special-edition models, and from extended color palettes to go-fast options, there's seemingly a new Challenger every year.

The 2020 Dodge Challenger has a ferocious engine, plenty of grip to use it and a head-turning soundtrack.

It's still a big, heavy car and not particularly fuel efficient.

No car better lets you relive the muscle-car dream today than the 2020 Dodge Challenger -- and this version is the one to get.

For all the changes, though, the basic nature of the Dodge Challenger remains the same. It's got big, brash personality with the driving fun to back it up. And in no version is that truer than this R/T Scat Pack Widebody -- a car with nearly as many syllables in its name as horsepower under the hood.

Decoding the myriad changes to the 2019 Dodge Challenger is as simple as figuring out the tax code, but in a basic sense, this R/T Scat Pack model benefits from components developed for higher-performing versions. The Widebody treatment, for instance: the fender flares, which widen the car by 3.5 inches, were designed for the quarter mile-roasting Demon before trickling down to the Hellcat and, now, Challengers with this test car's 6.4-liter Hemi V8. So too do the "air catcher" headlights, which were introduced on the Hellcat. Hollowed-out, they permit more cooling air into the engine bay.

The biggest update to this particular model is that the Widebody treatment gives the Challenger much more grip. The R/T Scat Pack has had the 6.4-liter engine, with 485 horsepower and 475 pound-feet of torque, for some time. But the fender flares allow for fitting 305-section-width tires at each corner, whereas before the widest tires offered were 275s (click here for a refresher of what all these tire codes mean). That means more grip and, thus, more performance.

By the numbers, that makes for improvements in both going and stopping: the R/T Scat Pack's quarter-mile time falls by a claimed 0.2 seconds to 12.1, while -- along with the addition of six-piston Brembo front brakes -- 60-mph-to-zero braking shortens by 3 feet.

Fortunately, all that extra rubber has done little to tame this car's rambunctious attitude. With just a side-step of the clutch or blip of the throttle, it'll haze the Pirelli P-Zeros, roar like something straight out of the 1960s and tear away from other traffic. The 6.4-liter engine sounds phenomenal and delivers absolutely gigantic amounts of power. Yet it's not so overwhelming or overpowering that I can't exploit or enjoy it on a public road. The license-endangering Challenger Hellcat this is not.

Adding to the enjoyment are the long, heavy and mechanical shifts from the Tremec six-speed manual gearbox. No, it's not the type of slick transmission you can shift with two fingers. Instead, each shift requires a bit of muscle and a bit of heft, and there's a satisfying mechanical feel as the transmission slots into gear. Gears one through four are closely spaced for incredible pace; five and six are such tall overdrives (for fuel economy) that you'll be surprised how often you need to downshift on the highway.

If only the throttle tip-in weren't so jumpy and the pedals better placed for heel-toe action, this transmission would be perfect. The optional eight-speed automatic probably suits the laid-back, big-power nature of the Challenger a little better -- but it just isn't as much fun.

It does corners, too

It goes without saying that the 12-inch-wide tires allow this Challenger to generate a lot of cornering grip. Even more impressive is the car's composure pointing into bends, thanks to the upgraded anti-roll bars, stiffer springs and three-mode adaptive dampers of this Widebody version. The Dodge is seriously poised and accurate when directed along twisting roads. The new Widebody package also pays dividends here: Dodge says that on a 2.1-mile road course, the new model would turn in lap times two seconds quicker than last year's Scat Pack.

That's not to diminish this car's portliness. Claimed at 4,308 pounds, this Challenger is 565 pounds heftier than a stick-shift Ford Mustang GT, and 9 inches longer than one, too. That just makes it all the more impressive that the Challenger, while far from dainty or nimble, handles turning and stopping as well as it does. As to that latter part, six-piston Brembo front brakes clamp down hard, with a pleasantly firm pedal feel that makes reigning in the rampaging V8 a cinch.

To keep you entertained when you're not exercising the car's performance, the Dodge Challenger features the familiar Uconnect touchscreen infotainment system. With quick responses, big buttons that are easily legible at a glance and a simple menu structure, it remains one of our favorite in-car systems. Apple CarPlay and Android Auto are both supported. A reconfigurable color instrument cluster puts plenty of information right in the driver's sightline, too. 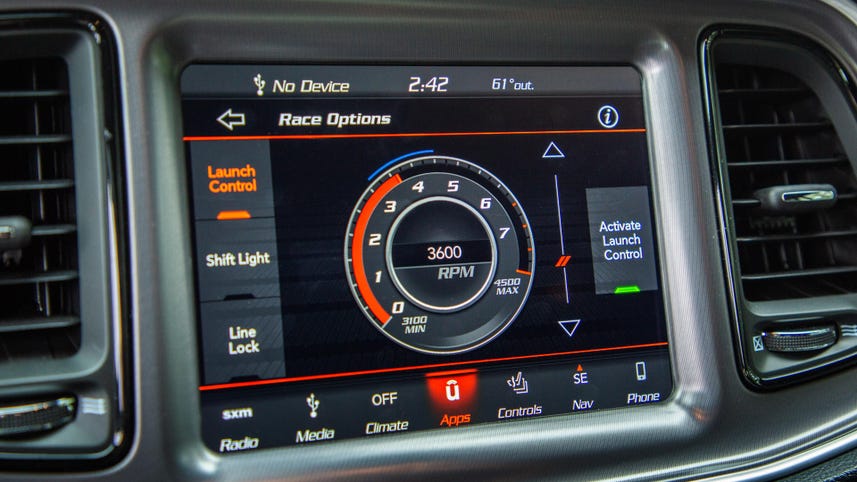 Checking the tech in the 2019 Dodge Challenger
1:58
Watch Now

The active-safety roster is hit-or-miss. Blind-spot monitoring is included as part of the Driver Confidence package that also includes HID headlights. Adaptive cruise and forward-collision warning are only offered on automatic-equipped Challengers, however, so it's not featured on my test car.

Being a performance model, the Challenger's touchscreen also has go-fast options. Electronic line lock, which holds the front brakes so you can do burnouts, as well as launch control with an adjustable rev limit, are newly optional this year. Various gauges in the instrument cluster and infotainment screen allow for monitoring details like engine output and fluid temperatures, while various timers permit measuring acceleration, braking and G-force figures.

The Challenger also wins big for being, well, big on the inside. The cabin is roomy in both rows of seats. Unlike a Camaro or Mustang, there are three seatbelts in back and enough space that adult passengers could fit comfortably for more than a brief jaunt down the block. Too, the Dodge's 16.2-cubic-foot trunk capacity shames the Ford and Chevy. You might wonder if that matters much in a performance coupe, but it could be what makes the Challenger a livable daily-driver car for some shoppers.

On the other hand, this engine is not the one to pick if you want daily-driver fuel efficiency. Though rated for 14 miles per gallon city and 23 mpg highway, the Challenger returned much worse economy in my care because I couldn't resist romping on the loud pedal. Of course, thrifty drivers will note that V6-equipped Challengers boast EPA figures as high as 19/30 mpg... they just don't accelerate as quickly or sound as invigorating.

Just like this. OK, the $55,550 as-tested price is a little hard to stomach, but this is the ideal Challenger configuration if you want to actually enjoy your muscle car out on the street. The 2019 R/T Scat Pack starts from $38,995, but you'll need to add a $1,395 destination charge and, on stick-shift models, a $1,000 gas-guzzler tax. Then the Widebody option itself is another $6,000, and that's before the handful of other small options (a sunroof is $1,195, for instance) that ballooned the car's price. Still, all-in my test car cost less than the entry price of the SRT Hellcat. Considering the horsepower and fun on offer, that's a great deal.

Of course, what's so endearing about the Dodge Challenger is that there's one for everyone. It starts at just $27,295 (before destination), offers anywhere from 305 to 797 horsepower and comes in all manner of bright colors. Car enthusiasts with a penchant for noisy, tire-screeching performance cars that put a big grin on their face will love the Scat Pack Widebody. But whichever version you choose, pretty much anyone will be able to comprehend the appeal of the Challenger's bold retro looks and immensely fun nature.