The 2019 BMW Z4 provides the basis for the new Toyota Supra, but this package is perhaps best enjoyed in premium roadster guise.

If you read editor-in-chief Tim Stevens' first drive of the 2020 Toyota Supra prototype and thought, well golly, that sure sounds promising, let me introduce you to the progenitor of that goodness. After all, it's no secret the new BMW Z4 and Toyota Supra were codeveloped. But when it comes to the most important parts -- the engine, chassis, electronics and lots of other oily bits -- it was the Germans who led the charge.

So yes, the new Supra looks to be a hell of a car, and one we're eager to drive in production spec next year. But it's all because the 2019 Z4, which goes on sale next March, is one of BMW's best-executed sports cars yet.

Let me get this out of the way right now: If there's one thing I'm not totally sold on, it's the Z4's design. Your eyes may or may not see things differently than mine, but as far as I'm concerned, even in the top-shelf M40i spec pictured here, the Z4 just looks, well, fat.

Compared to its predecessor, the new Z4 is 3.3 inches longer, 2.9 inches wider and half an inch taller. Yet it rides on a wheelbase that's an inch shorter in length, resulting in big overhangs, front and rear. The body sides are chunky. The rear end is kind of bulbous. And those angular vents on the front quarter panels? They're fake.

Happily, despite the increased dimensions, overall weight isn't any the worse for wear. Thanks to liberal use of lightweight materials, the base, four-cylinder Z4 sDrive30i tips the scales at 3,287 pounds. Sure, that's 277 pounds heavier than a Porsche 718 Boxster, but it's 20 pounds less than the outgoing Z4.

Besides, you don't have to look at the Z4 when you're driving it, and that's where this roadster really seals the deal. The Z4 is a perfect match for the ribbons of pavement that line the Portuguese coast, with a sporting character that's better than anything I've felt in many of BMW's recent products (save the new 8 Series, which is also a proper return to dynamic form).

We'll get the Z4 sDrive30i first, powered by BMW's latest 2.0-liter turbocharged I4. With 255 horsepower and 295 pound-feet of torque, the sDrive30i offers more oomph than the sDrive28i it replaces. But without any sDrive30i examples on hand at BMW's media event in Portugal, that's all I can say about that model right now.

Instead, let's talk about the super sweet Z4 M40i, the version with which the Supra will share its engine. The beating heart in question is a turbocharged, 3.0-liter I6, good for 382 horsepower and 369 pound-feet of torque. BMW says the M40i will sprint to 60 mph in 4.4 seconds, though that's almost half a second slower than a 718 Boxster S. That's with the eight-speed automatic left to its own devices, firing off perfectly timed shifts that are as quick as they are smooth. Sorry to say, but don't hold your breath for a manual transmission. As it is with the Supra, a stick-shift option will not be available on any US-spec Z4.

The key phrase in there is "left to its own devices." When using the steering wheel-mounted paddle shifters, gears don't change with quite the same urgency. Otherwise, the transmission behaves as it ought to, sending power to the rear wheels with expediency, a brap-fart from the exhaust with every upshift, a pop or crackle or two as the engine rev-matches and downshifts as I brake for a hairpin turn.

The steering, meanwhile, is full-stop excellent. Great on-center feel and high levels of through-the-wheel feedback highlight the helm-in-hand experience, with quick turn-in response allowing the Z4 to dart around corners with ease. If you're one of the many Bimmerphiles who believe BMW has lost its way when it comes to steering tuning, you'll find salvation in the Z4.

Chassis tuning is definitely on the softer side of what I initially expected, even in the sportiest Sport+ setting. The Z4 exhibits noticeable pitch and roll under braking and through corners -- nothing terrible, mind you, just takes a bit of getting used to. Thankfully, the staggered Michelin Pilot Super Sport rubber -- P255/35R19 up front and P275/35R19 out back -- offer plentiful grip, so once you get the hang of the increased body motions, you'll quickly train your brain to push harder and trust the tires.

That's especially noticeable on Portugal's Circuito do Estoril race track. Acceleration is hearty and unrelenting -- perfect for that hilariously long front straightaway -- but the Z4's body motions aren't flattering while negotiating Estoril's 2.6 miles of challenging corners. But it all makes sense, given Tim's similar track experience with the Supra. Here, too, the Z4's brakes exhibit high levels of fade, with noticeably reduced pedal feel after only a few sessions of journalist test laps. In the interest of full disclosure, I'll note that the Z4s tested on track were still-camouflaged prototypes, and not the fully baked examples driven on the gorgeous coastal road. Still, this track day was the same one where I tested BMW's new M850i Coupe. And given the choice to hit Estoril in one of those cars again, I'd pick the 8 Series, without hesitation.

Instead, it's out on those winding roads south of Lisbon, with warm sun and Atlantic breeze against my skin, where the Z4 roadster is truly in its element. This car can gobble up miles of great roads with ease, and with a quickness, too. The Adaptive M suspension softens impacts from less-than-pristine Portuguese roads, and the 50:50 weight distribution keeps the Z4 perfectly balanced.

I cannot stress enough that this is a sort of grand touring experience best enjoyed with the top down, though should inclement weather or passenger fussiness demand the soft top be raised, rest assured that the electronic operation takes just 10 seconds, and can happen while the car is driving at speeds up to 30 mph.

The cabin's a wonderful place in which to spend time, though I'll admit that with the black top raised, it feels a little claustrophobic. (All the more reason to drive top-down, duh.) You sit low in the Z4, with leather-trimmed seats that are plenty comfortable and supportive for a long day of spirited driving. The steering wheel in front of you is appropriately chunky, but thankfully, small in overall diameter. All materials found throughout the interior are some of BMW's best, with simple and elegant climate controls arranged horizontally across the center stack.

Move down to the center console and you'll find the small, electronic gear selector, with drive mode buttons to the left and infotainment controls to the right. A large dial manages BMW's latest iDrive 7 infotainment system, perched in a 10.25-inch display atop the dashboard. As seen in the new 8 Series and X5, iDrive 7 can be controlled either by this rotary knob, or by simply touching the screen. You can wave and point and twirl your fingers for various gesture controls, but I've said it before and I'll say it again: these are just plain silly.

The more I use iDrive 7, the more I like its reconfigurability and the speed with which it responds to commands. The menu structure is pretty familiar to me, a frequent user of iDrive 6, and with bright colors and crisp text, BMW's latest infotainment suite feels as top-notch as any in the class. So, too, does the 12.3-inch digital instrument cluster, which while not as pretty as Audi's Virtual Cockpit, offers a similarly high level of driver personalization.

I don't fully believe that BMW Z4 and Toyota Supra shoppers run in the same circles, so I'm not super worried about cross-cannibalization between these jointly developed sports cars. Pricing isn't yet available as of this writing, but it's safe to assume the BMW will come with a higher level of standard content, and a generally more premium aura, likely resulting in a costlier MSRP.

To that end, the BMW Z4 will do battle with the Porsche 718 Boxster and Boxster S, as well as the Audi TT and TTS and Mercedes-Benz SLC300 and AMG SLC43. I can even see the the base sDrive30i cross-shopped with the much less expensive Mazda MX-5 Miata, assuming you're just looking for open-top value for money.

But for folks who choose life with the Z4, they'll be rewarded with a car that's as effortlessly fast as it is enjoyable to drive, another great example that BMW has once again found its Ultimate Driving Machine mojo. As an open-top grand tourer, it's a car that'll endlessly impress, and offers enough tech and luxury to satisfy buyers of the well-heeled ilk.

It's no wonder the Supra shows such promise. 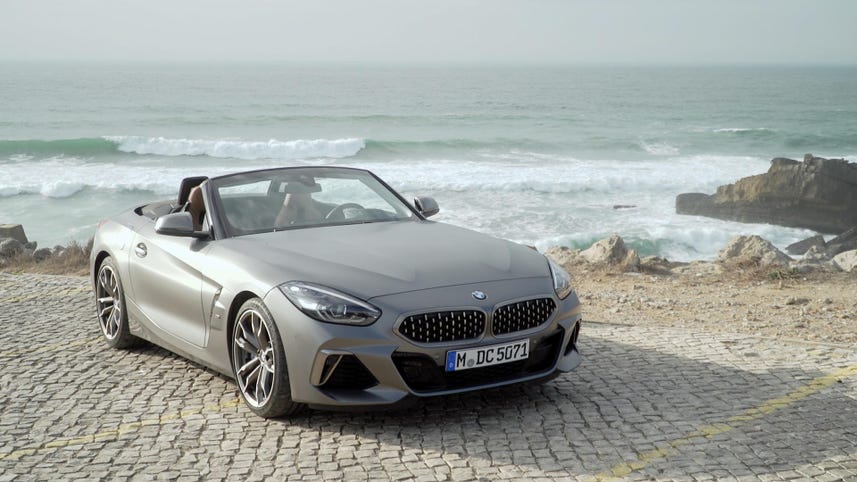