As fun as it is functional.

There's no other car that does bang-for-your-buck better than the Volkswagen Golf GTI. It's friendly and fun, comfortable and functional. And it's not terribly expensive, either. The GTI might not be the fastest or comfiest or techiest or anything-est on paper, but this is a case where the whole is far, far greater than the sum of its parts. If I had to buy a brand-new daily driver right now, there's no question: I'd get the a GTI.

Down on power compared with turbo toys from Ford and Subaru.

A refined and everyday-usable package with plenty of pep in its step, the Volkswagen GTI is our kind of daily driver.

For the 2018 model year the GTI family receives more performance and better tech, with a couple of visual nip/tucks for good measure. None of this upsets the fantastic GTI package -- rather, these enhancements strengthen the core values that have always made VW's hot Golf one of the best all-around performance bargains. Nothing else at the $30,000 price point checks all the right boxes quite like the GTI.

2018 Volkswagen Golf GTI is a hot hatch for grown-ups

I strongly believe that all performance cars are only as good as the base models they're built upon. So it's no surprise that a big part of the reason why the GTI is so great is because there's tons to like about Volkswagen's charming Golf hatchback.

That starts with design. The handsome Golf shape isn't done up with ambitious boy-racer add-ons; you won't find a big wing, hood scoop or fake fender vents on the GTI. Yes, the lower front fascia houses larger air intakes and vertically oriented LED fog lights. Yes, there's a red stripe along the grille that continues into the headlight housings. And yes, fan-like 18-inch wheels aggressively fill out the wells at all four corners. But parked next to a Ford Focus ST, Honda Civic Si or Subaru WRX, the GTI's inherent hooliganism is decidedly less obvious.

There's more Golf goodness inside, with an interior that's as upscale as it is usable. High-quality materials and great fit and finish are the highlights of the GTI's cabin, which on the whole looks and feels more premium than any of its competitors. My top-level Autobahn tester comes with leather upholstery, and while that isn't the way I'd spec my GTI (more on that in a minute), the seats are comfortable and supportive, as well as heated and power-adjustable. Buttons and knobs are kept to a minimum; the vehicle's controls are easy to locate and intuitive to operate.

Rear seat space is... fine. Head- and legroom are about average for the compact hatch segment. Which is to say, I wouldn't make a habit of transporting full-size adults back there on the regular, but for every now and then, the GTI is happy to accommodate.

The benefit to the hatchback shape, of course, is a plentiful cargo hold. With the rear seats in place, the GTI will haul 22.8 cubic feet of groceries 'n' things. Fold the seat backs flat to the floor, and there's a generous 52.7 cubic feet of space available, which bests the Focus ST's 43.9 cubic feet. Honda and Subaru, meanwhile, don't offer hatchback versions of the Civic Si or WRX. Sad trombone.

Better tech, but not the best

This GTI Autobahn comes with Volkswagen's latest MIB II infotainment suite, housed behind an 8.0-inch glass touchscreen that's now flush-mounted in the center console. With bright colors and crisp fonts, the GTI's interface is easy to read and navigate, and I love the proximity sensors that bring up control menus as your fingers approach the screen. Response times could be improved -- it's not quite Uconnect quick -- and man, there sure are a lot of menus to work through for car setup and driver assistance tech. Oh, and if you want the larger MIB screen, you have to get the upper-level SE or Autobahn trims. The base GTI S makes do with an older, smaller, 6.5-inch interface with physical buttons on either side.

Only Autobahn models come with factory navigation, but that's not a big demerit, as Android Auto and Apple CarPlay are standard on every single GTI. Volkswagen's Car-Net suite of remote app services is standard, as well, where owners can subscribe to various levels of remote safety, security, and roadside assistance packages for an annual fee. (Just remember that when your subscription runs out, that SOS button won't do anything.)

What I really want, however, is a version of Volkswagen's new Digital Cockpit -- itself a version of the Virtual Cockpit interface used in Audi's latest cars. Volkswagen only offers Digital Cockpit on the top trims of its Atlas and Tiguan SUVs for now, as well as the Golf R and e-Golf, and this tech can't democratize fast enough. That tiny display housed between the GTI's speedometer and tachometer is starting to look pretty outdated, by comparison.

As for driver assistance features, the GTI S comes with a rearview camera and... that's about it. SE and Autobahn trims get forward collision warning, automatic emergency braking and blind-spot monitoring. The Autobahn adds standard ParkPilot too, though considering the GTI's diminutive size and great visibility, parking assist is hardly a must-have feature. That said, a big reason to get the Autobahn is for its adaptive cruise control, which can even be had on cars equipped with a manual transmission. 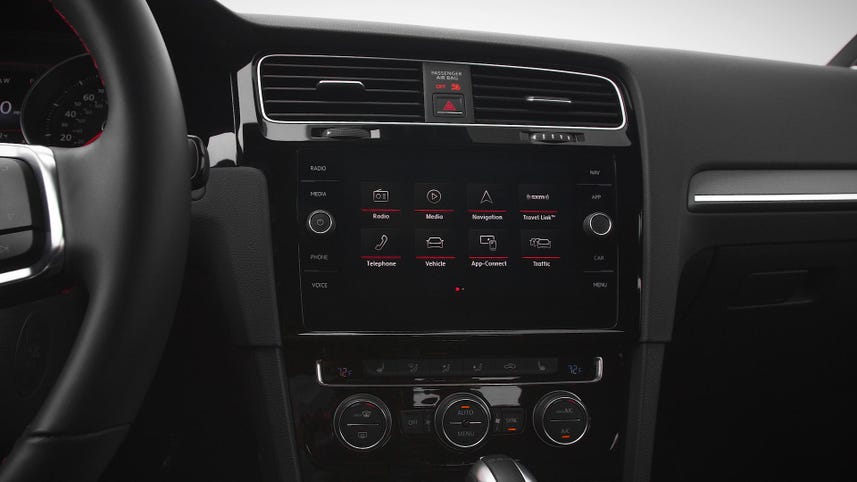 Daily driver and then some

At the risk of using a tired Goldilocks analogy, I'll just say my favorite thing about the GTI is how "just right" it feels in terms of being a sporty daily driver. The 2.0-liter turbocharged four-cylinder engine is familiar, making 220 horsepower and 258 pound-feet of torque in every version of the GTI. I make that distinction because, in the 2015-17 models, cars not fitted with the Performance Pack made just 210 hp. That's all been resolved for 2018, and SE and Autobahn models now come standard with the previously optional upgraded brakes (from the Golf R) and limited-slip differential.

The GTI's output numbers are outshone by the 252-hp Focus ST and 268-hp WRX, but it's the VW's finesse that makes it the one I'd want to drive every day. Around town, it behaves with tremendous civility, its linear wave of power offering ample thrust to dart around the infamous left-lane Prius.

That's not to say it isn't a formidable performer, of course. On the canyon roads outside of Los Angeles, I'm giddy as I toss the GTI into tight corners. The small, predictable amounts of roll are matched with crisp turn-in and cornering action that's nearly free of understeer, thanks to the GTI's trick XDS torque-vectoring front differential. Only the Autobahn trim comes with Volkswagen's DCC adaptive chassis control system, which adjusts suspension damping depending on the selected drive mode (Normal, Sport, Comfort, or choose-your-own-adventure Individual). Without having driven S or SE versions yet, I can't tell you if the DCC significantly changes the driving experience enough to make me flat-out recommend the Autobahn, but if my extensive experience in the pre-face-lift GTI is anything to go on, I suspect you'll find this hatch to be just as hot should you opt for a lesser trim.

My car's six-speed manual transmission is an absolute joy to use, with relatively short throws and a nicely weighted clutch pedal. It's easy to keep the turbo engine on boil, too -- up in the canyons, I can leave the GTI in third gear for long stretches of back-and-forth esses, knowing I'll never run out of power. You can get a six-speed dual-clutch automatic if you wish, but there's no real benefit. The shifts are quicker, sure, but the DSG gearbox costs more money, adds weight and doesn't offer any bump in fuel economy. In fact, the manual's EPA ratings of 25 mpg city, 33 mpg highway and 28 mpg combined all represent 1-mpg improvements over a DSG-equipped GTI.

The one I'd get

You can buy a GTI for as low as $27,265 (including $850 for destination), but the sweet spot in the GTI lineup is the midrange SE, starting at $30,470 with the six-speed manual transmission. You get the Autobahn's bigger brakes and limited-slip diff, as well as full LED exterior lighting and the larger 8.0-inch infotainment system. You don't get factory navigation, but you do get Apple CarPlay and Android Auto, both with integrated map functionality. Plus, SE models come with heated cloth seats done up in Volkswagen's iconic tartan print, and frankly, I wouldn't buy a GTI without 'em. Make mine Great Falls Green.

Every one of the GTI's competitors puts up a heck of a fight, all of them with praise points the Volkswagen simply can't match. The Ford Focus ST has a lot more power. The Subaru WRX has all-wheel drive. Honda's Civic Si comes in at a much lower price. So does the Hyundai Elantra GT Sport. But while those cars compromise their excellence in other areas, the GTI simply earns high marks across the board. It's not the best at any one thing -- instead, it's really good at everything. And it's this cohesive greatness that keeps the GTI at the top of its class year after year.