Porsche updates its most driver-focused 911 with a new 500-horsepower engine, suspension and aero tweaks and a manual gearbox option.

Enthusiasts grumbled when the previous Porsche 911 GT3 hit the scene offering only a dual-clutch gearbox. Even though the sequential manual pushed the performance envelope with faster shifts for better lap times, some Porschephiles still longed for a more involving driving experience that comes with three pedals. For 2018, there's good news for those manual transmission purists because the GT3 will once again be offered as a stick shift.

How is it? On roads throughout California's Napa Valley region, it's spectacular. Rowing through gears with the crisp short shifter is certainly more entertaining than flicking paddle shifters, and it makes perfect downshifts with its auto rev-matching, which can be turned off if you prefer to blip the throttle yourself.

Improvements to the 991.2 Porsche 911 GT3 don't end with manual transmission. There's a new 4.0-liter boxer six-cylinder engine in back cranking out 500 horsepower and 339 pound-feet of torque. That engine replaces a 3.8-liter unit making 475 horsepower and 325 pound-feet of twist. Redline remains a stratospheric 9,000 rpm.

For the bench racers out there, the new engine means a 60 mph time of 3.8 seconds and top track speed of 198 mph with the six-speed manual. When equipped with the dual-clutch, 60 mph happens in 3.2 seconds and top speed is 197 mph. The naturally aspirated beast also bettered its predecessor's Nurburgring lap time by 12.3 seconds with a 7 minutes, 12.7 seconds showing.

If for some reason you're wondering about the GT3's fuel efficiency, EPA ratings aren't available yet. For reference, the previous GT3 was rated at 15 mpg in the city and 20 mpg on the highway, so don't be shocked if the new car carries similar figures.

2018 Porsche 911 GT3 returns with a manual for driving purists

For street driving, you won't responsibly ever come close to maxing out the car's capabilities. Its abundant grip, coupled with weighty and responsive steering, lets it rocket through corners in a manner that will surely attract unwanted attention if you're not careful. It is a massively fun and communicative car to drive on the street.

While the racing-derived engine, responsive chassis and big wing means the GT3 does its best work on back roads and race tracks, it is rather livable when you aren't pushing it hard. Sure, tire noise finds its way into the cabin, but the suspension in Normal mode smoothes out impacts enough for ride quality suitable for a daily driver.

Infotainment centers on a 7-inch touchscreen, showing standard navigation with real-time traffic info, Google Earth imagery, Wi-Fi capabilities and an eight-speaker audio system. The system is also capable of running Apple CarPlay, but not Android Auto. Since the cars I'm driving are European-spec, I can't sample navigation, and admittedly didn't bother listening to any music because the engine noises are a better soundtrack than anything I could tune in to on terrestrial radio.

As much as I love the GT3 manual on the road, around an unfamiliar race track trying to keep up with a racing legend, it is a slightly different story. Thunderhill Raceway Park in Willows, California, is an intense 5-mile long road course filled with elevation changes and blind corners. Leading my run group is Hurley Haywood, who has collected multiple victories at the 24 Hours of Le Mans, 24 Hours of Daytona and 12 Hours of Sebring.

Around the track, the GT3 feels at home, offering quick turn in, but hurdle into a corner too hot and it begins to push, while Haywood inches further and further ahead. With a better idea of cornering limits, slicing through turns rapidly gets easier. However, I have to say that shifting gears is a bit of a distraction as I give chase.

Down straights, recalibration of my brain is needed because of the engine's high redline to fight the urge to shift too soon. Early on, the six-cylinder's audible scream at 8,000 rpm makes me think I need to make a gear change when there's still 1,000 revs to go. High speed stability is impressive and the optional carbon ceramic brakes haul things down from triple-digit speeds confidently throughout the entire day without issue.

For the next session, I saddle up into a dual-clutch car and let the gearbox do all the shifting. On point transmission programming always keeps the car in the correct gear, letting me focus on shadowing Haywood's line and hitting my marks. I briefly flip to manual mode, which responds immediately to all shift commands, but revert back to auto and fully concentrate on attaching my front bumper to the rear bumper of the lead car.

Getting out of the car after my last session, I'm conflicted about the GT3. A few years ago, I was one of the people mourning the loss of the manual transmission, but now with its return and having driven it back-to-back with a dual-clutch on track, I'm not sure which gearbox I would rather have. Quicker lap times and being able to better keep up with a legendary racer are major pluses for the dual-clutch, but jamming through gears and heel-and-toe downshifting with a manual remains a more involving and rewarding experience.

To make my decision slightly more difficult, both transmissions will carry the same $144,650 base price, which includes $1,050 for destination when the 2018 911 GT3s hit dealerships in fall. In the end, I think I would have a manual car in my garage because of its higher fun factor on the street and during open track days where I'm not trying to follow a pro driver.

Of course, if Hurley Haywood would like to make track days together a more regular thing, maybe my GT3 would have a dual-clutch.

Watch this: It's slower and more difficult, so why do we love a manual Porsche?
04:47 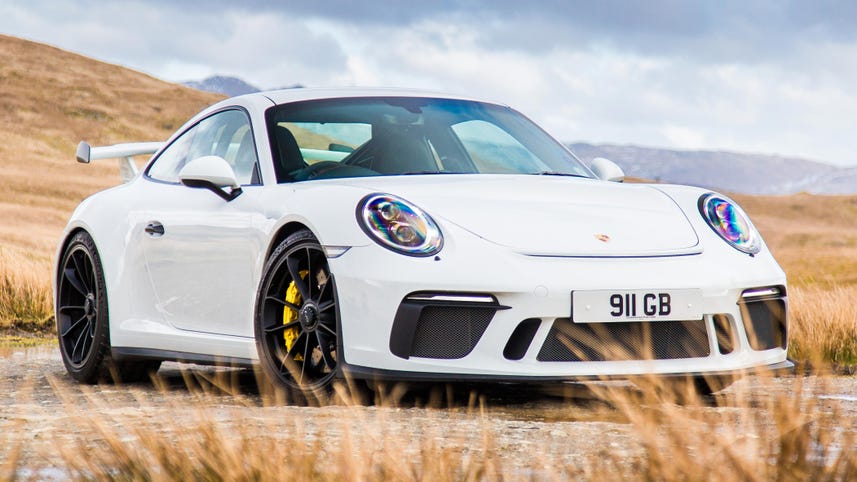 It's slower and more difficult, so why do we love a manual Porsche?
4:47
Watch Now