2018 Jeep Wrangler Unlimited review: Grown up in every way

Yes, it'll still take you out beyond where the pavement ends, but the Wrangler has some newfound maturity for everyday driving.

For a week I was part of an elite club whose members recognize one another with coded signs. When I passed an oncoming Jeep Wrangler on the road, the driver more often than not acknowledged my presence by lifting two fingers off the steering wheel -- the so-called Jeep Wave. It's not because the Wrangler is by any means an uncommon vehicle (Jeep sells more than 20,000 of them per month) that this kinship exists. It's that driving one paints you as somebody who specifically chose a somewhat unconventional vehicle.

While still pretty seriously compromised on pavement, the new Wrangler is nonetheless a huge step forward.

This Jeep Wrangler, the first all-new one in a decade and known by the cognoscenti by its JL chassis code, aims to modernize the Wrangler in a big way. When I first saw the new model in fall 2017, then-Jeep brand head Mike Manley told me it offered "more of everything." That means it's supposed to deliver even greater off-road chops, yes, but crucially more refinement and usability for the people who don't take these things off paved roads. Because as my brief stint in the Jeep Wave club proved, plenty of people use these things as daily drivers rather than rock crawlers.

The 2018 Jeep Wrangler Unlimited is modernized yet still rugged

This all-new Wrangler is still a Wrangler, and there's no clearer evidence of that than the difficulty in distinguishing the new model from the old at a glance. Your biggest clues are the redesigned door handles and the front fenders that now sport running lights. Though there are myriad tweaks, overall this SUV still has the boxy, upright and tough stance of every Wrangler before it. That's no bad thing: the utilitarian style is both functional and a big part of what attracts buyers to this model.

Things look and feel a whole lot fresher inside, especially in this Sahara model, dressed up with a leather-wrapped wheel and stitched dash. The cabin retains its durable and rugged nature, with plenty of exposed screw heads, yet is put together more tightly and finished with fresher materials. Center-console storage is generous, the armrests are better-placed for resting your elbow and all the secondary controls are ideally located for use while driving. Then again, the driving position is still an awkward bolt-upright stance that requires I sit too close to the steering wheel, while the firm, straight-backed seats quickly aggravate my back and the exposed driver's door wiring loom brushes against my left ankle.

In-car tech has also taken a big leap forward. My tester's 7-inch touchscreen infotainment system (5- and 8.4-inch options are also offered) works swiftly and simply, packing standard support for Apple CarPlay and Android Auto. You'll even find USB Type C ports in the cabin for modern smartphones and tablets. The full-color trip computer also does a great job of providing plentiful information front-and-center for the driver. If there's one area in which the tech complement is still lacking, though, it's a somewhat muddy audio quality -- and this despite the optional Alpine system in my tester. 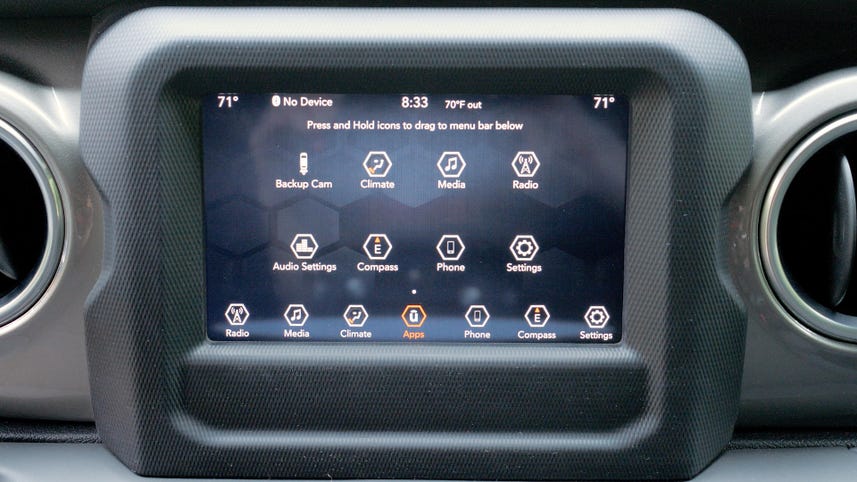 It drives better, but it's still a Jeep

Though a 3.6-liter V6 is standard, this Wrangler is equipped with the new turbocharged 2.0-liter inline-four. Its horsepower figure may be down 15 from the V6, at 270 horsepower, but its 295 pound-foot torque figure is not only beefier (by 35 pound-feet) but also more accessible, arriving at 3,000 rpm instead of 4,800.

That character gives the Wrangler lots of real-world punch and vigor. Full-out acceleration is plenty quick for keeping pace with traffic, and the Wrangler now thrives in the type of in-gear passing maneuvers where the old one might have felt lethargic. It's not an especially great-sounding engine and runs out of steam relatively early at a 5,800-rpm redline, but the torquey nature of this turbo mill is ideal for a vehicle like the Wrangler.

The eight-speed automatic transmission (the six-speed stick is only offered with the V6 engine) is a fine partner. Though occasionally confused in cut-and-thrust traffic, and regularly hunting from eighth to seventh on the highway, it mostly keeps out of the driver's way and shifts smoothly. While you can shift the automatic manually by moving the shift lever, there's no sport mode so keep revs higher. But you wouldn't exactly hustle the Wrangler around bends anyway, so who cares?

Fuel economy with this powertrain is a huge improvement for a Wrangler, with the Unlimited model rated at 22 miles per gallon city and 24 mpg highway -- figures I closely matched in real-world use that are, still, not exactly stellar among all rival SUVs. The lighter, smaller two-door Wrangler returns 23/25 mpg with the turbo engine. Recall that last year the thriftiest Wrangler was EPA-rated at just 17/21 mpg and it's clear what an improvement the new model is.

The Wrangler's ride-and-handling mix is a bit more of a mixed bag. Ultimately, this is the most civilized Wrangler I've ever piloted on-road, with a better ride, a quieter cabin and more modern driving dynamics than any before. No longer does this SUV feel like it's meant to traverse the Rubicon and nowhere else. But that doesn't mean it's as chilled-out in the city as your Honda Pilot.

The steering wheel delivers its instructions to the front tires with no slop or vagueness, yet that steering does tend to wander at speed. I find myself correcting the Wrangler's line back and forth more than expected on the highway as the solid axle and high-sidewall tires (255/70R18) float around on the road. And while the new suspension capably soaks up road imperfections before they reach the seat, severe bumps (think highway expansion joints) still send a jolt through the cabin. It takes me a few miles to acclimate to the extremely soft brake pedal and there's lots of dive when you do brake, but on the whole, the car drives well.

The biggest letdown, though, is the noise on the highway. While certainly more subdued than prior Wranglers, the power soft-top flutters a little at speed and does little to keep wind roar at bay. While it's possible the optional hardtop is quieter -- and it's possible that Jeep buyers are willing to accept a noisier highway ride -- this is not a vehicle in which I'd want to spend a day-long journey at 70 miles per  hour. Things are quite good around town, though, where that punchy engine make for easy commuting and noisiness is generally low.

Don't get me wrong, though: this Wrangler is much improved in the way it drives on pavement. You're just constantly reminded that it's a genuine SUV rather than one of today's softer, more road-focused crossovers.

Some of the new Wrangler's most welcome upgrades are intended to help you avoid hitting other stuff. Visibility is vastly better, thanks to enlarged window glass in every direction, though the windshield and mirrors are still quite short. The rear wiper now hides behind the spare tire rather than blocking your view out the back window, and you can even fold down the rear-seat headrests when no one's sitting there. A backup camera is standard -- the first time a Wrangler has ever offered one, and mainly because it's now required by law -- and you can option rear parking sensors and blind-spot monitoring. While I've never crunched metal in a Wrangler before, all these upgrades are still welcome on such a large vehicle.

The turning circle is even a bit smaller this year, a boon for parking or driving in the city, though not so small that you won't still be forced to do a three-point maneuver to get your big Jeep out of a crowded Trader Joe's parking lot.

Of course, don't forget that this thing can go places most SUVs wouldn't dare. Even this Sahara model has 10 inches of ground clearance, a real four-wheel-drive low-range, generous approach and departure angles and the ability to ford 30 inches of water. For serious terrain, you'll want the Rubicon, but the Sahara is no shrinking violet when it comes to exploring the great outdoors.

First things first: Jeep Wrangler prices continue to rise every year to pretty serious numbers. The base two-door Sport model costs $29,440 with destination -- and it comes with manual locks and crank windows. And my tester's $49,170 sticker price could buy you a nicely equipped German luxury SUV. You can argue that the newest Wrangler offers a lot of tech and features, but its pricing scheme feels like a whole lot of coin for a vehicle you can disassemble so easily.

My Jeep Wrangler would in some ways be similar to this one: an Unlimited Sahara, albeit painted in Firecracker Red and equipped with the $1,095 three-piece removable hardtop. I'd stick with the 3.6-liter V6 engine, add the $595 Cold Weather package (heated seats and steering wheel), the $895 LED headlights and the $895 blind-spot monitoring pack, then pretty much call it good. Such a vehicle would cost $40,780.

Still an outlier, but still a gem

I'd be remiss if I didn't note, however, my disappointment in how little the Wrangler seems to have advanced in some ways; it still feels behind the times. A few examples: There are no curtain airbags, just two front and two side ones. There's no dome light above the front seats, so the cabin is gloomy when you get in and out at night. The hood still doesn't lock because the two external catches are a key styling cue that designers wanted to keep, and nor does the fuel cap. And in spite of its tough body-on-frame construction, the Wrangler can't even tow as much as can a Chrysler Pacifica minivan.

Does that matter? The thing to remember is that because the Wrangler is so damned capable off-road, buyers are willing to make big compromises when driving it on the road. The possibility of adventure is part of the appeal: not that you would trek over hill and dale, but you could if you wanted. Perhaps buying this Jeep as a daily driver is no more irrational than the person who buys a 190-mph sports car and never hits a race track. That car, too, is compromised in its daily-driver operation but compensates by offering the promise that, if called upon, it could do incredible things.

The bottom line is that the Jeep Wrangler is a singular vehicle with an appeal all its own, and the 2018 model is better in every way. For the legions of owners who want a Jeep but never intend to go beyond the suburbs, the new Wrangler makes life better and easier in every way. For that reason, there's no doubt it's a winner. And if you do intend to hit rocky, remote trails, well, the JL Wrangler is even better at that, too.