2018 Jeep Wrangler: The most capable off-road SUV just got even better

The Wrangler crawls to the top with more powertrain options, improved efficiency and better off-road prowess.

I just finished crawling up a steep rock hill in the 2018 Jeep Wrangler Rubicon during a Jeep-sponsored press event, and the spotter asked me to take a hard left, essentially planting the driver's side BF Goodrich KO2 tire directly on a near vertical rock. I expected to hear a scrape from the front bumper as I approached the rock, but this, my friends, is the new Rubicon. With an improved approach angle of 44 degrees, the Rubicon pushed itself up and over the rock with nary a scratch on the skid plate or a dent in the bumper.

Full disclosure: I've always been a Jeep gal. My childhood memories are full of off-road trips in the family 1966 CJ5. But recently I spent a lot of time in the Chevrolet Colorado ZR2, and came to love the superior payload and towing capacity of a truck combined with the front and rear lockers. As soon as I sat behind the wheel of the new Jeep, all that nostalgia came flooding back, and all thoughts of practicality went out the window.

Watch this: 2018 Jeep Wrangler makes anyone a rock crawling star
06:17 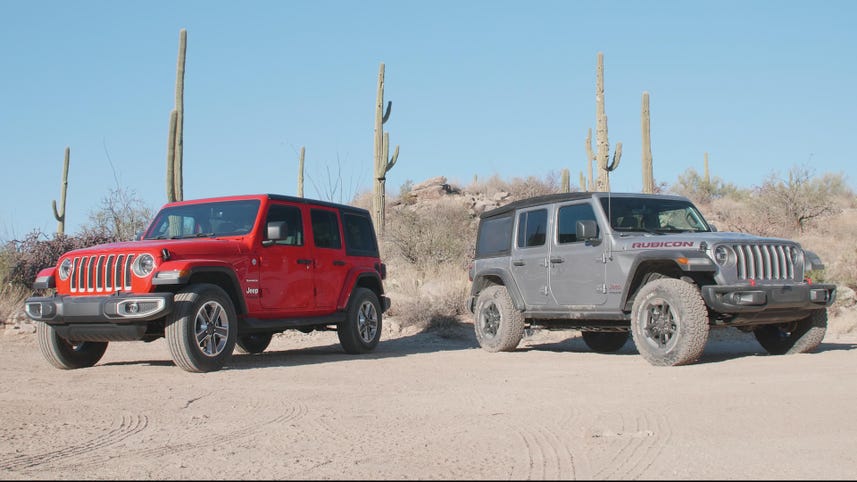 The Jeep Wrangler arguably has the best off-road capability of all SUVs currently on the market. The Wrangler 2-door model is available in Sport, Sport S and Rubicon trims. If you want a bit more room, Wrangler 4-door models are available in Sport, Sport S, Sahara and Rubicon trims. Four-wheel drive with a low range comes standard on all models, but the Rubicon goes a few steps further with locking front and rear differentials, disconnecting sway bars and other off-road goodies.

The proven 3.6-liter V6 engine is standard, although it now comes with idle stop technology for improved fuel economy. Last year's numbers of 16 miles per gallon in the city and 21 on the highway are up to 18 and 23 with the new eight-speed automatic and 17 and 23 in the new six-speed manual.

New this year is a 2.0-liter turbocharged four-cylinder engine, good for 270 horsepower and 295 pound-feet of torque, mated to the new eight-speed automatic transmission. This engine features a new eTorque mild-hybrid technology with idle stop, fuel shut-off and regenerative braking. No word on EPA fuel ratings, but Jeep certainly seems to be paying attention to efficiency this time around.

Folks willing to wait until 2019 will be rewarded with a 3.0-liter V6 EcoDiesel, mated to the eight-speed automatic transmission. This is the powerplant I am most excited about thanks to the 260 horsepower and 442 pound/feet of torque. Jeeps are made for slow and steady rock climbing, not fast dune running like the Ford Raptor; it does just fine with horsepower in the mid-200s. The extra torque, however, is a boon and should help the Wrangler climb up and over obstacles even easier.

And if none of these options get your gears greased, try waiting for 2020 when Jeep will throw a plug-in hybrid under the hood. Yup, four-wheeling on electric power.

On the pavement drive to Jeep's off-road test section, I got to sample a four-door Sahara with the optional Selec-Trac full-time two speed transfer case. This new option provides what Jeep calls full-time four wheel drive, but its really more of a rear-biased all-wheel drive system, where power is diverted to the front wheels only when needed. The Selec-Trac system also features Jeep's traditional part-time four wheel drive as well as a low-range.

My pavement tester was also equipped with the new 2.0-liter turbo powerplant. I'll admit to being skeptical, but the little engine was more than sufficient. Thanks to the twin-scroll turbocharger, there isn't any noticeable lag, and the new eight-speed automatic transmission is unobtrusive in its shifts. Jeep mounted the turbocharger directly on the cylinder head for greater durability, and its electronically actuated waste gate should perform well even when one is rock crawling or in a precarious situation. Furthermore, a separate liquid-cooling system for air, throttle body and turbo should allow drivers to turn up the heat on their driving line choices while keeping their power points nice and cool. I really hope to spend more time with the turbocharged engine at a later date to get into some dirt and dunes.

Driving a Jeep on the pavement is, well, like driving a Jeep on the pavement. The solid front and rear axles mean it's not going to win any comfort contests, and despite the improved aerodynamics offered from the raked windshield and seven-slot grill, it's still pretty easy to catch a crosswind. That said, Jeep added vents behind the front fenders so the hood flutter from yesteryear is gone and wind noise, at least in the hard top, has been improved.

What hasn't been improved is payload capacity. You can still only haul a maximum of 1,000 pounds and tow a maximum of 3,500. It's enough to tow a small camping trailer or an open trailer loaded with a lightweight car, but those who have big guy and gal toys are better off with a truck.

When we finally reached the rough stuff, Jeep had me switch out the Sahara model for the grand daddy Rubicon. The Rock-Trac four-wheel drive system in the Rubicon comes with the whole shebang: Locking front and rear differentials, front sway bar disconnect and a killer 4:1 low-range gear ratio. Through the magic of math and engineering, once the torque gets multiplied through the transmission, the transfer case and the axle, the final crawl ratio is 77.2:1 for the automatic transmission and 84.2:1 for the manual, a huge improvement over the last generation.

Okay, so what do those numbers mean? The bigger the crawl ratio, the more torque gets put to the ground, the easier the Jeep will climb up and over obstacles in a slow and controlled manner. I found this out as I manoeuvred the Wrangler over rocks that would make my beloved ZR2 weep with envy. Following the directions of my outside spotter, I turned my wheels hither and yon and applied just a touch of the gas. With the front and rear locked, each wheel got an equal amount of torque. Further, with the front sway bar disconnected the wheels had even more articulation. The KO2 tires fought just a bit for purchase on the slick rocks, but before I knew it, the Wrangler had popped itself to the top of the rock pile and I hadn't even broken a sweat. Okay, maybe a small sweat was broken, but very small.

For every obstacle I attempted in the Wrangler, it was the same: Shift to 4-low, lock the front and rear, and keep the right foot light and steady. Sure, sometimes I hit the rock rails, even with the improved ground clearance of 10.8 inches, and the skid plate saw a bit of use, but that's what those things are for. Overall, the new Wrangler makes off-roading easy for newbies and puts even more difficult trails in the sights of those with experience.

Wranglers have never been known for their interior technology, but the 2018 model is shaping up to be pretty nifty. FCA's excellent Uconnect system comes standard, displayed on either a 5-, 7- or 8.4-inch touchscreen with pinch and zoom capability. Apple CarPlay and Android Auto are both included, along with a WiFi hotspot, two USB ports, two 12V accessory ports and a 115-volt three-prong AC outlet, all the better for blending up some beverages at the end of the trail.

Off-roading has never looked better in the 2018 Jeep Wrangler

And for those who fear a misguided return to the square-headlight days of yore, never fear. The 2018 Wrangler still sports the familiar round headlights and seven-slot grille. The windshield folds down and the doors come off, but the side mirrors are mounted on the doors. Once they're gone, so too are your mirrors. The most distinctive change to the front fascia is the relocation of the LED turn signals to the front of the fenders, rather than just below the headlights. It's a bold move and certainly emphasizes the Wrangler's width.

The Wrangler finally joined the 21st century with the addition of a back-up camera. I wouldn't hold my breath for adaptive cruise control or lane keeping assist, but the availability of blind-spot monitoring and rear cross-path detection is welcome.

Available next summer will be the Sky One-Touch powertop, taking some of the burden of letting the sunshine in. The current top is, well honestly, a bear to take down. The addition of a push-button open canvas roof should be a welcome option.

No word on pricing yet for the 2.0-liter turbo models, but expect to see them hitting dealerships in summer of 2018.