Admit it: You think this wagon's sexy. Indeed, Jaguar's new Sportbrake is quite a looker -- one of the most attractive wagons available anywhere. But while it's easy to get lost in lust with that sleek longroof shape, don't forget, a wagon is only as good as the sedan on which it's based.

Beautiful to behold, enjoyable to drive and super functional to boot. The XF Sportbrake has utility and performance in spades.

Sub-par interior trimmings and onboard tech lag behind the competition.

Added functionality and excellent performance make up for some of the XF’s inherent shortcomings.

In this case, that's the Jaguar XF. Now in its second generation, the XF is a great-driving luxury sedan that's still quite beautiful in its own right. Its interior materials and onboard tech leave a lot to be desired, but thankfully, the Sportbrake's added functionality and bonus cool points make up for some of those shortcomings.

2018 Jaguar XF Sportbrake: Baby got back

While the XF sedan is available in more sedate Premium, Prestige and R-Sport body styles, the Sportbrake is exclusively offered as in range-topping S guise. Every XF Sportbrake essentially looks like a version of the one you see here, including the S-spec front fascia, LED headlights, side sill extensions and dual exhaust outlets at the rear. The First Edition trim comes with a model-specific set of 19-inch wheels, while every other Sportbrake rolls on 20-inch wheels, available in three styles.

The long, low wagon shape really works on the XF. I love the strong rake of the rear glass and the elegant shape of the taillights. The XF Sportbrake comes standard with a panoramic glass roof, though be warned, it's not a sunroof. Rather, it's a single fixed glass panel that doesn't tilt or open, and no conventional sunroof option is available.

The Sportbrake shape adds a wealth of cargo-carrying capability to the midsize XF; fold the rear seats and there's as much as 69.7 cubic feet of space. That not only makes the Sportbrake more capacious than its Mercedes-Benz E400 and Volvo V90 wagon rivals, that total actually bests the 63.5 cubic feet offered by Jaguar's F-Pace SUV. Combine that with the XF Sportbrake's low load-in height, power liftgate and standard auto-leveling rear air suspension, and it's the Jaguar that's best-suited for schlepping your largest loads.

Since it's only offered in S guise at this time, every US-spec XF Sportbrake uses the same engine: Jaguar's 3.0-liter supercharged V6. It's a strong motor, with 380 horsepower and 332 pound-feet of torque on offer, paired with an 8-speed automatic transmission that sends power to all four wheels. Jaguar says it takes 5.3 seconds to hit 60 miles per hour in the 4,045-pound Sportbrake, which is only 0.2 seconds slower than an equivalent XF S sedan, despite a 275-pound weight penalty.

The supercharged engine takes a moment to really come to life off the line, but once you're humming in the heart of the power band, I found ample power for spirited drives along winding California canyon roads. The transmission executes buttery smooth shifts when left to its own devices, and in sport mode, it keeps you planted in the sweet spot of the engine's rev range. There are steering wheel-mounted paddle shifters, but honestly, don't bother. They don't feel particularly great against one's fingers, with a chintzy click accompanying their action, and shift response time isn't as quick as it ought to be. I prefer to let the ZF-sourced gearbox do its own thing. At no point during my time with the XF was I upset with the transmission's default shift logic.

There's great weight to the Sportbrake's steering, with plenty of feedback delivered through the wheel. A taut chassis keeps the XF composed during turns, with only minor amounts of body roll accompanying quick changes of direction. There's no tradeoff in overall ride comfort during highway cruising, either -- as planted as the Sportbrake is up on those twisty canyon roads, it delivers a smooth, compliant ride, even over pockmarked stretches of pavement.

The S model's great performance does come at the expense of fuel economy, however. The XF Sportbrake carries EPA-estimated mileage ratings of 18 mpg city, 25 mpg highway and 21 mpg combined, which are reductions of 2, 3 and 2 mpg, respectively, over the XF S sedan. During my week of not-slow driving, I only average about 20.5 mpg, which seems pretty poor.

Where the XF Sportbrake really lets me down is inside. While it checks all the boxes of a luxury car, no part of this Jaguar's interior feels decidedly premium. Hard plastics and uninviting leather seats make up the majority of the interior, and all of the switchgear feels cheap. I appreciate the simple arrangement of the audio and climate controls, as well the uncluttered look of the center console. But shod in hues of black and gray, there's nothing particularly inviting about the XF's cabin. The electrically opening air vents and elevating gear selector are just gimmicky at this point and only make me ask, "How much will this cost when it inevitably breaks?" Another nod to build quality, I will say that my test car, with only a few thousand miles on its odometer, issued far more creaks and rattles than any vehicle should, especially at this price point. Why is sister brand Land Rover getting all of the best cabins?

The InControl Touch Pro system offers a robust suite of infotainment features, housed in a 10-inch touchscreen with bright colors and crisp fonts. There's a great level of customization available here, too -- more than 60 different widgets and shortcuts are available for the system's home screen. A digital instrument panel offers a similar level of high-quality graphics and driver customization. 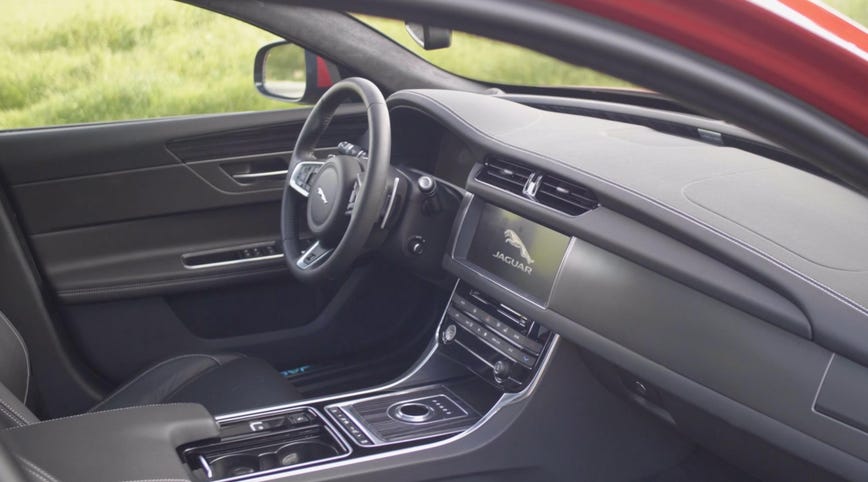 Checking the tech in the 2018 Jaguar XF Sportbrake
3:43
Watch Now

Unfortunately, the confusing menu and submenu structure makes InControl a chore to navigate quickly, as does the system's laggy response to inputs. You're better off using voice commands, which seem to work well enough. Apple CarPlay and Android Auto are absent, which I still maintain is inexcusable for a premium car in the year 2018, although the XF Sportbrake does offer an optional Wi-Fi hotspot.

Speaking of onboard tech, while the XF Sportbrake comes with a number of driver assistance features, they're only available with the Driver Assistance Package. If you want adaptive cruise control, blind spot assist, parking assist, park distance control, a 360-degree camera and traffic sign recognition, be prepared to shell out $3,495 for the whole bundle.

Since it's only available in top-level S spec, you can't get into a Sportbrake for less than $70,450, which is $3,585 more than an equivalent XF S sedan. The XF S Sportbrake First Edition, which only comes with one color/wheel combination, starts at $72,100.

For starters, I'd pick Caesium Blue paint ($565) and the gloss black 20-inch wheels ($1,020), and inside, I'd spec the black/red interior combo and carbon fiber trim ($810). Then I'd add the Comfort & Convenience Package ($1,805) mostly for the heated and cooled seats, the aforementioned $3,495 Driver Assistance Package, the $3,265 Technology Package for its Wi-Fi hotspot, navigation, Meridian surround system and digital instrument cluster. That means I'm looking at an $82,405 XF Sportbrake, including $995 for destination.

If you've got deep(er) pockets, you can also add the $360 Black Package (gloss black exterior trim), $2,860 Luxury Interior Upgrade Package (mood lighting, four-zone climate control, premium carpet floor mats, rear sunshades and more) and a host of other one-off options. Check every box and the XF Sportbrake tops out at $87,845. And don't forget about the $410 Activity Key.

The XF Sportbrake is a compelling option in the Jaguar range. It's the company's most functional model, and none of the XF's great road manners are lost with the addition of that useful, stylish rump. But as a premium wagon, I feel the Mercedes-Benz E400 and Volvo V90 are more well-rounded alternatives. Yes, the Jaguar is more powerful and better to drive, but these competitors offer far more luxurious accommodations and a richer set of features and tech. On top of that, the Volvo costs a full $20,000 less, to start.

But again, a wagon is only as good as the sedan counterpart underneath, and just as I wouldn't buy an XF over a Mercedes E-Class or Volvo S90, the same remains true in wonderful wagon guise. The Sportbrake may be the best XF you can buy today, but the inherent flaws are still there.