2018 Honda Accord Hybrid review: The efficient sedan that does it all, and well

A hybrid powertrain does little to change the fact that the 10th-generation Accord is a near-faultless midsize pick.

Gas prices may still be relatively low and standard cars' fuel efficiency keeps increasing, but that doesn't mean there's no reason to consider a hybrid. A hybrid powertrain's energy recuperation can add up to lots of savings at the pump, especially for drivers who do a lot of stop-and-go driving.

Turning the Accord into a hybrid yields even greater efficiency with essentially no sacrifices.

With the 2018 Honda Accord Hybrid, you don't even need to make any major sacrifices to live with a hybrid. We love the regular Accord midsize sedan, and all of its virtues -- a roomy interior, an excellent feature set and class-leading road manners -- carry over to the hybrid version. It's an outstanding daily driver that also happens to post fantastic fuel economy figures.

The 2018 Honda Accord Hybrid makes getting great fuel economy easy

The heart of the Accord Hybrid is Honda's two-motor powertrain that combines a 2.0-liter gas engine, two electric motors and a lithium-ion battery pack. The gas engine is rated for 143 horsepower and 129 pound-feet of torque. The drive motor offers up 181 horsepower and 232 pound-feet, and the total system output is pegged at 212 horsepower.

Most of the time, the gas engine isn't connected to the front wheels at all, instead spinning a motor-generator that then sends electrical power to the traction motor. At other times, the car drives on electric motivation alone. In some situations on the highway, though, a lockup clutch allows the 2.0-liter to drive the front axle directly. What that means is that the Accord Hybrid drives and accelerates with the supple smoothness of an electric car: No lag, no hesitation, no lurching. It's pretty much silent when driving in all-electric mode, and still calm and civilized when the gas engine kicks in to offer some assistance.

An Econ switch slackens throttle response, an EV mode button forces engine-off operation (at low speeds, assuming the battery is charged enough) and a Sport mode keeps the engine on for maximum responsiveness. The powertrain's operation is so well-tuned for all types of driving, though, that you're best off just leaving it to its own devices and ignoring the drive modes.

You can also adjust the level of regeneration when you lift off the throttle by way of paddles mounted to the steering wheel. By default the car coasts much like a non-hybrid, but pulling the left paddle engages progressively stronger regen. If it suits your driving style, that could improve your efficiency.

The lone letdown is that the engine makes the same sort of moaning noises when pressed. It reminded me of cars that have a continuously variable transmission. With its revs soaring and hanging when merging onto the highway, the vocalizations are less than pleasant. Fortunately the engine's output is muted overall, and it's only under hard acceleration that you'll really notice the strained sounds.

It's not hard to remember the Honda Accord Hybrid's fuel economy rating: Every trim level is rated for 47 miles per gallon city, 47 mpg highway and 47 mpg combined. The thriftiest non-hybrid Accords, with a 1.5-liter turbo engine and CVT, return 30/38/33 mpg, so there are genuine fuel savings to be had by going hybrid. As ever, your mileage may vary. Driving the way I usually drive to the places I usually go, with a mix of highway and suburban mileage, I managed just 39 mpg. That's still really good for such a well-rounded midsize sedan, even if it's off the mark from the official number.

Those are also seriously competitive numbers in the class. The Toyota Camry Hybrid initially appears to trounce the Accord in EPA tests, with ratings of 51 mpg city and 53 mpg highway. But it's worth noting that's only for the LE trim level, and the heavier, better-equipped Camry Hybrid XLE/SE deliver 44/47 mpg. The Accord does handily beat the economy of other midsize hybrid sedans: The Ford Fusion (43/41 mpg), Hyundai Sonata (40/46 mpg), Kia Optima (39/46), Chevrolet Malibu (49/43 mpg).

Because the Accord Hybrid's lithium-ion battery pack now lives below the rear seats, trunk space is exactly the same as in the non-hybrid. That means a healthy 16.7 cubic feet of room, easily expandable by lowering the standard 60/40 split rear seats. By contrast, the 2017 Accord Hybrid had just 13.5 cubes of luggage space because its battery intruded into the trunk. Head- and legroom are in abundance for both rows of seats, too.

The rest of the car and driving experience is also good because, well, it's just like other 2018 Accords. The Hybrid drives with ease and maturity. Its cabin is remarkably quiet even at speed, while its ride quality helps me forget the crumbling state of my local roads. Visibility is typically Honda-like, meaning unobstructed in every direction.

Even the steering and brake-pedal feel are beyond reproach. The latter, typically a bugbear of hybrids for the inconsistent feel between regenerative and friction braking, has zero learning curve and allows for chauffeur-smooth stopping from your first mile at the helm. If the handling mix isn't exactly exciting -- blame, in part, the low-rolling-resistance Michelin Energy Saver A/S rubber -- at least it is never vague, wallowing or unpredictable. This is, in short, a car that just does what you tell it to. 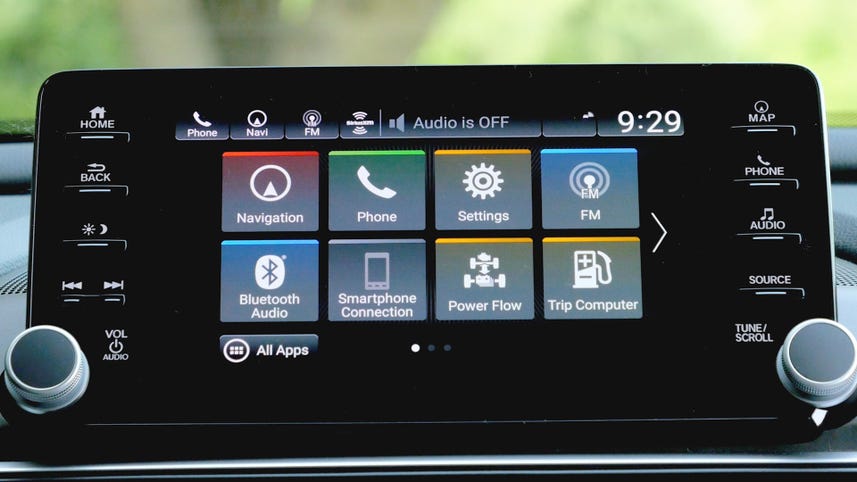 Checking the tech in the 2018 Honda Accord Hybrid
2:00
Watch Now

All the technology you could want

The newest HondaLink infotainment system, on an 8-inch touchscreen supplemented by physical volume, tuning and shortcut buttons, is one of our favorite systems on sale today. (A less-impressive 7-inch screen is standard on the base model.) Its responses are swift and its graphics crisp. The straightforward home menu has bold tiles, while a row of shortcuts at the top of the screen allows for things such as changing audio sources or swapping to the phone menu easily. Apple CarPlay and Android Auto are both supported, and integrated navigation is offered as an option.

A semi-digital instrument cluster allows for showing everything from navigation instructions to fuel efficiency in the left-hand side of the gauges. My Touring tester also features a Wi-Fi hotspot, wireless phone charging and a bright, color head-up display. Another unusual feature is NFC phone pairing. It's signalled by a small logo on the passenger side of the center stack. Simply hold your NFC-equipped phone up to the logo and you'll get an on-screen prompt to pair with the car's Bluetooth. Cool, yes, but it doesn't save that much time over pairing through the touchscreen -- and let's be honest, how often are you really pairing a new phone to your car?

Honda has done an excellent job of democratizing safety equipment across its model line, and the Accord Hybrid is no exception. Every version features Honda Sensing as standard. That's the suite that includes pre-collision warning and braking, lane-departure warning, road-departure mitigation, lane-keep assist, adaptive cruise control, traffic sign recognition and automatic high beams. All but the base Hybrid trim also has blind-spot monitoring. The assist systems all work flawlessly and can easily be enabled or disabled through the instrument cluster menus or steering wheel buttons. Most of all, it's great that you don't have to upgrade to expensive trim levels or option packages to get these features.

As lovely as the loaded-up Touring model is, one of the great things about the Accord Hybrid is that most of the must-have features -- active-safety tech, stellar infotainment system -- are available on more affordable trim levels. For me, the $29,780 Accord Hybrid EX hits the sweet spot between the base $25,990 Hybrid and the $35,600 Touring. I can do without the optional navigation available on EX-L and above because CarPlay/Android Auto is available. While the Touring' chrome door handles, head-up display, wireless phone charging and cooled front seats are nice-to-haves, I wouldn't necessarily upgrade to that pricey trim level.

No matter which Hybrid you get, the price premium over an equivalent standard Accord is more than reasonable: $1,525 for the base Hybrid versus an Accord LX, $1,145 for the EX, $1,465 for the EX-L and EX-L with Navigation and just $905 for the Touring. That means the breakeven point at which your gas savings will outweigh the extra cost of buying the hybrid shouldn't take too long to reach for most drivers.

That only underlines the fact that the Honda Accord Hybrid is an excellent midsize sedan with very few sacrifices. Just like the standard model, this is one the most satisfying mainstream sedans you can buy because it is easy to use, unerringly pleasant to drive and an impressive value.