After years of being forbidden fruit, Audi's RS3 has finally made its way to the US. However, rather than the hot little hatch that we've been lusting after from afar, our RS3 is an angry-but-cute, high-powered sedan. Beggars can't be choosers, I suppose.

There's a bit of turbo lag when launching. Paying this much for a subcompact is hard bullet to bite.

It's a pricey proposition, but the 2018 Audi RS3 sedan's balance of race-ready performance, daily-drivable comfort and best-in-class tech is hard to match.

Having lived with the 2018 RS3 sedan for a while now, I've started to care less and less about the silhouette. The excellent performance it offers is just that good. Plus, the aggressive little subcompact is packing some of the best cabin tech in the business.

Beneath all of the go-faster bits and styling upgrades, the RS3 is just an A3 (duh), so it still offers all of the awesome tech that we've come to love from Audi.

That includes a version of the automaker's Multi Media Interface (MMI Touch) with 4G LTE connectivity, Nvidia-powered graphics and Google Earth satellite imagery. In the RS3, you'll find the familiar touch-sensitive, knob-based physical controller on the center console, controlling a seven-inch central screen. I like that this motorized screen can be hidden away when the car is parked or when driving demands my full attention. 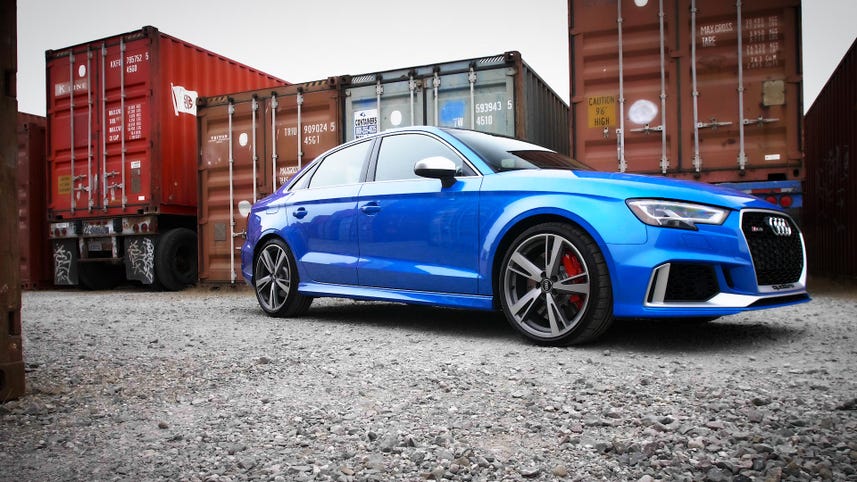 MMI is one of my favorite infotainment suites when applied upmarket in larger cars like the Audi's A5 and A7, so I feel confident in calling it one of the best in this much smaller, less expensive subcompact segment. However, if you're not in love with it, Apple CarPlay and Android Auto are standard -- though interacting with those interfaces without a touchscreen takes a bit of getting used to.

Onboard navigation with traffic data -- part of a $3,200 Technology package -- features really smart voice control and 4G LTE-powered online point-of-interest search is quite good. The Google Earth integration adds a nice bling factor, but I personally preferred the legibility and simplicity of the maps with the satellite imagery overlay.

My model wasn't equipped with the optional $1,400 Driver Assistance Package that would bring adaptive cruise control with stop-and-go, lane keeping steering assist and automatic high beams. I didn't really miss these features, but considering the RS3 will likely be a daily driver, this is a package worth considering.

One of the highlights of Audi's tech is the amazing 12-inch Virtual Cockpit digital instrument cluster, which makes an appearance in the RS3's physical cockpit as part of the aforementioned Technology pack.

Virtual Cockpit allows the driver to display and have limited control over most of the most commonly accessed infotainment features within the instrument cluster using steering wheel controls. The display can be customized to display a trip computer, a live map, the current audio source and more.

The RS3 also features specific performance screens that are only available on RS models including a lap timer, g-force meter, horsepower and torque readouts and more. There's also a special "Sport" display mode that reconfigures the Virtual Cockpit to show only performance information with a large central tachometer.

I particularly like that in the RS3, Virtual Cockpit means that I can retain access all of the most common infotainment features without removing a hand from the wheel -- heck, I can even drive with the main MMI display hidden away.

OK, now for the fun stuff. The RS3 is powered by Audi's 2.5-liter turbocharged five-cylinder engine. Audi's five-banger has a pretty distinct sound that's enhanced by the RS' sport exhaust, not to mention the seriously healthy grunt of 400 horsepower and 354 pound-feet of torque.

Launching the RS3, I was surprised to notice a bit of turbo-lag off the line -- odd given how well Audi's four-cylinder engines have eliminated this delay. However, the lag is gone after just a moment, replaced by a satisfying surge of power and acceleration. I should note that I only noticed the lag on launch; once the turbo is spooled up, it stays alive as you up- and downshift.

Speaking of shifts, I really wish the RS3 came with a manual gearbox, though its seven-speed dual-clutch "S-tronic" automatic changes gears quicker than I could ever hope to. The transmission is mated to a "reinforced" version of Audi's sport Quattro all-wheel-drive system for better torque management.

After engaging launch control, the RS3 is good for a 0-60 mile-per-hour sprint in just 3.9 seconds and sounds amazing doing so. With all four wheels clawing at the pavement, there's almost no tire squeal on launch, so you have just the burble of the exhaust and the g-forces to keep you company.

Once you get going, the Quattro system defaults to a more rear-biased torque split program for more dynamic power delivery when cornering. Torque vectoring on the rear axle varies power delivery laterally mid-turn to further raise your corner exit speed.

Keeping the 19-inch wheels and tires gripping the tarmac is a standard magnetic ride suspension. This constantly adapts damping force while offering a good balance of ride comfort and responsiveness.

My example is equipped with the $1,450 Dynamic package that adds unique wheels and staggered tires (slightly wider at the front than at the rear, you don't see that everyday), red brake calipers and that Sport exhaust system that I can't stop bringing up. Even with the rear-biased Quattro power delivery, I was pleased at how neutral the RS3 felt around a corner. There was a good sense of rotation and a great feeling of feedback and control, but even when testing the grip of the seat bolsters with the corner speed, the RS3 always felt sublimely stable, never squirrelly.

Relative to its greatest rival, BMW's M2, the Audi tends to feel a bit more relaxed and comfortable. I wouldn't mind driving this car to work every day. However, the ride is definitely firmer than its less-power S3 equivalent, or a Volkswagen Golf R.

I think that's a nice middle ground, especially for a top-trim high-performance version of an entry-level luxury car. Realistically, this will be someone's only car, so it's important that it's engaging, but not punishing on a daily basis over potholes, poorly maintained highways and the like. I think Audi nails it here.

If, however, you spend more time on the track than I do, then perhaps the optional fixed sport suspension -- part of a $4,800 Dynamic Plus package that also adds ceramic brakes and an elevated 174 mph speed limiter -- is worth considering. 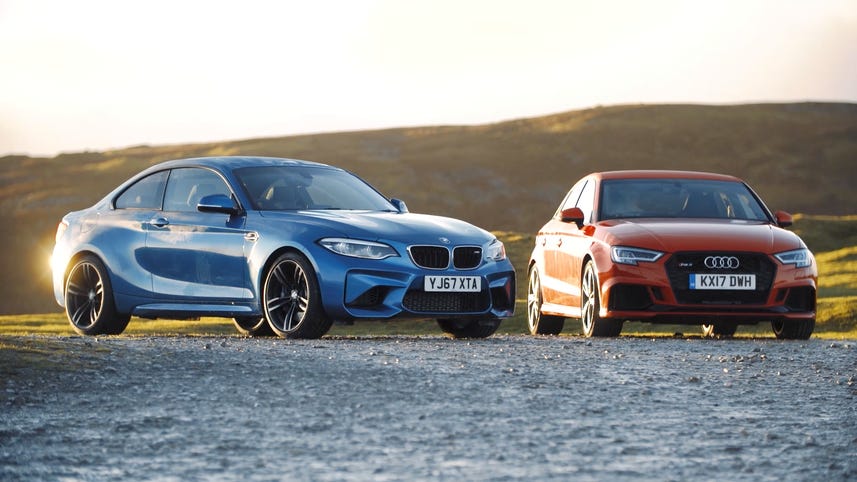 The 2018 Audi RS3 feels at home on the thrilling mountain roads near Roadshow's San Francisco HQ while remaining surprisingly comfortable while commuting. I wouldn't mind daily driving this bad boy at all. However, given the way it delivers power and tackles corners, owners who don't at least occasionally hit the race track or autocross Audi's little mighty mouse are probably not making the most of this significant price tag.

The 2018 Audi RS3 starts at $55,875 including a $975 destination charge. For reference, that's twice as much as the base A3 and $15k more than a Golf R or Civic Type R. As tested -- with premium paint, Technology and Dynamic packages -- my car's price stretches to $62,475. The only option missing that I'd consider is the $1,400 Driver Assistance package, which makes daily driving safer and more convenient.

As I mentioned, the RS3 compares nicely with BMW's M2. The Audi is a bit more conservative, but I think also just a bit easier to live with as a daily driver. The BMW, which has a manual transmission and proper rear-wheel drive, is probably the better track tool. Less than $500 separates the two when comparably equipped. Personally and subjectively, I give the edge to the Audi based on my driving style and habits, but you can't really go wrong either way. Just buy both.