The Zero SR has more torque than you could ever need and handling that'll put a smile on your face, but short range may leave you frowning.

When evaluating the purchase of an electric vehicle, three factors tend to take priority above all others: price, range and performance. Traditionally, EVs have cost too much, not gone far enough and been saddled with uninspiring performance to boot. Thankfully, that's changing, with cars like the Tesla Model 3 and Chevrolet Bolt EV quickly putting those fears to rest.

What was true for cars was also true for the first generation of electric motorcycles to hit the market -- insipid bikes that might get you to work on time, but only if the route into the office was mostly downhill. But that, too, is changing thanks to rides like this, the Zero SR from Zero Motorcycles. Its price is in line with modern superbikes, it promises up to 202 miles on a charge, and it has way more grunt than your average big superbike.

Is this the perfect two-wheeled EV, then? Not quite.

Road-oriented motorcycles can be broadly split into two basic categories: cruisers and sportbikes. The primary deciding factor is where your feet are. Are your boots up front, hanging out in the wind? You're on a cruiser. Are they tucked up beneath you? Then you're probably on something most people would consider a sportbike. (In equestrian terms, it's similar to the difference between a Western and an English saddle.)

The Zero SR, despite the racy-sounding "R" in the title, actually sits somewhere in between the two. The look is definitely sporty, but the riding position is upright, with a wide, comfortable seat and pegs that move your feet forward.

The look is definitely sporty, but the riding position is upright, with a wide, comfortable seat and pegs that move your feet forward.
Watch this: Zero SR electric motorcycle offers more comfort than your average bike
03:16 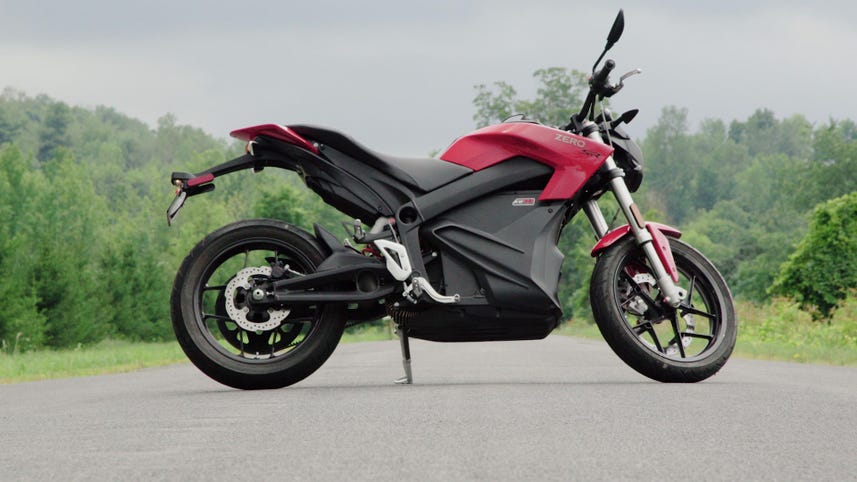 It splits the difference in other areas, too. It certainly accelerates like a sportbike, a middling 70-horsepower figure quickly overshadowed by 116 pound-feet of torque -- more than all but the biggest of superbikes. Its curb weight of 414 pounds is also on par with big sportbikes, but the no-name, single-sided front brake disc points to more humble performance.

The Showa suspension is fully adjustable, but out of the box it's definitely tuned for comfort, while the Pirelli Diablo Rosso tires are a solid choice for spirited riding.

Having ridden previous Zeros as well as a number of electric bikes but not the SR, I was really looking forward to my first time twisting the grip here. So I got geared up, coasted down my driveway, pointed the nose of the bike towards the open road, and was immediately, utterly heartbroken. I leaned forward with the expectation of a massive surge of torque, and very nearly found myself falling over the handlebars. The acceleration was more Prius than Porsche.

Thankfully, I quickly realized the bike had been left in Eco mode. After two taps on the Mode button, just under my right thumb, I gave it another twist. About two milliseconds later the front wheel was off the ground and I was laughing like an idiot.

There is, as it turns out, a pretty big difference between the Sport and Eco modes. Most vehicles give you the same amount of ultimate power regardless of mode, just changing how that power is delivered. Not so here. In Eco, the SR is completely gutless. I've ridden faster scooters. And so you'll only want to use it when trying to eke out the maximum range -- something you may find yourself having to do more often than you'd like.

In its default configuration, with the 13 kilowatt-hour battery pack, the 2017 Zero SR offers a claimed 161 miles. I'll just come out and say it: I couldn't get anywhere near that. Riding the bike as I normally would ride either of my motorcycles, I could barely manage half.

That is, needless to say, disappointing. I'm used to driving cars like the Tesla Model X or Chevy Bolt EV, cars that almost always do even better than their rated range, even when you drive them like normal cars.

Zero does sell a bigger $2,695 battery pack, which fills up the handy cargo compartment in the tank while digging a pretty sizable hole in your bank account. That pushes the promised range up to 202 miles -- meaning you can probably get a safe 100 miles riding normally.

Or, you can instead opt for the $1,995 charging pack, which puts a level-two charger up in the tank, letting you go from zero to charged in about two hours. By default, a full charge from empty on a 110 outlet will take about nine hours.

It really didn't take long for me to realize that I wasn't going to be able to come close to the Zero SR's advertised range. About 40 miles into my first ride, in fact. When I noticed the bike was already down to 50 percent charge I told myself I'd better take it easy.

For my second ride I had about 50 miles to cover, with a short stretch of highway in both directions. I left the bike in Eco, forced myself to be gentle accelerating away from every light, drafted as much as I safely could on the highway, and just barely got home with five percent showing on the display. That's well into proper range anxiety time.

But, when I wasn't worrying about range, I really enjoyed the bike. The storage compartment in the tank is handy, big enough for a smartphone, wallet, gloves, and a bottle of water, and the suspension, seat and position are all comfortable enough for longer rides -- rides of the sort that sadly would take you well past the range of this thing.

That said, while the Zero SR is engaging for spirited riding, I have to say I never really got comfortable really pushing it. The handling was just a bit too vague, and the pulses coming through the bars from the noisy, single-sided front brake disc didn't inspire confidence, either. A single-sided disc on a bike that weighs this much and starts at $15,995 is a bit disappointing. The regenerative braking does help alleviate the need somewhat, but not enough.

The Zero SR is a sporty machine and an interesting mix, offering more comfort than your average sportbike, not to mention a patently thrilling amount of torque. It could make a great bike for commuting or spirited rides on smooth, flowing roads. The problem is, you'll have to keep those rides short -- or be extra judicious with your right wrist. The situation improves somewhat for the 2018 model of the bike, which steps up to a 14.4 kWh battery pack and a theoretical 179-mile range, but the Zero SR needs something more significant to completely abolish range anxiety.

For me, motorcycles are about leaving your worries behind and going out to have some fun. The Zero SR is indeed fun in short doses, but I found myself spending way too much time agonizing over the battery indicator on the dash. Sign me up when this thing can get me 150 miles on a charge when ridden hard. Until then, I'll have to stick with the ol' suck, squeeze, bang and blow routine.