With sharp styling, a near-luxury interior and respectable performance mix, Nissan's Murano is tops when it comes to five-passenger crossover SUVs.

If you take a visual survey of the midsize crossover segment, it isn't difficult to peg the Nissan Murano as the standout. The class is filled with bland and blobby competitors like the Ford Edge and Toyota Highlander, making what Nissan designers did with the Murano seem brave in comparison.

The Murano's bold styling and well-trimmed interior give it a near-luxury feel. There's lot of space to accommodate passengers and cargo. Ride and handling mix strikes a good balance between cornering ability and comfort.

With a continuously variable transmission, the drivetrain drones under hard acceleration. The NissanConnect infotainment system isn't capable of running Android Auto. There's only one USB port for backseat passengers to argue over.

A highly styled, highly functional and feature rich crossover that's worth checking out if you're in the market for a five-passenger crossover.
Watch this: 2017 Nissan Murano Platinum: 5 things you need to know
01:20 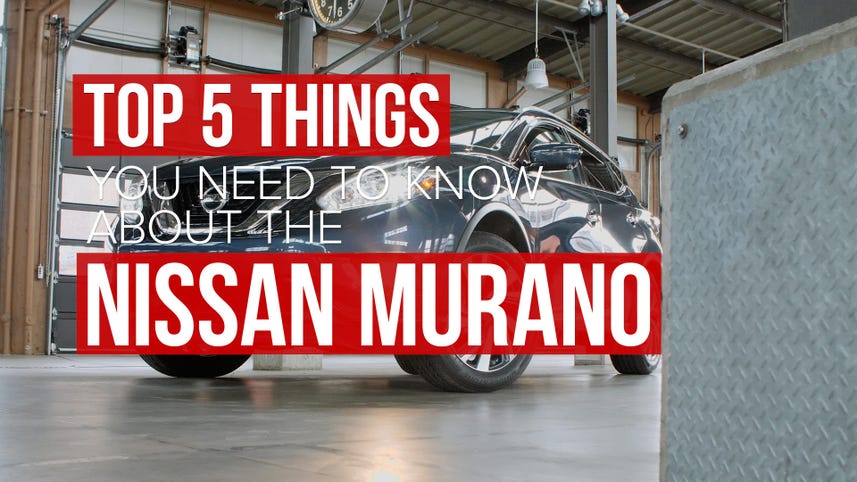 That bravery works well both inside and out. The Murano's exterior is aggressive with the V-motion grille, swoopy side accent lines and floating appearance rear roof that all rides on 20-inch wheels for my Platinum test car. Inside, the wraparound dash, stitched cashmere leather and Jasper Pearlescent trim yields a different look that works well. At night, trick cabin accent lighting give a premium ambience.

The Murano, however, isn't just a looker. Being a five-passenger crossover, it has to deliver function, as well. A weekend trip across Michigan and back shows plenty of it with enough space for front passengers and the two big guys riding in back. The cushy, but still supportive seats keep everyone comfortable, while the 31.1 cubic-feet cargo area easily swallows up four overnight bags.

Folding the rear seats down grows cargo carrying capacity to 65 cubic feet, with the cargo area wide and deep enough to haul a 2006 Honda Accord hood home from a salvage yard on a separate occasion.

During the three-hour cross state journey, the NissanConnect infotainment system is exceptional with a responsive 8-inch touchscreen. Unlike the slow and clunky systems in many Nissan products currently in showrooms, the Murano's is quick to page through menus, offers sharp graphics and features a navigation system that never leads us astray. It's also capable of running Apple CarPlay, but strangely not Android Auto.

An 11-speaker Bose sound system plays crisp tunes for the ride from a variety of sources including satellite radio, Bluetooth streaming from my Samsung Galaxy S6 and one of the phones in back via the rear USB port. The only complaint from the folks in rear is that there is only one USB port for them to fight over to charge their smart devices.

Testing all the tech

Outside of entertainment features, the road trip offers the chance to experience all of the Nissan's safety technologies. Adaptive cruise control works as advertised holding the crossover at a set speed during the journey's straight shots, automatically slowing and accelerating to stay with the flow of traffic.

Predictive Forward Collision Warning goes off a couple of times when cars abruptly slow and never for false alarms. And while I'll never stop doing over-the-shoulder checks of blind spots, the blind-spot warning system is still a nice thing to have for additional confidence while changing lanes.

In the city, it's a breeze to back into tight parking spots with the Around View Monitor providing a 360-degree, bird's-eye view of the car, while the rear cross traffic alert triggers numerous times to warn me of side-approaching cars and pedestrians when reversing, preventing me from running into anything or anyone.

When it comes to the drive itself, the Murano impresses with a punchy drivetrain, buttoned-up handling and comfortable road manners. With 260 horsepower and 240 pound-feet of torque, the 3.5-liter V6 has no problem getting the 4,017-pound SUV up to speed to merge onto the expressway. Passing slower traffics requires a heavy stomp of the throttle, but it'll get the job done.

Connecting to the V6 is a continuously variable transmission, which does admirable work here. When driving normally, steps are programmed in to simulate traditional automatic transmission gear shifts, but hard accelerating still pegs the engine at peak rpm for a slightly annoying drone.

The drivetrain combo with all-wheel drive is also fairly efficient with EPA ratings of 21 mpg city and 28 mpg highway. While in my possession, I average 22.2 mpg in mixed driving with my admittedly heavy right foot. 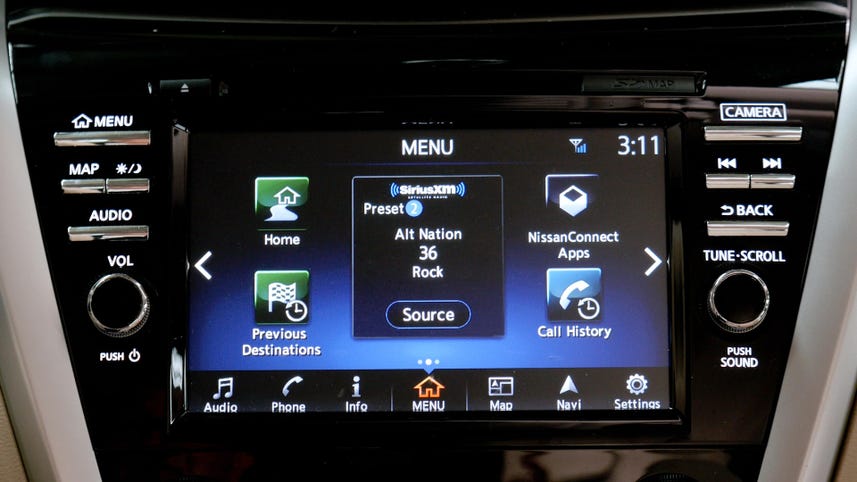 Around curves and tight turns, body roll is kept in check and doesn't fall over and die when I push harder. There's decent grip from the 20-inch Bridgestone tires. The electric power steering system's tuning is on point, with a weighty feel and quicker response to inputs for a crossover.

Don't mistake the Nissan for a Porsche Cayenne, though. It's still very much a family-focused vehicle aiming to provide good road compliance and quiet cabin above all else. Compared to direct a competitor like the Edge Sport, the Murano offers handling chops that are on par with the Ford, but better ride quality.

Have it my way

If I were shopping for a Murano, the SL model with all-wheel drive would be my trim of choice. The Platinum's 20-inch wheels, LED headlights, heated and cooled front seats and heated steering wheel would be nice to have, but are ultimately things I would be willing to live without and save a nice chunk of money.

Since I live in Michigan, all-wheel drive is an appreciated feature to have that would bring my Murano's base price in at a tad below $40,000, compared to my fully optioned Platinum tester's $44,165 sticker price. With the SL, I still would get the 360-degree camera, blind-spot warning, rear cross traffic alert and even better ride comfort with 18-inch wheels. For those who live in parts of the country without harsh winters, passing on all-wheel drive saves an additional $1,600.

Along with the aforementioned Edge and Highlander, you can add midsize SUVs like the Hyundai Santa Fe Sport and Kia Sorento to the competitor list, but the Murano still rises to the top with its looks, a well-constructed interior, tech features and performance mix. The Ford is a close second when it comes to five-passenger crossovers.