The German Godzilla is ready for you

It's one part GT3 race car, one part road car and all parts amazeballs.

If you've ever wanted to see what envy looks like, just have a gander at the Mercedes-Benz AMG GT R. Born and raised on the Green Hell north loop section of the Nurburgring, the GT R is nicknamed the Beast from the Green Hell, and for good reason.

A front mid-engine lurks under the hood, packing 585 horsepower and 516 pound-feet of torque. The 4-liter V8 biturbo throws power to the rear wheels through a seven-speed dual-clutch transmission. Top speed? Oh, just 198 miles per hour. No big deal.

The spring load in the performance suspension can be adjusted manually, so drivers can set their ride according to preferences and conditions. You can further dive down with Sport, Sport Plus and Race modes, each one combining more aggressive throttle, steering and shift points than the last.

Directly in the middle of the center console is the yellow traction control dial, but this is no mere off/on switch. Instead the GT R offers nine levels of traction control, allowing for more or less slip on the rear wheels. Wet pavement combined with the Michelin Pilot Sport Cup 2 tires and, well, you should set that to level 1. If you're an experienced driver on dry pavement, set that bad boy to level 9 and get maximum slippage on the rear axle.

Watch this: The Mercedes-AMG GT R is an apex predator
06:17 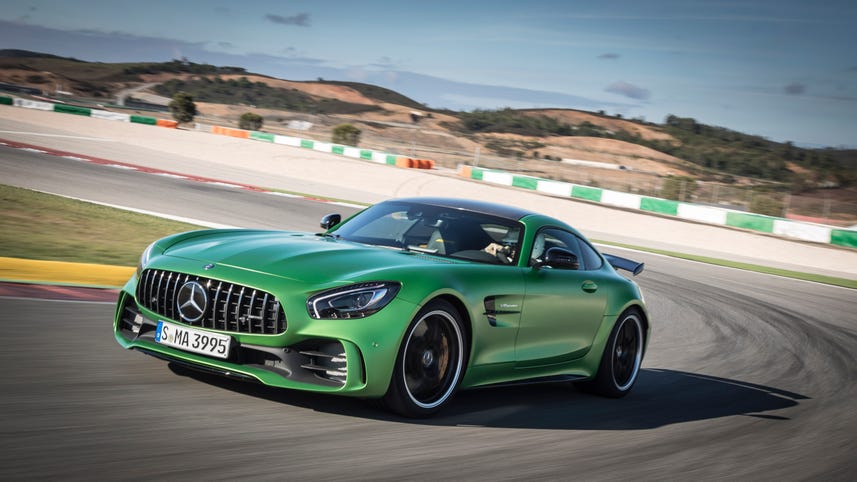 The Mercedes-AMG GT R is an apex predator
6:17
Watch Now

Aside from rear steering and a highly modifiable traction control system, the GT R is also an aero-tech marvel. Once the speedometer reads 50 miles per hour in Race mode, an active aerodynamic component, made of carbon fiber of course, deploys underneath the car. The change in air-flow helps the GT R stick to the pavement and reduces front lift by 88 pounds at 155 miles per hour.

Go green with envy for the Mercedes-Benz AMG GT R

Other aerodynamic features like automatic cooling louvers and a manually adjustable rear wing increases the downforce at top speed by 342 pounds over the AMG GT. With a 0-62 mile per hour time of 3.6 seconds, you could say this baby should speed like hell and stick like glue.

Mercedes-Benz also offers a few convertible GT models, if that is your jam. The AMG GT Roadster puts out 476 horsepower, while the more powerful GT Roadster C offers up a bit more at 557 ponies.

Expect to see more AMG models come to market soon, as Mercedes-Benz will have 48 performance AMG cars in the next year. For now, we have no idea as to the cost, but you can place your order starting November 21.