Mercedes-Benz's sport crossover has excellent adaptive cruise control technology, but the COMAND infotainment system is overwrought and too complicated.

I finally met one of my neighbors the other day. Miss Sandy is a bold and brassy mid-seventies, dresses with insouciance and has a late-model Mercedes Benz S-class tucked away in her garage. I thought she might be interested in my car for the week, the 2017 Mercedes-AMG GLE43 Coupe.

Excellent handling and a transmission that can read your mind. Mercedes' adaptive cruise control system and lane-keeping assist technology are some of the best in the business.

The COMAND infotainment is unnecessarily complicated and a bit quirky. The GLE43 is not the lightest car on the road, so it accelerates more slowly than some rivals.

If you're looking to stand out in the crowd while carving some corners, the GLE43 Coupe should be on your short list.

Miss Sandy, in her infinite wisdom, exclaimed, "You're driving that? Oh, Lord is that ugly!"

AMG is the performance arm of Mercedes-Benz, building high-horsepower variants of the standard coupes, sedans and convertibles offered by the German automaker. The two-row GLE43 is available as a standard square-backed crossover, but I got to spend time in the more, let's say controversial-looking, coupe version. You might agree with Miss Sandy about the car's looks, but Mercedes-AMG is chasing down BMW, which first brought the "coupeover" idea to the market with the X6.

Mercedes is one of the best out there when it comes to driver's aids. Distronic adaptive cruise control can bring the car to a complete stop, which is super-helpful in stop-and-go traffic. It's paired with Steering Pilot, keeping the car centered in the lane. Both really helped relieve my stress level as I crawled toward the Bay Bridge toll gates every morning in San Francisco. However, you are still ultimately in control of the car. Take those hands off the wheel and the GLE43 issues a stern warning.

The AMG GLE43 demonstrates a cool advance in blind-spot monitoring technology. Active Blind Spot Assist can apply the brakes if a lateral collision is imminent. I'm not in the habit of deliberately cutting someone off, and I'm not about to start now so I didn't get to see the technology in action. However, it's an interesting upgrade to traditional blind-spot monitoring and just shows how Mercedes is really on the cutting edge of autonomous technology.

If only the COMAND infotainment system could be so good. It's operated by a touchpad that, for me anyway, mostly doubles as a nice place to rest your hand as you operate the multifunctional dial beneath it. You can swipe and tap on the touchpad or you can push up, down, left or right on the dial to select icons on the screen. Already I'm confused. Do I use the touchpad? Dial? Touch the screen itself? Oh, no, silly mortals. The 8-inch color display looks great, but it's not a touchscreen, which makes navigating the standard Apple CarPlay and Android Auto a bit awkward.

And it's all or nothing. The navigation system in the GLE43 is much better than Apple Maps, but I couldn't use the native COMAND navigation system and Apple CarPlay to access my podcasts or music at the same time. I love listening to podcasts so I was stuck with the inferior Apple Maps during my time in the car. I could connect my phone through the Media function, bypassing Apple CarPlay entirely, but isn't the point of having the technology to actually use it? It's possible to use the native nav system while running Apple CarPlay in other sport crossovers, like the Audi Q5, and it should be possible in the Mercedes as well.

The whole infotainment system just isn't intuitive, and you have to click through menus and submenus to input any kind of command. Presetting a radio station involves seven steps of either pulling down the dial, scrolling or clicking. Even accessing that preset takes multiple swipes and pushes. It should be easier.

Fortunately, things get better behind the wheel. A whole lot better. The AMG GLE43 sports a 3-liter twin-turbo V6 under the hood, putting out 362 horsepower and 384 pound-feet of torque.

The AMG GLE43 can tow a whopping 7,200 pounds, which is remarkable for a crossover. Believe it or not, that rating is better than a gasoline-powered Chevrolet Colorado and is nearly twice as much as a Porsche Macan GTS. Hell, you could put two Smart cars on a tandem axle car hauler and still have nearly 1,200 pounds left over for a motorcycle or two.

Unfortunately the interior does not have that kind of exceptional utility. The sloping roofline compromises rear headroom, destroys the view out the back window and eliminates cargo space when compared with the traditionally shaped GLE. You're reduced to 23 cubic feet of space behind the second row and 60.7 with those seats folded down. That's less than the Jaguar F-Pace, but the same overall as the BMW X6.

Watch this: Diving into the Mercedes-AMG GLE43's infotainment system
02:51 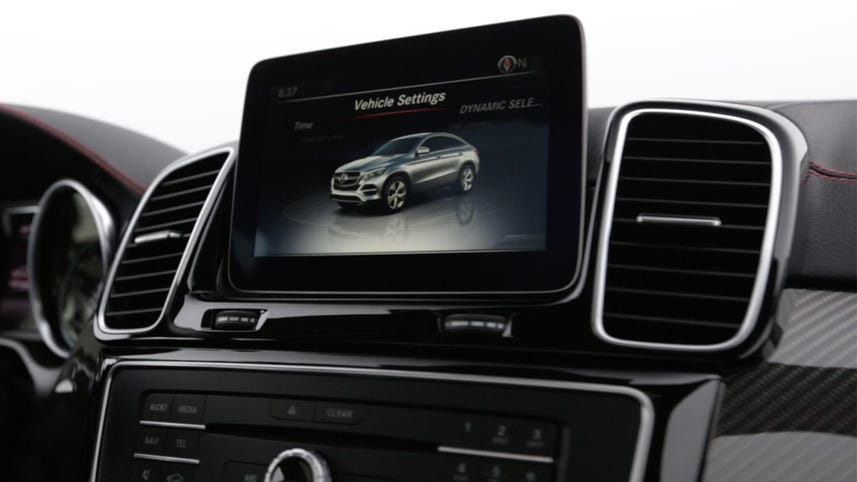 The AMG GLE43 has five different driving modes: Individual, Snow, Comfort, Sport and Sport Plus. Each will tweak the transmission, steering, throttle response and suspension parameters accordingly. Comfort is an easy drive in the park, perfect for commuting or driving your grandparents to bingo night at the Elks Club, but dial it up to Sport or Sport Plus and the coupeover becomes a roaring pavement maimer.

Perhaps the best application of the Sport parameters is in the transmission mapping. It actually shifts just as an enthusiast would during spirited driving, downshifting before the turn so the driver can feather the throttle while cornering, complete with a wailing, high-revving engine. The power is there upon corner exit, no waiting around for an indecisive transmission. Want a bit more? Dial it up to Sport Plus for quicker shifts and more aggressive acceleration with the added bonus of some titillating exhaust backfire to boot. Of course, if you want to take things into your own hands, you can always shift using the steering-wheel-mounted paddle shifts, but the GLE43 did such a good job on its own, I hardly used them.

The optional and massive high-performance tires wrapped around 22-inch wheels offer more grip than the power numbers need, but what the hell. They look good and too much grip is never enough.

To keep this heavy crossover stable in the turns, spring for the optional Active Curve System. Sure, it will cost an extra $2,910 but  I found the variable front and rear stabilizer bars to be well worth it. By constantly adjusting to the vehicle's weight transfer, it kept body roll in check, inspiring confidence in the twisty roads of my supersecret proving grounds in the hills outside of San Francisco, even at speeds that would best be described as, "Whoa, Nelly!"

For my money I'd keep the Premium 3 package if I were to buy an AMG GLE43, as I want all the nifty driver's aids with the added bonus of heated and cooled cupholders. I would also spring for the massaging seats. It's over $1,000, but screw it. I deserve them. And I would definitely shell out the $2,910 for the Active Curve System, all the better to attack those twisties.

The 2017 Mercedes-AMG GLE43 Coupe starts at $69,650. If you want the more traditional-looking SUV you can take that price down a bit to $67,150. My test model was optioned up with luxuries like a $4,550 Bang & Olufsen stereo system, heated rear seats and, I'm not joking here, $280 for air ionization with air filter, all to get the purest air possible inside the cabin. The grand total is $90,360, including destination. Only you can decide if the AMG badge and additional performance are worth all that coin. I'm here to tell you that the car drives like a dream and has excellent driver's aids, though the COMAND system is confusing.

Miss Sandy is here to judge you if you opt for the coupe.