Styling, performance and tech updates help the Accord hold its own against Toyota Camry, Chevrolet Malibu.

Now in its fifth year of production, the current Accord is due for an update, and Honda will oblige with a new generation of this midsize sedan just around the corner. The Japanese automaker already spilled a few tasty details about the upcoming model, but that doesn't mean all of the cars sitting on the dealer lots today should be written off.

The substantial overhaul to the Accord's infotainment system for 2016 didn't include the addition of a regular volume-control knob.

The ninth-generation Honda Accord is still a can't-miss option in the midsize sedan segment even at the end of its life cycle.
Watch this: 2017 Honda Accord Touring: 5 things you need to know about this benchmark family sedan
01:43 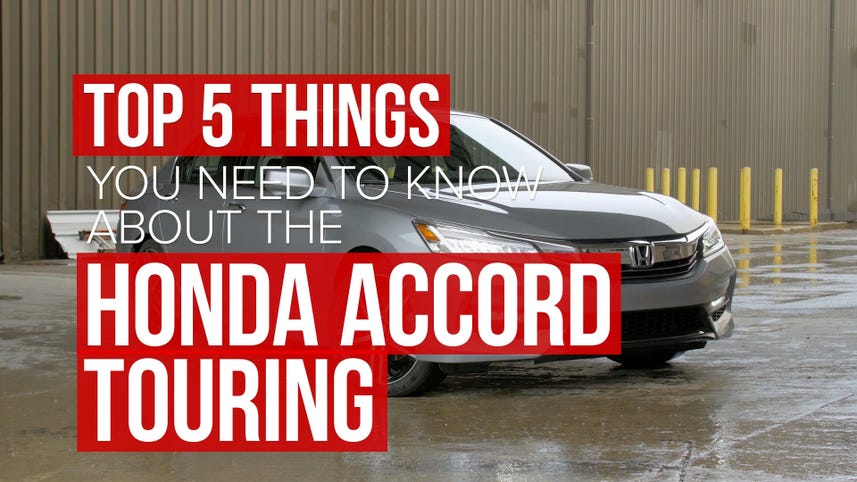 2017 Honda Accord Touring: 5 things you need to know about this benchmark family sedan
1:43
Watch Now

Truth is, after spending a week with a range-topping Touring model, I believe today's Accord remains an enticing buy in the midsize sedan segment even when you compare it against its fresher competition.

Visually, the Accord has aged remarkably well. Throughout my week with it, I received a surprising amount of compliments about its looks from a number of passengers. Some wondered when the Accord became so stylish, while one seventh-generation Accord owner called my tester the "best-looking Accord ever."

Taking a closer look at the Accord Touring's design, I see what people are talking about. A chrome grille flanked by LED headlights gives the front some attitude, while the side's subtle character lines and 19-inch wheels with black-painted insets jazz things up some. Credit the mild 2016 facelift that brought new fascias and aerodynamic improvements to give this family sedan a still fresh appearance.

Inside the roomy interior, the layout doesn't appear dated, build quality is high, materials are on par with competitors and it simply remains a comfortable place to be. There's also 15.5 cubic feet of cargo space in the trunk that comes in handy for shopping and road trips.

Keeping up in tech

Most notable among the list of 2016 updates is the overhaul to the Accord's dashboard technology. The dual-screen infotainment system's interface is much more intuitive to sift through than before. Touchscreen response to commands is greatly improved, and the addition of capacitive sensitivity enables for pinching and zooming on navigation maps.

If the better infotainment controls aren't enough and you prefer to have a smartphone control things in the cabin, last year's improvements also add both Apple CarPlay and Android Auto connectivity. Depending on your device of choice, the Accord's lower 7-inch screen will display either the Apple or Google interface.

Sadly, the addition of a good old-fashioned volume knob wasn't among the Accord's midcycle revisions.

On the safety front, the Honda Sensing suite of technology includes Lane Departure Warning, Lane Keeping Assist and Adaptive Cruise Control. Also part of the package is a great front Collision Mitigation Braking System that isn't overly sensitive and only triggers in warranted situations. Honda's LaneWatch system is also a favorite of mine, as it displays an image of the Accord's right-side blind spot on the dash's top screen when i activate the turn signal.

Not a boring ride

What's my favorite thing about this Accord? That would be its impressive handling, also sharpened in 2016 with chassis and suspension updates. The 3,605-pound sedan feels competent through curves with the 19-inch Continental ContiProContact all-season tires returning respectable grip. There's a hint of body roll through turns, but it's well controlled.

Crank the steering wheel and the front end turns in almost immediately with a nice amount of heft and feedback through the wheel. In the hierarchy of the best handling midsize family sedans, the Accord ranks near the top of the class with the Mazda6 and Kia Optima.

However, the upper hand the Honda holds over the Mazda and Kia is that it also features exceptional daily driving behavior. The forgiving suspension takes the edge off of medium to large road imperfections, while the cabin stays well isolated from road and wind noise. Its comfortable ride and interior make it a great vehicle to click off the miles.

My time with the Accord Touring also turns out to be a farewell tour with the V6 engine. Honda announced that the next generation model will follow in the footsteps of vehicles like the Chevrolet Malibu, Hyundai Sonata, Optima and Mazda6 by going to an all four-cylinder lineup.

The news makes me sad, as Honda's 3.5-liter V6 is likely the smoothest six-pot mill on the market today. With 278-horsepower and 252 pound-feet of torque, the Accord jumps off the line in a hurry. Drivers just need to be careful to not mat the throttle too hard when launching because it's easy to break the front tires loose.

Working with the engine, a six-speed automatic transmission performs slick, well-timed shifts. The pairing returns 21 mpg in the city and 33 mpg on the highway, which isn't all that bad considering the amount of muscle the engine churns out.

As much as I like the V6, the Accord I would purchase if my own money were on the line would have the 2.4-liter four-cylinder engine in it. Specifically, I would get an Accord Sport Special Edition with 189 horsepower and 182 pound-feet of torque. It's a small but effective improvement over the LX and EX models, both rated at 185 horsepower and 181 pound-feet of torque.

I would opt to have a six-speed manual gearbox bolted to the engine, which goes a long way towards making my Accord a more engaging driver over the optional continuously variable transmission. Having three pedals and rowing through my own gears also saves me the $800 it would cost to "upgrade" to the CVT.

Also drawing me to the $26,390 Sport Special Edition model is tighter suspension tuning, snazzy-looking 19-inch wheels, leather seating and heated front seats, which are wonderful things to have during Michigan winters.

Not bad for an old guy

In its final year of production, the ninth-generation Accord isn't a model limping into retirement. Thoughtful styling, performance and technology updates throughout its lifecycle are keeping it competitive right up to the very end.

It remains an excellent driver, and if you are among the small group of people who are fans of V6-powered midsize sedans, 2017 is final shot at getting an Accord with one. It'll cost you $31,870 to get an EX-L V6 or $35,665 for the Touring with all the bells and whistles. If someone decided to throw down for one of those even in this final year, I wouldn't blame them. It's still a great car even in its twilight years.