2017 Fiat 500X Trekking review: This small and stylish SUV is full of character

No, it's not the best in its class, but the smart style and jaunty performance of the Fiat 500X left me grinning at the end of every trip.

After being so very disappointed by the Fiat 500L when I reviewed it a few years ago, I was totally prepared to hate the 2017 Fiat 500X. But curiosity eventually got the best of me, and I recently found myself behind the wheel of Fiat's little jellybean-shaped SUV. At the end of a week of testing, what most surprised me was just how much I liked the 500X.

When pushed, the suspension exhibits noticeable levels of body roll, squat and dive. Even at its best, the Uconnect infotainment is fairly basic and lacks Android Auto or Apple CarPlay. At 25 mpg combined, fuel economy isn't exactly impressive.

The 2017 Fiat 500X is a solid choice for those enamored with its style and peppy performance, but there are objectively better choices in this class.

No, the X isn't the best performer or the highest tech vehicle on the road, though it is roughly on par with much of its competition. However, it performed almost every task asked of it with a flair that just left me grinning all week long. This is a car that's just bursting at the seams with character and personality that makes this average performing compact SUV one of the better vehicles in Fiat's lineup.

The 500X's dashboard is home to one of three tiers of infotainment hardware; the Uconnect 3.0, 5.0 or 6.5 systems indicate the screen size as well as the level of sophistication offered to the driver.

The base 3-inch system is a bare-bones unit with a four-line monochrome display that only covers the basics of AM/FM radio, USB and iPod connectivity and optional satellite radio. At the top of the lineup is the 6.5-inch color touchscreen system that uses the same great Uconnect infotainment software that we've seen and loved elsewhere in the Fiat Chrysler lineup with solid voice commands, Garmin maps for navigation and routing, Bluetooth audio streaming for smartphones and Siri Eyes-Free for iOS devices.

Our example was equipped with the middle-of-the-road Uconnect 5.0 touch system that loses navigation but keeps the more robust Bluetooth functionality intact. At this level, you get Bluetooth audio streaming and hands-free calling, and it can even read inbound text messages aloud to you and you can respond with voice commands. The largest Uconnect system also features integration with Fiat's Uconnect mobile app that allows control of the Pandora, Aha, iHeartRadio and Slacker apps on a paired smartphone from the the dashboard.

The 5-inch system gets the job done, but I you'll want to either select the 6.5-inch unit when spec'ing your 500X or invest in some sort of smartphone cradle. All three systems lack Android Auto or Apple CarPlay connectivity, so the only way to get navigation without fiddling with your phone is to go with the largest unit.

Watch this: Fiat's cutesy SUV has a nice personality
05:39 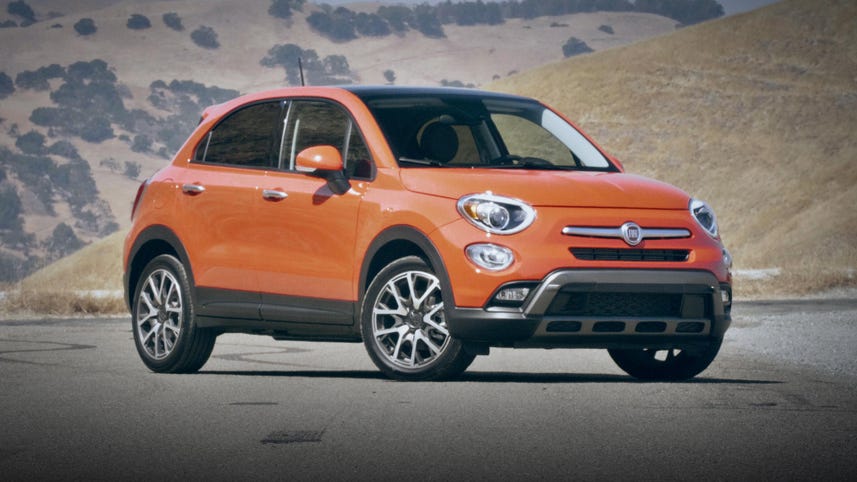 We also had the upgraded Beats Premium Audio system optioned, bringing an eight-channel 506-watt amplifier and nine speakers (including a subwoofer) along for the ride. This system punches loud and clear with audio quality that seems well suited to modern pop, rock and electronica.

The dashboard tech is fairly basic, but the 500X fares better when we turn an eye to safety. Our Trekking trim level was equipped with an Advanced Safety Package that adds, well, many advanced safety features.

The $1,295 package gets you automatic high beam control, blind-spot monitoring, Lane Departure Warning Plus (which applies corrective steering when the vehicle drifts out of its lane) and Full Speed Forward Collision Warning Plus (which can automatically apply the brakes to attempt to prevent a forward collision). When reversing, the 500X also gains rear cross traffic alerts and rear proximity sensors. That's not a bad suite of upgrades for the price.

The 500X is missing adaptive cruise control and automatic parking assistance, but most of its direct competition is lacking here, so this isn't a particular knock against the Fiat. Our example also featured and optional rear camera as part of a separate package, which I was disappointed to see missing from the standard features list.

Most 500X models are powered by Fiat's 2.4-liter MultiAir engine. This naturally aspirated four-banger is good for 180 horsepower and 175 pound-feet of torque, which is a decent amount of grunt for this 3,000 pound compact SUV. Torque is sent through a nine-speed automatic transmission on its way to the front wheels, but an optional all-wheel drive system is available at an additional cost. (How much additional depends on the trim level, but expect about $1,900.)

The drive mode selection knob allows the powertrain to be toggled between sport, normal and snow settings. The only real difference between these modes I noticed is the mapping of the throttle response. Sport is more aggressive more immediate tip-in, snow is less aggressive to help prevent wheelspin in low traction situations and normal splits the difference with neutral throttle response.

Power isn't overwhelming, but the 2.4-liter provides a good amount of pep off of the line and at the midrange, especially in its sport mode. This makes the 500X feel nice and responsive when leaving traffic lights and around town. The engine sort of runs out of steam in the upper reaches of the tachometer's swing, but with nine gear ratios to chose from, it doesn't exactly feel underpowered for highway passes. However, waiting for the gearbox to figure out which of those nine speeds is best for a pass can leave the 500X feeling less responsive than I'd like on the interstate.

Handling and steering, likewise, feel really good at low to midrange speeds. Initial turn-in is nice and immediate, which lends the 500X a playful feel around town and even on a reasonably twisty backroad. In urban environs, the handling and acceleration just work well together

However, push too hard and the limitations of the twist-beam rear suspension and the SUV's tallish center of mass become apparent in the form of noticeable levels of body roll around corners and squat and dive when accelerating or braking. Don't treat the 500X like a sports car and you probably won't be too disappointed.

The fuel economy, however, is merely adequate. The EPA estimates the front-drive 500X at 25 mpg combined, 22 mpg in the city and 30 mpg on the highway. I averaged 23.3, which is right in the ballpark, but those aren't exactly brag-worthy numbers. At the very base Pop trim level, the 500X steps down to a 160-horsepower, 1.6-liter turbocharged engine and up to 28 mpg combined, but even that number is bested by the likes of the Honda HR-V or Mazda CX-3.

Subjectively, I really like the Fiat 500X. It's a stylish little SUV with decent tech, a solid suite of available safety tech and peppy performance that left me grinning at the end of every stolen jaunt into the hills. And for most of the 500X's target audience -- think teen's first car or graduation gift for a college student -- this is a solid choice.

Objectively, however, it's a fairly middle-of-the-road choice in this class. The Fiat stands apart with better than average advanced driver aid technology, but etter performance, efficiency and smartphone-friendly infotainment technology are available from the competition from Honda, Chevrolet and Mazda. Even the 500X's fraternal twin, the Jeep Renegade, proves competitive with similar levels of cute-ute style and much more robust off-road performance for active lifestyle types at its Trailhawk trim level.