If you're looking to buck the SUV trend and stick with a sedan rather than a crossover, you can't do much better than the Malibu.

Things are getting harder for the humble family sedan. With gas prices staying cheap and a string of ever-more-enticing crossover SUVs hitting the market, you can understand why many families are choosing to go with something bigger and taller than the plain 'ol four-door of the past.

Solid looks, performance and economy are paired with plenty of family-friendly features.

Lane departure system could be more advanced, but there's honestly not a lot to dislike.

A really solid choice, if perhaps not the most exciting one.

Any sedan that wants to survive must be really good, and thankfully, the 2017 Malibu is exactly that. It has great looks, solid performance and an extra helping of family friendly special features that bring it straight to the head of the class -- especially if this is a car you'll be lending out to some student drivers.

Refinement on a reinvention

The Malibu debuted back in 2015, radically redesigned and -- surprisingly -- quite striking to behold. That car rolled on a wholly new chassis that was lighter and stiffer than before, enabling this big sedan to feel more lively than it really had any right to.

In the 2017 model year the looks and the feel are retained, bolstered to a new, nine-speed automatic transmission that is most notable in the way that you really won't notice it. It shifts cleanly and smoothly, skipping gears as necessary to keep you in the appropriate rev range for performance or economy while doing so with minimal fuss.

For 2017 you have a choice between two engines that sound too tiny to move this big sedan with much vigor, and indeed the smaller of the two, the 1.5-liter with 163 horsepower, is on the lower end of what might be considered acceptable. Our test car had the bigger, 2.0-liter turbocharged four-cylinder putting out 250 horsepower. It felt perfectly suited to the car, offering more than adequate acceleration and, perhaps more crucially, excellent fuel consumption.

This engine is officially rated for 33 miles per gallon on the highway and 26 mpg combined. We actually did considerably better, averaging just over 30 mpg in our combined testing, netting 36 mpg on a long highway stretch. For a car this big, that's impressive.

Focus on the family

In the auto industry, the concept of a family sedan may be about as trendy as T-tops and pop-up headlamps, but the Malibu shows there's still life here. This starts with a roomy, comfortable interior that will easily fit four adult-sized people, even a fifth without too much squirming, plus all their associated baggage in the gargantuan trunk.

Materials are more than acceptable given the bargain pricing of the base model, though the color variation on our test car left a bit to be desired -- unless you like all black everything.

It's what's lurking beneath that monochrome dashboard that has the most to offer, though. The 2017 Malibu offers Chevy's latest MyLink system, which is snappy and feature-packed, offering the usual suspects on the entertainment front (SiriusXM, Bluetooth A2DP, Pandora, etc.) plus a more-than-passable navigation experience. But, perhaps more importantly, there's support for both Android Auto and Apple CarPlay here, meaning you can basically bring your own. 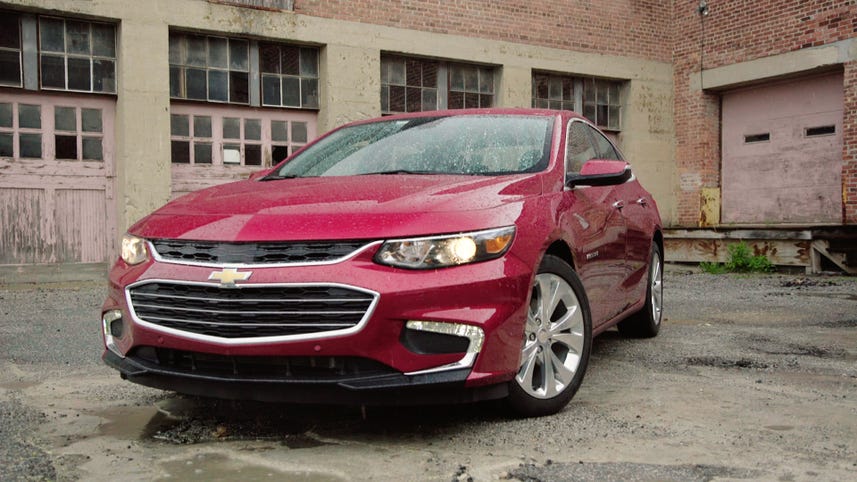 The Malibu also features Chevy's Teen Driver mode, which is a great feature if you'll be lending this car out to questionable drivers of any age. One of the car's keys can be programmed to enable this mode and, whenever that key is used, things get a bit restrictive.

The maximum volume of the stereo is limited, for example, and it can't even be turned on until the driver buckles their seatbelt. The car's maximum speed is reduced, none of the safety features can be disabled and, once that person brings the car back, they're given a comprehensive report card indicating how many times they did something unsavory, like tailgating.

Regarding those safety features, our test car had plenty. Equipped with the $1,195 Driver Confidence package and the additional $995 for Driver Confidence II, the duo adding automatic emergency braking, rear cross-traffic alert, adaptive cruise (capable of bringing the car to a complete stop) and a lane-keep assist system that will steer you back into the lane should you start to wander. But, left to its own devices it'll have you ping-ponging your way down the highway. Better stay alert, then.

The Malibu stacks up against the Toyota Camry and Ford Fusion, as we lined them up last year for a Roadshow Rivals. Even if you're not looking for a hybrid these are still the most comparable options, but things have gotten a bit more complicated since last year.

That's because there's a new Camry coming very soon, so it's a little difficult to recommend the outgoing one at this point. The Fusion is another story, now getting long in the tooth but squaring up against the Malibu with its $22,120 starting MSRP. Its two base engines also pair nicely against the Malibu's offerings, but the Ford has a third engine choice, a turbocharged V6 putting down 325 horsepower through all four wheels. So, if you're looking for more performance, the Ford would be the way to go.

How I'd configure mine

The starting price of the 2017 Chevy Malibu is $22,555, and for that you'll get yourself a nice looking and driving car that'll be a little lacking in power and safety features.

Personally, I'd start with the $26,000 1LT trim and then pay the roughly $2,300 for the various packages that add in all the driver safety systems. Yes, that means making do with the smaller motor, but this isn't a car I'd necessarily go to if I were in a hurry anyway. Might as well save some cash up front and get better economy in the long haul.

Of course if you really want to be economical, consider opting for the hybrid version which starts just under $29,000. We reviewed that last year and came away very impressed with its peppy acceleration and Volt-like practicalities.

You really can't do much better for your money in this segment. The Malibu is a great-looking, nice-driving, feature-packed alternative to all those boring crossovers. It's also cheaper to buy and to run than most.