The GT3 RS is a street-legal race car that will probably make you a better driver...if you can afford it.

When the 2016 Porsche 911 GT3 RS arrived at Gingerman Raceway, a small argument broke out. Actually, a melee of Roadshow editors elbowed each other out of the way to hop behind the wheel and take the 500-horsepower street-legal racecar out on the track.

Not much in terms of media and connectivity. If you want even a simple USB port, you have to upgrade to the Porsche Communication Management System.

The GT3 RS is super spendy but if you have the coin, it's tough to find a better performance car.
Watch this: Porsche GT3 RS passes them all on the track
03:11 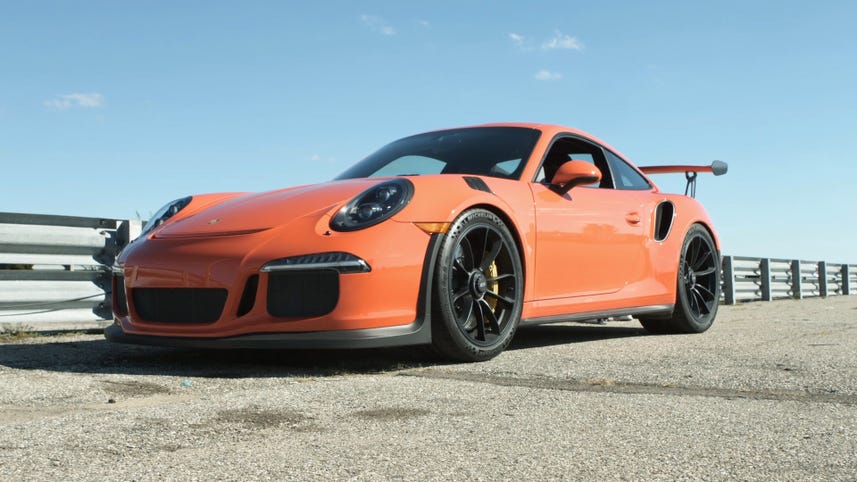 Porsche GT3 RS passes them all on the track
3:11
Watch Now

I emerged bruised and battered from the brawl, but nevertheless got to thrash the GT3 RS around the 2.14-mile track, where it earned a top space in my heart.

The GT3 RS starts where the standard GT3 ends. It's got 50 more horsepower and a bit more torque. Vents cover the body while a big fancy-pants wing sits on the back, and its hips would make Shakira hang her head in shame. Those fenders are stuffed with staggered wheels wrapped in Michelin Pilot Sport Cup 2 tires, sized 265/35-20 in the front and a whopping 325/30-21 in the rear.

Porsche employs a lot of what I like to call "small small catch monkey" tactics to add lightness. The small weight savings from a carbon-fiber trunk lid, hood, wing and spoiler, as well as an ultrathin magnesium roof, results in losing 22 pounds of weight when compared to the standard GT3. Fabric door pulls and no backseat help keep weight low, but don't worry, air conditioning, navigation and a radio are still available.

Many race car tricks keep the GT3 RS barreling down the track and not, say, crashing into the wall at the first turn. The rear wing generates 485 pounds of downforce in addition to the 243 pounds of downforce delivered by the front splitter and vented front fenders, enhancing grip. Although it takes a speed of 186 mph to get full downforce, I was plenty happy with whatever fraction I had as I crested 140 mph on the rear straight.

On the wing of love with the Porsche 911 GT3 RS

Keeping the GT3 RS flat and neutral through the turns is one word: adjustable. As in, adjustable front suspension and adjustable front and rear anti-roll bars. Also on hand is an electronically controlled limited-slip differential, and a nifty rear-steering system. At speeds under 50 mph, the rear steers opposite to the front, resulting in a tidier line. Put a little pressure on the right pedal and the rear wheels turn in the same direction, sort of crabbing the GT3 RS along the turn.

Normally I'm not one for all these fancy electronic interlopers in my track day fun, but Porsche does it right. From the first scream up to 8,250 rpm, the shifts of the seven-speed Porsche Doppelkupplung (PDK) gearbox were heart-stopping.

A word here about the gearbox: no manual is available. The old-lady purist in me has to say how shameful that is, but if you're gonna have a dual-clutch transmission, you want a PDK. It shifts faster than any human ever could, slapping into gear with a satisfying "thwap." Even when the car does the shifting, it holds gears all day long until unleashing all 500 horses. Only then does it shift to the next gear, climbing even faster back to peak power.

Over and over again, I lapped the GT3 RS, reveling in what is now one of the last naturally aspirated 911 models available. The four-liter, flat-six-cylinder engine produces such a wail; a glorious sound that I never wanted to end. The six-piston front and four-piston rear carbon-ceramic brakes come as a pricey $9,210 option, but increase the drilled and slotted discs to 410 mm in the front and 390 in the rear. I was able to dive into corners with abandon, and if I turned in too late, the rear steering kept me on the proper line. A few tugs on the paddle shifters and pow! Off to the next corner like a bat out of hell.

I'm nowhere near a good enough driver to deserve this car. Only experienced pavement racers will be able to wring everything out of this GT3 RS. 339 pound-feet of torque get the Porsche from zero to 60 mph in 3.1 seconds, and the top speed of 193 mph is so far from my comfort level as to be almost unattainable.

Still, I felt like it brought the most out of me as a driver. Because it's so flat and poised through the turns, so planted and grippy, I found myself taking some thoughtful risks that I would never think of trying in a 707 horsepower Hellcat. I found myself daring to brake just a touch later, risking a few more miles per hour more down the back straight, hazarding a quicker stab back on the gas.

On the street, be prepared for looks and yes, eye rolls. After all, you're now the douche-nozzle driving a race car on the street. A front axle lift system, a $3,490 option, helps mitigate any scrapes to the underside from pesky driveways or speed bumps. The carbon-fiber front seats are adjustable manually front to back but also have an electronic height adjustment. They are tough to get in and out of, but are mostly comfortable once your butt is planted. You could easily spend as much as a midsize sedan on the options for leather, carbon fiber and brushed aluminum trim in the interior.

Infotainment in the GT3 RS is pretty minimal. The basic Porsche CDR audio system with a 7-inch touchscreen is standard, although it can be deleted at no cost if you're worried about the extra weight. If you want a USB port, CD player and navigation, you'll have to upgrade to the Porsche Communication Management system, which is what came in our test model. Neither Apple CarPlay nor Android Auto are available on the 2016 model, but the entire 2017 Porsche line-up will feature Apple CarPlay.

Is it worth it? Let's just say that when I win the lotto, I'm going straight to the Porsche dealership.