2016 Lexus GS F review: Lexus' latest high-performance sedan is a star on and off the track

We hit the track and street to give the Lexus GS F's 467-horsepower V8 engine and suspension upgrades a thorough workout to see if it has what it takes to be a BMW M5, Mercedes-AMG E63 and Cadillac CTS-V alternative.

Blitzing GingerMan Raceway's back straight in the Lexus GS F at 120 mph all day is easy, but braking for the 90-degree right hander at the end gets sketchy after a few laps in a street car. Seven rotations later, I'm still smirking as the V8 howls at wide-open-throttle, and surprisingly the brakes show no signs of fade.

The GS F's V8 is responsive and sounds magnificent at wide-open-throttle. Automatic transmission is smooth around town, but also delivers dual-clutch-like performance on track. Chassis and suspension tuning yields great grip for hard driving, but still has enough give for daily running.

Since the GS F doesn't have a force-induced engine, it's down on power compared to its German and American competition. Lexus infotainment systems still aren't able to run Apple CarPlay and Android Auto.

The Lexus GS F is outgunned in the power department, but it's still a worthy high-performance sedan offering an attractive mix of punch, handling, looks, luxury and involvement from behind the wheel.
Watch this: 2016 Lexus GS F: A high-performance luxury track star
02:24 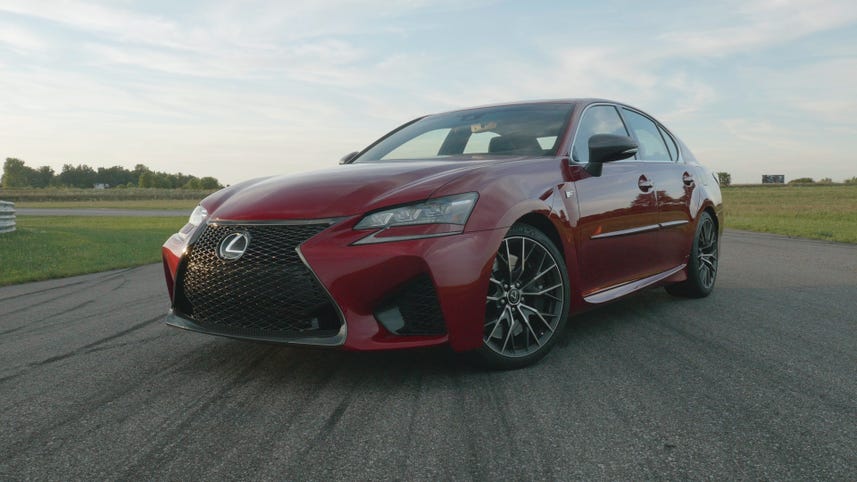 After a few more sessions out, my admiration only increases for the GS F's excellent handling, responsive and weighty steering, playful nature and fade-resistant Brembo stoppers. This is a Lexus that's legitimately fun to wheel around a race track, and built to handle the grueling exercise. It doesn't feel over-engineered and void of personality, which is something I wouldn't have expected from Lexus, given its history.

Toyota's luxury division initially rose to prominence with its reputation of producing well-built, smooth and coffin-quiet vehicles. The knock against them were that they lacked drive character, soul and visual flare. Things have changed, though, with the effort put into becoming a serious performance threat to its German and American competition now paying off.

The GS F is the second sedan in the Lexus performance lineup to receive the full F makeover, following the first-generation IS F that includes bigger power, extensive chassis revisions, suspension upgrades and more aggressive looks. With it, Lexus aims to give the likes of the BMW M5, Mercedes-AMG E63 and Cadillac CTS-V a run for their money.

The idea of Lexus producing performance vehicles on par with BMW and Mercedes-Benz is something that I'm still getting used to, but the GS F unearths memories from five years ago, when I flogged the LFA supercar around this very same 2.1-mile west Michigan circuit. Prior to piloting that V10 animal, I didn't think Lexus could produce a sporty driver, period. Now in the GS F, I see some of that LFA magic.

This GS F becomes wildly entertaining on track with Drive Mode Select in Sport S Plus, unlocking all of the V8's fury, tightening steering and activating the stability control's Expert mode, which kills traction control and gives you enough rope to pitch through corners sideways. If you get really out of shape, however, the computer still cuts in to save your keister.

Most impressive is how the GS F behaves when you stop screwing around and put down clean laps. Sharp turn-in gets the nose quickly darting in whatever direction you tell it, while it hangs on through corners with superhero-like composure. It handles GingerMan's fast transitions beautifully, and exhibits only a smidge of understeer through the really tight stuff. It feels solid and eager, thanks to upgrades like additional underbody braces, bigger and stickier Michelin Pilot Super Sport tires, torque vectoring rear differential and reworked suspension.

The fixed suspension uses Sachs mono-tube shock absorbers with steel springs, which some may skewer as a cheaper alternative to adaptive suspensions found on the M5, Audi RS 7 and CTS-V. True, the GS F doesn't have as wide of a damping range, but Lexus' tune works well for the track and street.

Lexus makes the steering communicative, tricky to do with an electric system. And the torque vectoring diff, which overdrives the outside wheel in a turn, helps in getting the power back on in corners.

Speaking of power, the five-liter V8 punches in at 467 horsepower and 389 pound-feet of torque. Those numbers may sound weak compared to the force-induced nuclear reactors in some of its rivals. Today, the M5 has 560 horsepower, the RS 7 Performance packs 605 ponies and the CTS-V comes with a staggering 640 horses.

If you're horsepower drunk and value bench racing with your buddies yammering about specs, then the Lexus isn't going to be for you. However, the GS F's engine does have its benefits. Being naturally-aspirated, the V8 features a linear powerband as well as lively throttle response, and it belts out magnificent sounds at full bore.

Out on track, I never thought the GS F too slow or needed more thrust. It shoots out of corners and down straights in rapid fashion, which can also be attributed to the car's lighter 4,034-pound curb weight, hundreds less than most of the competitive set. Lexus claims a 0-to-60 mph time of 4.5 seconds, which is quick, but off the Bimmer's 4.1-second time, and the 3.7-second claims for the Audi and Caddy.

High marks go to the F's eight-speed automatic gearbox. Exceptional manual shift response for up and down gear changes matches many dual-clutch units out today, but the torque converter delivers better daily driving performance when you don't find yourself at a road course. For the hardcore enthusiasts, I'm sorry to say that Lexus continues to disappoint by not offering a manual.

Taking it to the streets

Away from the track, the Lexus rides a touch firm over bumps, but works fine for regular commuting. With the Drive Mode selector in Normal, the V8 putters smoothly around town at low rpm while returning 16 mpg in the city and 24 mpg on the highway, according to the EPA. The transmission performs imperceptible gear changes, and steering feel lightens for a more relaxed experience.

The spacious cabin lined with leather, Alcantara and carbon fiber stays quiet from bothersome road and wind noises. Highlighting the interior, the sport seats not only look cool, but hold you in place with good support, and prove comfortable for a drive across a state.

When the V8 isn't filling the cabin with music, there's a great 17-speaker Mark Levinson audio system for regular tunes. In addition, the infotainment system features a 12.3-inch center screen, navigation, Bluetooth and the Lexus Enform App Suite that uses a smartphone connection to stream music, make dinner reservations and purchase movie tickets. I'm coming to terms with the Remote Touch controller, too, but it's still more distracting to use than Audi's MMI or Benz's Comand system while driving.

People who prefer Apple CarPlay or Android Auto as their infotainment interface of choice remain out of luck. The company says both remain in development, but decline to give a time frame on when they'll arrive.

It wouldn't be a luxury car without some safety tech, so the GS F comes standard with automatic emergency braking, blind-spot monitoring with rear cross-traffic alert, and radar cruise control. The last one makes my 180-mile drive back from western Michigan to Detroit a breeze, and did an admirable job keeping with the flow of traffic.

Finally, the GS F looks the part with its spindle grille undercut by a carbon-fiber lip. Bigger front dams direct air to oil and transmission fluid coolers, as well as front brakes and then exit out the wider front fenders' rear openings. Different rocker panels, a carbon spoiler and stacked exhaust outlets set this car off from the mundane GS model.

How many customers will the GS F draw away from the more muscular competition? Not an overwhelming number, but those who put this Lexus in their garage will be treated to a car that makes a statement with balanced performance capabilities, and not brute force. The blueprint Lexus uses for the GS F is similar to the one BMW used for its older M5s, producing a car with adequate power and snappy handling that you drive, instead of merely hanging on for dear life.

Even with spec sheet deficiencies, if I was shopping this segment, there's a good chance the underpowered Lexus would be the car I take home.