It's all you'll ever need...and then some.

I've always said the Dodge Challenger is the only big car that would make me cheat on my own little Miata, but that claim has been based on emotion. I'd never actually driven one, just admired them from afar.

The car has just enough power to make you feel like a badass. The nostalgia value is high with this one.

No Apple CarPlay or Android Auto.

That, my friends, has finally changed.

I slipped behind the wheel of the 2016 Challenger Scat Pack at an old airstrip. Too impatient to worry about launch control, I slammed my foot on the skinny pedal on the right and held on to the wheel for dear life. The 6.4-liter V8 engine produced a glorious noise as the eight-speed automatic transmission blipped through the gears, and suddenly I was approaching the end of the runway at 140 mph.

It's been great to see the muscle car wars of the 1970s heat up in the new millennium. Ford, Dodge and Chevrolet have been pulling out all the stops, trying to turn their high-horsepower drag strip kings into machines that can also conquer the twisties.

At 485 horsepower and 475 pound-feet of torque, the Challenger Scat Pack lies below the crazy-pants 707-horsepower Challenger Hellcat. But the Hellcat starts at $64,195, and good luck finding one at that price as dealer markups have been a bit out of control. The Challenger R/T Scat Pack starts at a much more reasonable $37,995 and gets a cool drag-racing bumblebee badge.

Frankly, I was surprised at the relative nimbleness of the Challenger. At 4,200 pounds, it's a relatively heavy beast, but it handles better than I expected. My test model arrived with the optional 20-inch forged-aluminum wheels, wrapped in 245/45Z all-season performance tires. It would be interesting to see how the Challenger would perform with some good Michelin Pilot Super Sport or Pirelli P Zero summer tires.

On rougher roads, the Challenger's ride quality suffers from its stiff Bilstein suspension. It's fine for daily driving, but I found myself avoiding broken pavement when I could.

Power goes to the rear wheels through an eight-speed automatic transmission, a $1,400 option over the standard six-speed manual. Although I always prefer the manual option, this ZF automatic shifts quickly on its own or lets you blip the paddle shifters in manual mode. In the Challenger, it enables cylinder deactivation, giving the car EPA fuel economy of 15 mpg city and 25 mpg highway, up to 2 mpg better than the manual.

The Challenger Scat Pack includes a lot of features to help you get its best performance. You can set launch control to trigger anywhere from 1,500 to 3,500 rpm, while other settings let you tune the engine, transmission, steering and traction control to your liking. 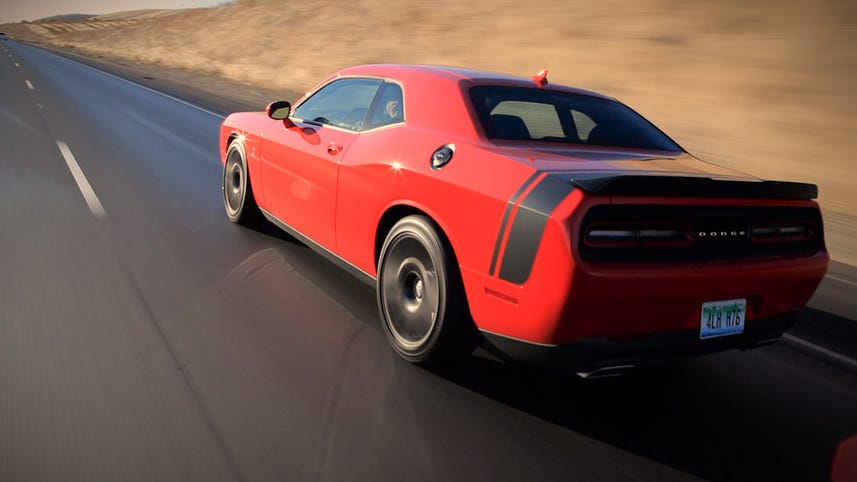 Performance Pages on the center 8.4-inch touchscreen can record 0-60 mph times, 1/8-mile and 1/4-mile times, reaction time and braking distance. Digital gauges show coolant, oil, transmission and intake air temperatures as well as voltage and oil pressure. You can track your g-forces and even see torque and horsepower in real time.

That touchscreen also displays the excellent Uconnect infotainment system. Using an intuitively organized smartphone-like interface, Uconnect features large virtual buttons, but still includes redundant mechanical controls for those of us who still like to tune the radio the old-fashioned way. Unfortunately, neither Apple CarPlay nor Android Auto is offered.

With the Garmin-powered navigation, a $795 option, voice control can be hit or miss, but it's easy to input your destination. The graphics look a bit dated, but remain crisp and clear.

Now in its third generation, the Challenger's 2015 refresh tightened up the design both inside and out. The biggest difference on the outside can be found in the split LED taillights, hearkening back to the early '70s models.

The driver-centric cabin includes a small steering wheel and a center console angled toward the left seat. The gauges and shifter both have a groovy throwback feel that takes you right back to "Scooby-Doo" on TV and Led Zeppelin on the radio.

Although a coupe, the Challenger really has interior space in its corner. The rear seat, with plenty of headroom and legroom, fits two real-sized adults, although getting in with only two doors may be a challenge for some. When it comes to putting junk in that trunk, the Challenger has 16.2 cubic feet of space, spanking the Ford Mustang's 13.5 cubic feet and the miniscule 9.1 cubic feet of the Chevrolet Camaro.

Ford, Chevy and Dodge are all duking it out for muscle car supremacy, and each has its own winning points. The Mustang GT lets you do burnouts to your heart's content with its Line Lock feature, and is no slouch on the track. I recently had the Camaro 1LE at Spring Mountain Raceway (video) and found it to be an engaging track beast, but the Challenger still holds my heart. It retains the classic lines of the original 1969 Challenger with a roomy interior, more trunk space and plenty of horsepower for daily driving augmented by the occasional track day.

The base price of the 2016 Challenger R/T Scat Pack is $37,995 but my test model with the appearance package, the optional automatic transmission, the upgraded Uconnect system and the optional forged-aluminum wheels comes to $43,575.