Cadillac's performance sedan and coupe impresses on both the road and track.

It's been a long time since a certain, blue-ovaled, American car company retired the tagline "Have you driven a Ford lately?" It was simple and catchy and effective, and it might just be time to roll that out again -- but for another American marque: Cadillac. If you haven't been inside a Cadillac in some time, you might be surprised what the brand is up to.

Exceptional performance on the track and on the road. Aggressive, purposeful styling and a great selection of tech toys.

Interior doesn't quite match that of its direct competition. The Cadillac User Interface, CUE, needs a performance boost.

The ATS-V is a remarkable car, coming straight out of the gate and standing toe-to-toe with the best performance sedans Germany has to offer.

The CTS-V was a nice statement of intent, a world-class performance sedan at a (reasonably) attainable price. Apply that same formula to the company's compact sedan, the ATS, and the result is this: the 2016 ATS-V. It too, has its eyes on the Teutonic European establishment with Cadillac again punching above its weight -- and again succeeding.

The ATS-V is a four-door, $60,465 performance sedan or $62,665 coupe that disappoints in a few respects -- but you might be surprised to learn how well it impresses in others.

People have been putting unnecessarily big motors in comfortable, practical cars since the dawn of the automobile, but with the ATS-V, Cadillac really looked at the full picture, from wheels to brakes to suspension to aerodynamics (yes, despite that angular shape). Still, it still all starts with the motor, and there's a good one here.

Beneath the hood of the ATS-V is a 3.6-liter, twin-turbocharged V-6. Power is delivered exclusively to the rear wheels through your choice of a six-speed manual or a seven-speed automatic. That auto box is the quicker of the two options, getting the car to 60 in 3.9 seconds. And it's not bad, offering paddles on the wheel for when you feel like taking control and reasonably quick, decently responsive shifts.

Go with the manual and the sprint to 60 takes 4.2 seconds, but in exchange you get yourself a very nice feeling box. A stubby, Alcantara-wrapped lever offers short, positive throws that require a bit of muscle to engage. On top of that, the manual box offers flat-shift, so if you keep your right foot hard on the gas while accelerating you need only kick the clutch and grab the next gear. The computer automatically cuts the throttle for just enough time to keep you from bending the valves or destroying the transmission.

The car automatically rev-matches on downshifts, too, but thankfully that's easily disabled if you want to show off those toe-heel maneuvers you've spent so many years perfecting.

The twin-turbos do dull the throttle response to some degree, there's no denying that; but with such a solid rush of power it's awfully hard to complain.

Yes, the twin-turbos do dull the throttle response to some degree, there's no denying that; but with such a solid rush of power it's awfully hard to complain. Get on the gas in any gear and the car seems to hunker down for just a moment before springing forward, a purposeful, guttural roar coming out of the exhaust.

Though far from quiet, among its peers -- BMW's M3 and the Mercedes-AMG C63 -- the ATS-V is definitely the most restrained aurally. Whether that is a good thing or a bad thing depends on the state of your hearing and how many counties you wish to disturb on spirited Sunday drives.

But this car is about much more than just power. Hustle the ATS-V around a track -- I'm very happy to say that I've spent a lot of time doing just that -- and the thing feels remarkably at home. The steering offers light feel but turn-in is very precise and brake feel solid, a good compromise between street comfort and track ability.

The car is quite balanced on the limit, and thanks to five hidden traction control modes (accessed by double-tapping the TC button), you can actually have a lot of fun while still knowing that the computer has your back. And, even if you opt to turn things all the way off, everything is so progressive and predictable that you'd have to be pretty rough on the throttle to get yourself in trouble.

Even should you select the ($2,300) optional sport seats on your ATS-V, you'll still find yourself sliding into a very plush, very comfortable throne. They're decently supportive, but honestly a little too soft for properly sporty antics. Step out of the C63 or M3 and into here feels like plopping into a Lay-Z-Boy.

So, too, the leather-wrapped steering wheel has a somewhat clumsy design. It offers good access to frequently used controls, but feels a little too tame for my liking. Something racier to suit the car's personality would be far preferable.

Touches of carbon fiber here or there remind you that this is, indeed, a performance-oriented machine, but the shiny piano-black plastic everywhere is just a magnet for dust and fingerprints.

Overall, materials in the ATS-V are good, but they're far from great. Touches of carbon fiber here or there remind you that this is, indeed, a performance-oriented machine, but the shiny piano-black plastic everywhere is just a magnet for dust and fingerprints.

And then there's CUE. The so-called Cadillac User Interface is approaching 5 years old and, while it's one of the most comprehensive infotainment systems on the market, it's still one of the most sluggish. After a few days you learn to work around the worst of its foibles and can start to appreciate the power of the maps, the voice control and everything else it does. But it should would be nice if it were more responsive. CUE takes 9 seconds to be usable after turning on the car, and another 16 seconds before you can use the navigation.

There's no CarPlay nor Android Auto just yet (that's coming in the 2017 model year), but the ATS-V does have one nice trick for smartphone lovers: a hidden charging cubby that hides behind the dashboard. Press a button and it opens up, offering both a USB port and a wireless charging pad. If that weren't enough, the compartment is cooled, too, keeping your Snapdragon from burning up.

However, while it's big enough to admit larger phones like the Samsung Galaxy Note 5, they have to be wedged in at an angle. This means they don't make contact with the charging pad and, alas, won't juice up wirelessly.

The ATS-V makes for a comfortable, long-haul tourer in addition to a track monster. Those seats, not supportive enough in high-G situations, are just fine on the highway -- though a bit of excessive road noise means you may not want to spend too much time droning over concrete. Also, 19 mpg combined (17 city, 23 highway) means road-tripping will cost you.

The rear seats are even more comfortable, but legroom is very limited and trunk space has been severely compromised by the suspension, but of course these are the sorts of tradeoffs one must make for a 3,800 pound car that handles like this.

In terms of on-the-road tech the ATS-V offers the usual assist features, including full-stop adaptive cruise. Lane-departure assist will gently nudge you back into the center of the lane should you start to wander, but it fails to find the middle of the lane. Left to its own devices, the system will have you playing ping-pong on the highway. Autosteer this ain't.

The ATS-V is also available as a Coupe. For an extra $ 2,000 Cadillac will sell you a car without rear doors. Antuan Goodwin on the team had the chance to hit the track with that, and had the following to say: 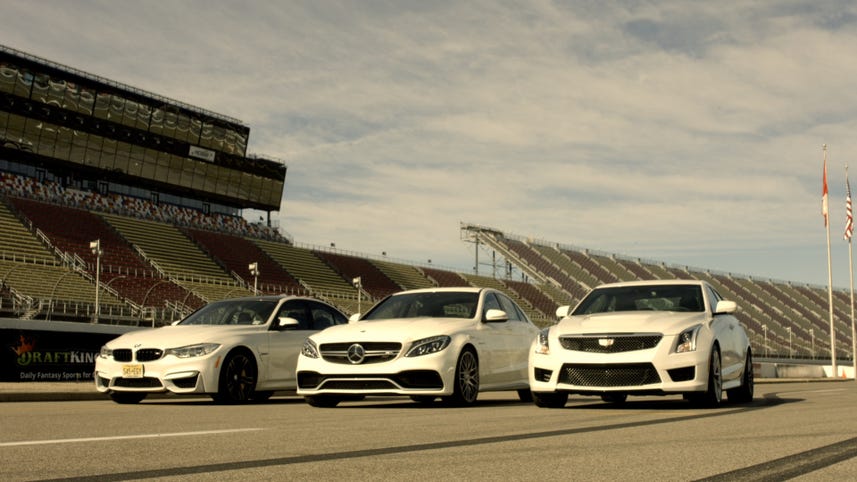 The ATS-V is far from perfect. Its interior -- particularly CUE -- has a long way to go before it will properly challenge the best from BMW and Mercedes, and there are still a few rough edges to be found elsewhere. But, the rest of the car -- the handling, the performance, the overall feel -- is so good that these shortcomings can almost be excused as character.

Regardless, the ATS-V is a great car. When we pitted it against its direct rivals, the BMW M3 and the Mercedes-AMG C63, it was the Cadillac that came out on top. Impressive stuff, and we can't wait to see what's next.