The Audi adds a heaping helping of power and performance to one of the best tech cars that money can buy.

An Audi A7 is a stellar example of automotive performance, style, liftback utility and some of the best tech in the business starting at around $68,300. It's, in my opinion, one of the best high-tech executive sedans that money can buy.

The 2016 Audi S7's flexible V-8 delivers both 450 horsepower thanks to twin turbocharging and up to 27 highway mpg thanks to cylinder deactivation tech. The sport Quattro AWD system and adaptive air suspension work together to deliver surprisingly nimble performance. The S7 also boasts some of the best cabin and driver aid technology in this class.

The 2016 Audi S7 starts with one of the best tech cars in this class and then adds a generous helping of track-ready performance.

The 2016 Audi S7 4.0T Quattro prowling Roadshow's garage this week bases at $82,900 (or $95,525 as tested, not even fully loaded). Aside from sinister good looks and a red-and-chrome S on your badges, what are you getting for the healthy bump in MSRP? The short answer is two more cylinders, about 117 more ponies of power and so much more performance. To find out how much more, we took to the track.

The S7 is powered by a twin-turbocharged 4.0-liter engine turning its crank to the tune of 450 horsepower and 406 pound-feet of torque. The engine is a V-8 configuration...most of the time. When full power isn't needed, a variable displacement system can shut down half of its cylinders, operating on just four cylinders while cruising and helping the S7 achieve its optimal highway estimate of 27 miles per gallon. City and combined estimates are stated at 17 mpg and 21 mpg, respectively.

From the flywheel, power flows through a seven-speed S Tronic dual-clutch automatic transmission and, ultimately, is split between all four wheels via Audi's Quattro all-wheel drive system with optional sport differential, the latter added by $3,500 S7 Sport package. That package also adds dynamic steering and a sport exhaust go-faster bits.

The powerful engine and quick-shifting transmission work together to launch the low-slung sport sedan to 60 miles per hour from a static start in just 4.5 seconds. From there, the S7 rockets to an electronically limited top speed of 155 miles per hour.

Filling the wheel wells are the remainder of the major performance upgrades, which boost the S7's handling prowess. From the ground up, the rubber meets the road at standard 19-inch wheels shod in 255mm wide summer tires -- our example was equipped with optional 21-inch wheels and wider 275mm wide performance tires. Behind the wheels' spokes are 15.7-inch rotors gripped by six-piston calipers on the front axle and 14-inch rotors with single piston calipers out back.

The highlight of the handling upgrades is the standard adaptive air suspension with its specific S-model tuning. The suspension features three drive modes that allow it to go from firm, low and responsive in its Dynamic mode to pliable, isolating and comfortable in its Comfort setting at the touch of a button.

Well, almost at a touch of a button. It's more like a few touches of a few buttons. If I wanted to change from the Dynamic setting to the Comfort, Auto or Individual modes for street cruising, I'd have to first tap the Car button on the MMI controller and then use the MMI control knob to select the drive mode and press to confirm. I was annoyed that the S7 lacked a dedicated Drive Select button on the dashboard or steering wheel that could just be tapped to cycle between the modes, as in some other Audi models that I've tested.

On the track at Thunderhill West

We took the 2016 Audi S7 to Thunderhill West as part of our Tesla versus Audi Shootout; there, I was able to put the sporty executive sedan through its paces on a closed race track -- no speed limits, no cops, no worries.

I began by putting the S7 into its Dynamic Drive Select mode and taking it through a few warm-up laps. The sedan impressed me with its excellent ability to accelerate, with its lightning-fast shifts and the intelligent programming of its S Tronic automatic transmission and with the Quattro all-wheel drive system's excellent level of grip and neutral handling. Body roll was a minor issue, even with the adaptive air suspension's autoleveling capabilities; even technology could only do so much to compensate for the physical realities of a vehicle this long (196.3 inches with 114.8-inch wheelbase) and heavy (4,564 pounds).

As the S7 approached its limits, understeer began to make itself apparent as physics and electronic safety nets conspired to rein in the fun.

And then, I discovered the Sport Stability program, accessed by tapping the stability control button. This hidden mode loosens the stability control system's reins and allows the sport Quattro all-wheel drive system more freedom to rotate the chassis when cornering. Honestly, Audi should relabel this the "FUN BUTTON" in big red letters, because it totally changed my opinion of the S7's performance in just a few laps.

Freed somewhat from the electronic nannies, the torque-vectoring capabilities of the sport Quattro system's rear differential can shine, changing the S7 from a powerful but understeering tourer to a truly dynamic sport sedan. Throttle-induced oversteer could be called upon with just a twitch of my right hand and, with a blip of the paddle shifter, four-wheel drifts weren't at all out of the question.

The S7's sport seats did leave a bit to be desired on the race track. The buckets were quite comfortable for daily driving and the occasional spirited session; however, after a day at the track, my knees were tender and sore from bracing myself against the door and transmission tunnel. In all fairness, the S7 isn't a race car -- despite its lapping ability -- so I think its drivers will appreciate the emphasis on comfort over supportive bolstering.

I stated earlier that the 2016 S7 will hit 60 mph in just 4.5 seconds. The fastest way to get there is by using the launch control feature. With the Drive Select set to Dynamic and the Sport Stability program activated, I came to a stop at the line. I matted the brake and accelerator pedals for a second until the engine's revs settled at the launching rpm and then sidestepped the brake pedal. The resulting acceleration literally left me speechless for a few moments as the sedan rocketed forward, all four wheels instantly grabbing traction with almost no wheelspin, and then I found myself giggling with nervous energy seconds later as I finished our shortened drag at nearly three-digit speeds.

For the 2016 model year, the S7 -- nearing six years since its A7 body launched -- has added a selection of new driver assist features, both as standard features and as part of its Driver Assistance package.

Standard features include full LED headlights and Audi's Side Assist blind-spot monitoring system. You also get a standard rear camera with parking distance sensors and a head-up display that projects instrumentation data onto the windshield to help keep your eyes up and on the road.

The best of the tech comes as part of a $2,450 Driver Assistance package that folds in adaptive cruise control that works in stop-and-go traffic, a forward collision mitigation system with autonomous braking, lane departure alert and prevention with steering intervention, and Audi's corner camera mounted on the front grille that helps drivers to see around corners when easing the big sedan out of blind alleys or parking spots.

The standard LED headlamps are also upgraded with a high-beam assistant feature that uses a forward-looking camera to automatically activate the high beams when the road ahead is clear and then deactivate the brighter lights when oncoming traffic is detected. This significantly and automatically increases nighttime visibility on rural roads, increasing the driver's reaction time.

The forward-looking cameras that help power the forward precollision system can see even farther, taking advantage of the infrared spectrum to see even farther down the road than the headlamps allow. Drivers who want to get a peek at that IR spectrum can opt for a $2,500 Night Vision package, one of the few options with which our example was not equipped.

The new processor grants the interface improved responsiveness to input and smoother onscreen animations, but the motorized display that rises out of the dashboard is starting to look a bit small and low-res compared with some of its competition -- particularly next to the Tesla Model S' 17-inch beast of a screen. I'll grant that not everyone wants a gigantic screen on the dashboard, myself included, so I won't count that against the Audi.

The 4G LTE connection feeds the MMI interface with data such as Google Earth satellite imagery when navigating and online destination search at the beginning of each trip. Traffic data, fuel prices and other convenience functions also take advantage of the connection while in the car. Telematics functions, such as geofencing and remote monitoring, can be used remotely while away.

When behind the wheel, the dashboard interface is commanded by Audi's MMI control knob, a bank of shortcut buttons and a touchpad for finger-writing addresses; all of which are located on the sedan's wide center console. The controls are well-organized, but are more spread out than the more compact MMI controls on the new 2017 A4.

Meanwhile, the instrument cluster, which features a large digital display and two physical gauges, isn't as configurable or as cool-looking as the Virtual Cockpit used on the new A4 and Q7. That said, the S7's cabin only really looks dated next to some of Audi's own offerings and, while there's plenty to look forward to on the horizon, the model we're evaluating today is still an excellent example of a modern tech car. I especially enjoyed the quality of materials -- leather, suede, metal and a very slick red carbon fiber material -- which lent a very luxurious feeling to the cockpit. 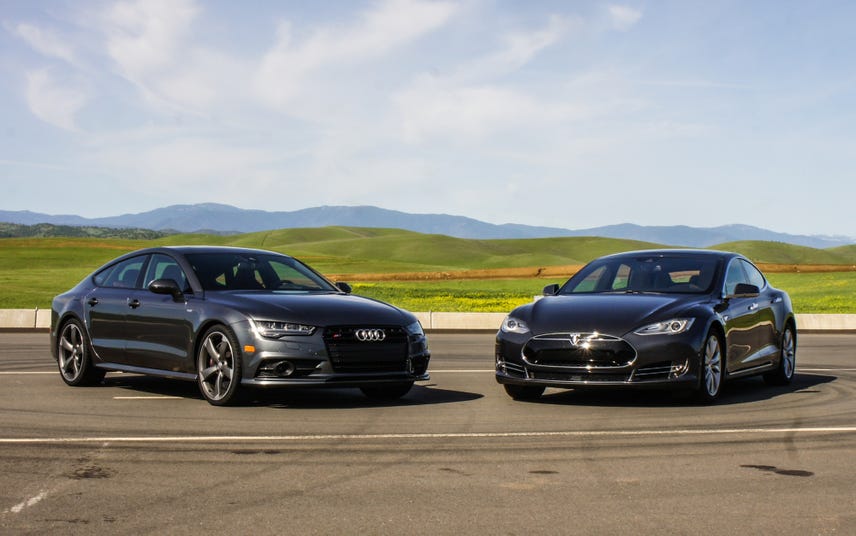 However much fun I was able to extract from this sport sedan on the track, the reality is that the S7 is still probably too big to be anyone's track toy and that most drivers really won't need the performance edge the S7 offers over the already quite competent A7 on public roads. Fully loaded with all of the tech toys and styling upgrades that Audi has to offer, the A7 doesn't even reach the S7's starting price.

That said, the S7 won me over with its surplus of power, its higher-quality interior materials and its surprisingly competent cornering capability. Have a go at launch control during your test drive and you'll totally understand why someone would pay more for the S-badge and 4.0T Quattro system.

In our Shootout, we pitted the Audi S7 against the Tesla Model S 90D, matching the two liftbacks based on their $80,000 to $100,000 MSRPs, their similar liftback body styles and their tech car chops. Another worthy competitor for cross-shopping would be the BMW 650i Gran Coupe xDrive, but that's also a more expensive car when similarly equipped that -- at least in my opinion -- still isn't really a match for S7's blend of performance, technology and style.