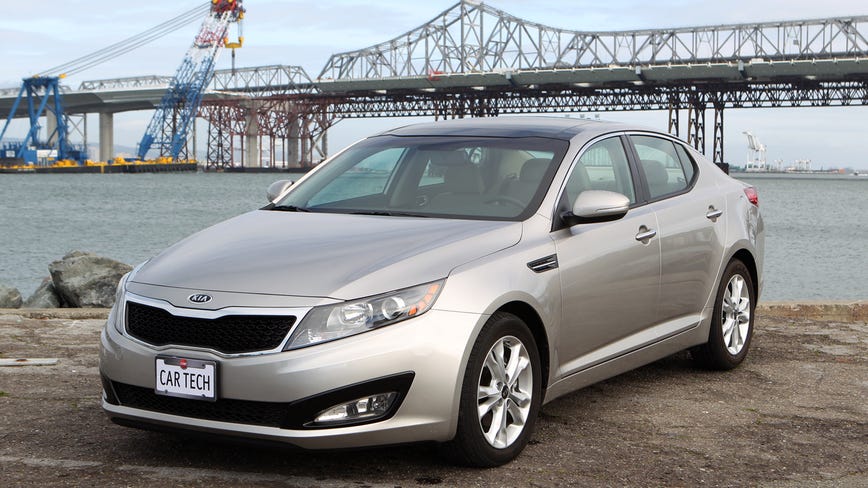 The Good Bluetooth and USB connectivity are standard and well implemented in the 2011 Kia Optima EX, even at the most basic trim level. The Technology package is a fantastic deal, rolling in navigation with traffic and premium audio.

The Bad Voice command is not available for the navigation or audio system.

The Bottom Line The larger, more powerful 2011 Kia Optima EX has grown into a serious challenger in the midsize sedan market with a high level of cabin appointments at a relatively low price.

Kia and its parent corporation, Hyundai, have been making serious moves in recent years to improve its fleet of vehicles. What was once a low-cost and low-quality alternative to the major Japanese brands now stands as a viable competitor. Initial quality, fuel efficiency, and performance of Kia's vehicles have been dramatically improved with each successive model year. However, one element hasn't changed very much: price. Pound for pound, dollar for dollar, Kia's vehicles still manage to be less expensive than the models with which they are compared.

This brings us to the 2011 Kia Optima, the Korean automaker's midsize sedan and answer to the challenge posed by the Toyota Camry and Honda Accord. With more power and better cabin technology than either of these incumbents, the Kia seems like a shoo-in for the win in a spec comparison. However, there's more to any car than the simple numbers. So, we found ourselves behind the wheel of the 2011 Kia Optima in EX trim to see just how it stacks up to the competition.

Performance and economy
Sending power to the front wheels via a six-speed automatic transmission is a 2.4-liter gasoline direct-injected (GDI) engine that outputs 200 horsepower and 186 pound-feet of torque. Factor in a curb weight that's about 100 pounds lighter than the Camry and it's no wonder that the Optima feels more alive when accelerating away from a traffic light. The Kia also manages an EPA estimated 24 mpg city and 34 mpg highway, beating the Camry by a single combined mile per gallon and matching the less powerful Honda Accord. During the course of our testing, we managed a combined 28 mpg. So far, things are looking good for the Kia.

A 2.4-liter GDI engine produces an even 200 horsepower at its peak while still delivering decent economy.

The Kia also features an Eco mode intended to help drivers to maximize fuel economy. Eco mode is activated by pressing a button on the steering wheel that adjusts the transmission and engine characteristics. Essentially, your throttle inputs will be dulled and the transmission will seek top gear much sooner than it would otherwise. We stayed in Eco mode for much of the duration of our testing (which consisted of mostly highway driving) and found it to be very livable for day-to-day driving. This button doesn't change the Kia into a whole new car, but when we'd periodically deactivate Eco for a fast start or a bit of spirited driving we were able to note the difference between the modes through the Optima's more obvious eagerness to accelerate.

Toss the Kia into a series of turns and the Optima EX certainly feels lighter than the Camry SE that we tested previously, which is odd because the Korean sedan is actually slightly longer and wider than the Toyota. Its roofline, however, sits noticeably lower, creating a coupe-like profile that apes that of the Mercedes-Benz S-Class or Jaguar XJ, a flattering comparison for a brand that was until recently an also-ran in the automotive marketplace. Unfortunately, that low roof means that while entering the vehicle this editor managed to smack his head on the edge of the roof more often than he was comfortable with. Proceed with caution.

Styling is a purely subjective matter, but we're of the opinion that the Kia's Tiger Nose design language and more low-slung, svelte proportions are more attractive than those of the bulbous Camry and angular Accord. While the Optima is not as out-there as its sexy sister, the Hyundai Sonata, the Optima does share its basic genetics. On more than one occasion, we caught pedestrians craning their necks as they passed the sedan in an attempt to figure out just what it was. Of course, your opinion may differ.

With its low ceiling, the Optima's optional dual sunroofs are a must-have feature.

A low-slung roof such as the Optima's can just as easily create a claustrophobic cabin as it can an athletic look. To combat this, our Optima EX was equipped with a dual-pane panoramic sunroof as part of a Premium package that allowed light to flood the cabin and create an airy feel. Also included in the Premium package are a memory function for the power driver's seat, the addition of power adjustments to the front passenger seat, and heated and ventilated surfaces for both. The steering wheel and rear seats also gain heating elements, features that we usually only see in the most luxurious of vehicles.

While travelling at highway speeds, we took a guess at how Kia was able to save so much weight over the heavier Camry and Accord: less sound deadening. While by no means offensively loud, the Optima seemed to transmit a bit more road and wind noise into the cabin than the competing models. However, with music playing at a moderate level, we barely even noticed. We doubt you will either.

Cabin technology
The optional Technology package is built around an 8GB solid-state memory-based navigation system that, while basic in appearance, performs quite well. By basic, we mean that the maps are only available in a two-dimensional, top-down view with no fancy 3D or three-quarters view available. Map resolution is very good and easy to read at a glance, which we think is more important than the lack of eye candy. Traffic data is included with navigation, as an add-on to the standard Sirius satellite radio connection. Turn-by-turn directions feature text-to-speech spoken street names. The touch-screen interface is intuitively organized and includes a display for an optional rearview camera. However, switching between the various modes available (navigation, destination input, audio source selection, and so on) requires using a bank of physical keys that is located a few inches below the touch screen. After a week of heavy use, we still had to take our eyes off of the road for a few seconds to find the button that took us from viewing audio playback to viewing the map. However, this is a minor hurdle that we're sure a long-term owner would eventually surmount.

Speaking of audio sources, our Optima EX was equipped with a number of them. USB and analog auxiliary connectivity are standard, as are Bluetooth audio streaming and satellite radio. Using an Apple product with Kia's audio system requires a $35 adapter. Browsing a connected iPod or iPhone is easy thanks to a responsive interface that allowed us to quickly sift through our longer playlists. More conventional audio sources include a single-disk CD and MP3 player and AM/FM radio.

The stock six-speaker stereo was replaced by an eight-speaker Infinity audio system that includes a small subwoofer with the selection of Technology package. Audio quality is balanced with a nice neutral sound that, at its flat setting, is neither muddy nor harsh. Bass output can be tweaked for a nice thump, but this is not a boomy system. However you choose to tune the three-band EQ, the Infinity system is difficult to put out of sorts, providing mostly distortion-free playback at most reasonable volumes and great staging thanks to its thoughtful speaker placement. (Oddly, the button for adjusting sound settings disappears when streaming audio over Bluetooth.) As a part of a $2,000 package that includes navigation and a backup camera, the premium audio option is quite a good value for the money.

Hands-free calling connectivity comes by way of the same standard Bluetooth connection that provides audio streaming. After a quick and easy pairing process, the Kia's hands-free system will automatically download address book entries from a compatible phone, and features a voice recognition system that lets you initiate calls without having to assign voice tags. Simply press the talk button and say, "Call Wayne at work," and--provided that Wayne is in your address book--the Kia will figure out the rest. Voice command for audio playback and destination entry would be nice, but are unsupported in this model.

In sum
The 2011 Kia Optima starts at $18,995, but that's for a spartan LX model with a manual transmission that has nearly no options available. The action starts with the LX automatic model for around $20,495, but we suggest you take a look at the EX trim level we tested. For your $22,495, you get smart keyless entry and push-button start, dual-zone climate control, and leather seating surfaces with a power-adjustable driver's seat. Add $2,000 for the Technology package, which is a better deal than you could get even in the aftermarket for navigation, a rearview camera, and a top-notch audio system. Before you can opt for the Tech package, you'll have to have also spec'd the Premium package, which adds the heated seating surfaces for all and cooled surfaces for the front seats, the very cool dual panoramic sunroof, and a memory function for the driver's seat that will make life easier for households with multiple drivers, for $2,250. Add a $695 destination fee to reach our as-tested price of $27,440. That's about $2,000 less expensive than a comparably equipped Camry and $3,000 cheaper than a Honda Accord EX-L with navigation. If we were to compare entry level to entry level, the Optima LX with automatic transmission nets an even bigger savings while still retaining standard features that Toyota and Honda charge extra for (such as Bluetooth and iPod/USB connectivity).

In the eyes of the Toyota and Honda faithful, that may not be enough of a savings to jump ship and commit to a Kia for their next new car. But from where we see it, the new Kia owner will drive away with a more powerful car with slightly better fuel economy and a better cabin technology package. Oh, and let's not forget the $2,000 to $3,000 of extra spending money in his or her pocket.

The Kia Optima is not just a good value, it's a good car.