It's not cheap, but if you want bounce-free video from your iPhone, the Smoothee is worth getting.

The idea of professional-quality camera add-ons for the iPhone might seem silly, but there's definitely a market for stuff that pushes the camera beyond its inherent limitations. And that's how you get the Tiffen Steadicam Smoothee.

The <b>Tiffen Steadicam Smoothee for iPhone 4</b> is an effective way to get smoother video while moving. It's also well-designed and well-built.

The Smoothee takes some practice to use well and for the average iPhone user, the size and cost might be overkill.

True to its name, the Tiffen Steadicam Smoothee takes the bounce out of your iPhone video clips.

The original Smoothee was announced in 2010 (we tested the mount for the iPhone 4/4S) and it works like the larger professional Steadicams, which use counterbalance weights to stabilize your camera while it's in motion. And as anybody who's shot video with the iPhone knows, moving with it while shooting -- let alone running or jumping -- can result in some potentially nauseating and unwatchable video. Use the Steadicam Smoothee, though, and that all changes.

However, it's not as simple as attaching your iPhone, pressing Record, and having your videos come out smooth. You can certainly pick it up and start shooting with it out of the box, but using it effectively takes some practice. Then some more practice.

It comes with the bare minimum of instructions, too, which doesn't help; for the most part all you get is information about how to attach your device and how to hold it. On its site, Tiffen has a four-part video series on how to control the Smoothee, but it would've been nice to have more of this information in the box.

The balance is very delicate by design and the base floats so freely that when you first use it, you might think you're doing something wrong. Controlling it is done with light pressure from your thumb and forefinger placed on the collar that's just above the swivel and below the base. Grip it too firmly and you lose the effect, too lightly and it might wobble and spin out of control.

There are two, small red knobs for adjusting tilt -- one for forward and backward and the other for left and right -- which can be used to level your shot or purposely tilt them for creative effect. A sliding weight on the curved bars in front allows you to adjust the balance as well.

Watch this: Test shots with Steadicam's Smoothee for the iPhone
01:11 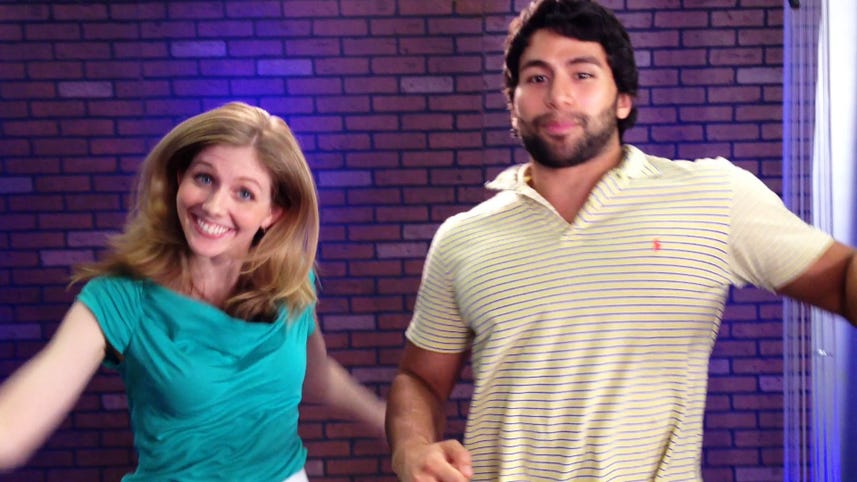 Test shots with Steadicam's Smoothee for the iPhone
1:11
Watch Now

In the video above, the camera operator is doing everything that the subjects are doing (well, except for the cartwheel). The first 25 seconds of the video were shot without the Steadicam, the remainder is with it. The results speak for themselves and that's with just a little practice. And again, with more practice comes better results.

The iPhone quick-release mount pops out of the Smoothee fast, and has a flat bottom that can be used to stand the iPhone up on a flat surface. It has a threaded insert in the bottom of it as well, so you can put your iPhone on a tripod without the need for a separate mount. Additional mounts are available for the iPhone 3GS, iPod Touch (fourth generation), GoPro Hero and Hero 2, and Flip MinoHD, at around $25 each.

Regardless of how well it works, for most iPhone users the Smoothee is overkill. Its size and weight pretty much kills the whole convenience of shooting video with your iPhone and using it well requires more effort than just taking out your iPhone and shooting a clip.

On the other hand, if your iPhone is your primary device for capturing video and you are tired of just how shaky things look, get the Steadicam Smoothee.

Conclusion: Highly recommended
Though the Tiffen Steadicam Smoothee for iPhone 4 is a luxury, it's one worth having if you shoot a lot of video with your iPhone.