With vivid colors and fun features like a music sync mode, this smart bulb looks poised to be the life of the party.

Tabu's LuMini LED is a pint-size follow-up to last year's color-changer, the Lumen LED . We got a close look at it when we were at CES in January, and now, after a successful Kickstarter campaign, the LuMini is set to begin taking orders next week. Like its predecessor, it connects with your smartphone over Bluetooth 4.0, allowing you to change the color of your light on demand.

The Tabu LuMini LED offers the same ease of use, fun factor, and high color accuracy of last year's Lumen LED. It also costs half as much.

There are no white diodes in the RGB-only LuMini, meaning that it does a terrible job when it tries to replicate incandescent light. Also, some of the features still feel a bit underdeveloped.

At $35, this flashy bulb is one of the most affordable and accessible smart color LEDs we've seen. If you want an easy way to add a little color to your life, give it a shot.

Color-shifting party tricks aside, the real headline here is the price. At $35 per bulb and usable straight out of the box, the LuMini costs just half of what you'll pay for the Lumen LED, and far, far less than what you'll spend to get set up with a Philips Hue Starter Kit . While not as powerful as either of those options, the LuMini provides legitimate color-changing charm -- and it does so without breaking the bank.

The LuMini features a short, cylindrical, pencil eraser of a bulb that sits atop a white plastic body. As LEDs go, it blends in with the crowd a little more than its heavier, aluminum-bodied predecessor, the Lumen LED. With the generally unorthodox designs of LEDs becoming more and more orthodox, it's hard to tell that much is special about this little light from looks alone.

This can't be said once the light is actually flipped on, though. Connecting your bulb to the app is a quick and nearly automatic process, and once you're set up, you'll be treated to a wide array of vivid colors. Those come thanks to the LuMini's RGB diodes, the same ones we saw in the Lumen LED. The Lumen LED's white diodes, however, are notably absent in the LuMini. Tabu got rid of them with the smaller design, and without them, the LuMini is almost incapable of mimicking natural, incandescent-style tones.

Changing among colors is as easy as swiping your fingertip around on a color wheel. That color wheel can feel a little cramped on a phone screen, though. Hitting the boldest shades of each color is simple enough, but landing on the perfect, subtle mix of purple and red might take a little bit of fiddling before you feel satisfied.

For convenience, you'll be able to add up to six bulbs into a single group, and then control them all at once. I tried this out with a LuMini and a Lumen LED, and it worked great, with minimal lag separating the two as I darted my finger back and forth on the color wheel.

Like the Lumen LED before it, the LuMini uses Bluetooth 4.0 to connect with your device, so iOS users will need something newer than an iPhone 4 or an iPad 2 in order to control it. There's an Android app as well, but you'll want to be sure that your device uses both Bluetooth 4.0 and Android 4.3 (the Samsung Galaxy S4, the Nexus 7, and the Note 3 would all work).

Android users might want to consider holding out, though, as the Lumen's Android app is still playing catch-up with the iOS version. Key features, including the music sync mode, are notably absent, which is a definite disappointment.

Despite the LuMini's smaller size, Tabu hasn't compromised much, if anything, in terms of smarts. As you play with Tabu's app, you'll find that you can control the LuMini in all of the same ways that you're able to control the Lumen LED. There's a proximity sensor that automatically turns your light on to a specific color whenever the bulb detects your phone within range, along with four color cycling presets, a mode for scheduling the light to fade on in the mornings, an incoming call alert, and a music sync mode -- exactly the same options you'll get with the Lumen LED.

The proximity sensor worked like a charm in my tests, though you'll need to keep the app running in the background. I also appreciated the wake-up mode, which will gradually turn the light on at a time of your choice. I just wish Tabu had taken things a bit further and offered full scheduling, with off times as well. As it stands, the timed controls of the LuMini and the Lumen LED still feel underdeveloped, especially compared with brainier bulbs like Philips Hue LEDs and even non-color-changing smart options like the Connected by TCP Wireless LED Kit .

The LuMini does manage to set itself apart with its music sync mode. Philips Hue still doesn't offer this directly through the Hue app, choosing instead to leave music syncing to third-party developers. Tabu's music syncing, on the other hand, is a marquee feature of the app, which feels appropriate given the bulb's obvious tilt toward fun and festivities.

The controls are a little simpler than I'd like -- you'll select a song from your device's library (or from an existing playlist), and the the light will begin flashing in rhythm with the music as best as it can, gradually shifting through a five-shade color cycle that you can customize with tones of your choice.

Music sync obviously works better with songs that have fairly obvious beats for the LuMini to catch onto, but I was still impressed with how well the bulb matched up to faster, more complicated rhythms. Plus, it was kind of fun going through my favorite songs and figuring out which ones synced up the best.

Not all of LuMini's smart features impressed me. The four cycles (two speeds of a strobing "disco mode," along with two more calming cycles) were nice to have, but I hated that I couldn't customize them, or create my own preset. And that feature that flashes the light when you've got an incoming call? I couldn't get that to work at all.

The LuMini boasts vivid, accurate colors, just like the Lumen LED does. Whether it's magenta, chartreuse, or cerulean colored light that you're looking for, the LuMini can handle it. This gives it an edge over Philips Hue LEDs, which have overpowering yellow diodes, weak blue diodes, and no green diodes at all -- all of which contribute to compromised color quality in certain parts of the spectrum.

This distinction is most evident when you start comparing shades of green. The LuMini is fully capable of putting out a wide array of green tones, which is what you'd expect from an RGB bulb with dedicated, pure green diodes. The Hue LEDs, on the other hand, have to get to green by mixing blue and yellow. Since the blue diodes aren't nearly strong enough to match what the yellow diodes put out, the Hues throw a little bit of red into the mix, too. As a result, the closest thing to pure green that a Hue LED can muster is a yellowy, tennis-ball-toned shade that just barely qualifies as green at all.

Things get interesting when you compare blue shades, as well. The Lumen and LuMini LEDs do a great job at producing a deep, rich blue, while the Philips Hue comes across as more purple, or at least indigo. This is thanks again to those weak blue diodes. When you select blue light, Philips once again turns the red diodes on as well to give the light a brightness boost, but, again, this compromises the trueness of the blue. Tabu's bulbs don't suffer from this problem.

Another interesting takeaway from the color comparisons is that the LuMini holds its own against the larger Lumen LED in terms of brightness. Yes, it's a dimmer bulb, which is to be expected, but not as noticeably so as I had expected.

This is due in part to the fact that the majority of the Lumen LED's brightness comes from those white diodes that allow it to replicate incandescent light. For colored light -- the light that we're comparing here -- it isn't using those diodes, and relies instead on a set of RGB diodes that aren't much different from what's packed into the LuMini. In terms of color brightness, the Lumen still comes out on top across the board, but it's a lot closer than you probably think.

Watch this: Putting color-changing smart LEDs to the test
03:11 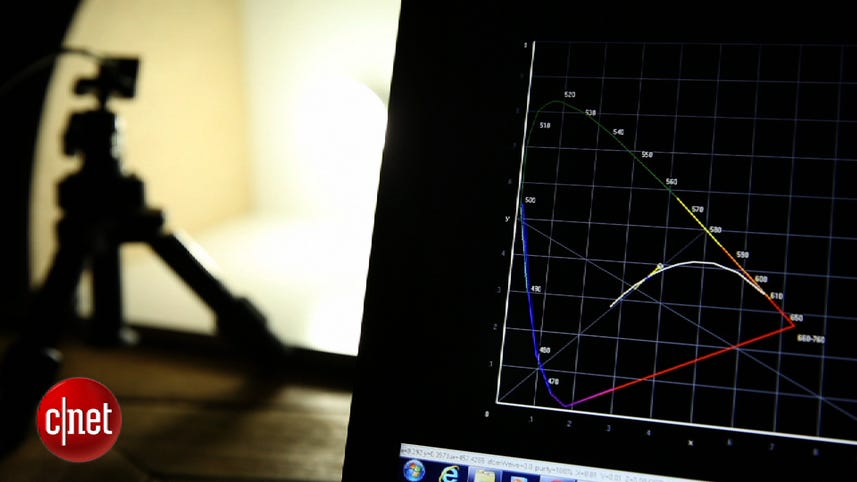 Of course, the one caveat here is natural light, which the LuMini is terrible at. Using the color wheel to try and come up with something similar to the Lumen LED's default warm white, 2,700K tone, the best I got with the LuMini was a dim, ugly, brownish play on orange. The LuMini's default tone, a dim take on bluish white light, isn't a whole lot better, or a whole lot brighter.

With the LuMini, you'll want to stick to its strength: bold colors. If natural tones of soft white, warm white, or daylight are important to you in a color-changing LED, then you'll probably want to strongly consider splurging on a Philips Hue set, as those bulbs do a wonderful job with natural tones.

The LuMini offers the same vivid, accurate colors and the same ease of use as last year's Lumen LED . The Lumen app has also been upgraded to a slightly more fleshed out and feature-rich experience. Given all of this, I think Tabu might have a big winner here. At $35 -- half of what the Lumen LED costs -- the LuMini just makes sense as the kind of fun, frivolous novelty splurge that you don't have to feel all that guilty about. If I bought a $200 smart bulb set and didn't like it, I'd feel like an idiot. If I bought the LuMini and didn't like it, I'd shrug it off.

The LuMini isn't a perfect bulb, but at this price, it doesn't need to be perfect. It just needs to be fun -- and it is. It's really as simple as that.

Features 7Usability 9Design 8Performance 7
Get the best price on everything
Shop your favorite products and we’ll find the best deal with a single click. Designed to make shopping easier.
Add CNET Shopping