The moment I downloaded Super Mario Run on my iPhone, I handed it to my 8-year-old son to play. My 3-year-old was curious, too. I never got my phone back again.

Nintendo's never put its games on phones, and Super Mario Run comes closest to feeling like a 3DS or Wii U game on mobile. I've played through a review build provided by Nintendo and finished every level.

I like it a lot. I'm finding myself addicted. I'm not sure it's really doing anything differently than other fantastic mobile games out there on phones. But, in some ways, I don't care.

Of course, this iOS game -- it's exclusive to iPhone, iPad and iPod Touch for now, with an Android release to follow in 2017 -- isn't the same as classic Super Mario. It's a one-finger experience, leaning on easier controls and an always-running Mario. But the levels, even though there are only 24 of them, feel plucked from any of the best recent Mario games. The clever level designs show off some fun ideas. The graphics, the sounds and the music are all spot-on, flawless.

But beware: Super Mario Run needs to be connected to the internet in order to work. Yes, you read that correctly. Much like Hearthstone and other online-connected games, Super Mario Run won't work unless you've got Wi-Fi or mobile data. That can be limiting in subways or planes. It's hugely annoying.

The game also costs more than most mobile games. Even though the app is free to download (here) and includes a few free game modes, the rest costs $9.99, £7.99 or AU$14.99. Is it worth the 10 bucks? I'd pay two lattes for it, but I'm having issues with its lack of offline play.

Watch this: Super Mario Run hopes to be the next Pokemon Go
02:25 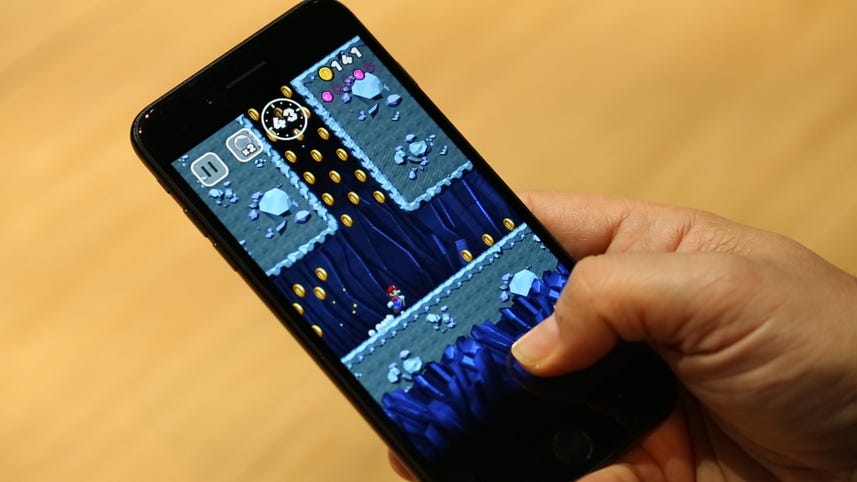 Super Mario Run hopes to be the next Pokemon Go
2:25
Watch Now

Here's what else you need to know.

My favorite part of the game is Tour, and each level's multiple challenges offer reasons to go back. Still, I finished the whole game in a day. Super Mario Run is all about mastering tricks in each course. At times, it almost feels like it's aspiring to a Mario Kart type of competitiveness, but everything in Super Mario Run is single player (the online challenges are played against recorded score runs, not live players).

The game's central idea, of speed-run Mario courses aimed at earning high scores and competition, isn't one I'm wild about. It's fun, but the stakes seem low, and the earning of Toad followers sometimes feels tedious. I played against a canned set of Nintendo challengers -- maybe playing against friends for bragging rights would be more rewarding. How this plays out socially will determine how addictive it all feels.

It's vertical Mario. The game is meant to be played in one hand, meaning vertical screens. It's odd for a side-scroller, but it works.

The courses are fast, but they still feel like Mario levels. If you've ever played a single-button jump-type mobile game (Rayman Adventures from Ubisoft comes to mind), expect something similar here. Mario keeps running no matter what you do, and even hops over small enemies automatically. Tapping or holding down on the screen is used for leaping to higher platforms, kick-jumping and spin-jumping. But the courses I tried all look like they could have come from New Super Mario Bros. Some even had some puzzle solving, and I had two tiny boss battles at the end of the fourth course in each world.

Everything is controlled with one finger. If it weren't for the online requirement, this could easily be a stand-while-riding-the-subway game (as Nintendo's Shigero Miyamoto specifically mentioned when introducing the game back in June). During actual runs, all I needed was my thumb.

The main game, even when fully unlocked, doesn't have a ton of levels. There are six worlds in the World Tour mode, just like other Super Mario games. Each world has four courses. That's 24 levels, which is less than most Mario games. But most Mario games cost more than $10 new.

Nintendo says there won't be an endless stream of paid upgrades. Thankfully, this isn't designed to be a free-to-play game that bleeds you dry with "optional" power-ups that cost "only" a few dollars. But if the game takes off, I wouldn't be surprised if a Super Mario Run 2 is hot on its tail.

The iPad version looks just the same. Expect everything to run a bit larger, but the game plays in the same way. I saw it on an iPad Mini.

Each course has three levels of coin-collecting challenges. You can try to grab five pink coins to earn a special reward, and then do it again with red and black coins. It's the game's variation on the classic Mario hidden stars or large golden coins.

You can play with Mario, Luigi, Toad, Yoshi and more. I only got to play as Mario and Toad, but each character should have its own style.

I'd buy it. I never spent more than a few dollars on Pokemon Go, and I don't like spending more than $5 on a mobile game unless it's great. But Super Mario Run seems like enough entertainment to keep me happy. Still, it also doesn't seem like the sort of massive game Mario fans playing on the 3DS or Wii U might expect.

What bothers me the most is its lack of offline play: it's unnecessary. It might turn you off from buying the game.

The good news is that the free part of the app is more than enough to get a sense if you're up to buying the whole package. See for yourself -- you've probably already downloaded it.