Who can blame Sony for trying to capitalize on the success of Nintendo's year-after-year must-have holiday gifts? The NES Classic and SNES Classic proved that the nostalgia market was ripe for the picking -- and the NES Classic's initial sparse inventory didn't hurt things either.

The PlayStation Classic packs in 20 games from the original console, including milestones like Metal Gear Solid and Final Fantasy VII. It also includes two controllers, and you can easily save your progress in the games.

Most of the original PlayStation games have a difficult time holding up in 2018. The list of included titles feels a bit lacking and we wish Sony included a DualShock controller instead of the analog-less originals. At $100, it feels expensive. Inexplicably, 9 of the 20 titles are the European versions, meaning they don't run as smoothly on North American TVs.

The PlayStation Classic is a serviceable retro console with 20 mid-90s games, but many of them don't hold up as well as you might have hoped, while other, better ones are conspicuously absent.

In many ways, the PlayStation Classic follows Nintendo's replica playbook page by page. It's an adorable miniaturized version of the original 1994 (1995 in the US) Sony console, down to its buttons, slots and vents. It's available Dec. 3 for $100.

But where the PS Classic stumbles has little to do with the hardware and everything to do about the games themselves. First off, there's the PAL/NTSC issue. For some reason we don't understand, nine of the 20 games in the Classic are presented in the international PAL video standard, which plays at an inherently slower refresh rate (50 Hz). Long story short, these titles will appear to have lower frame rates compared to their NTSC (60 Hz) counterparts when played on US TVs. (Here's how that plays out side-by-side.) Sony acknowledged the situation, telling us, "The North American and European PlayStation Classic has a mix of NTSC and PAL based games. We have no details beyond this to share." Too bad, though, if you're a fan of Tekken, which slows down the action just enough to be annoying.

Even on the games where that's not an issue, however, you realize that this collection of titles stretches the word "classic." Simply put, this wasn't really the golden age of console games. These first-gen PlayStation games don't seem to hold up as well as the 8- and 16-bit classics that predate them. The PlayStation represents a time in games in which the jump from 2D to true 3D was still shaking out. That transition resulted in a lot of rough-looking titles that by today's standards barely resemble anything cohesive onscreen.

That's not just me saying, "Oh, some of these original PlayStation games look like garbage now and are basically unplayable." OK, maybe that's a little bit of what I'm saying, but there's a reason we don't see indie developers lovingly paying homage to this time period. Most retro-inspired titles borrow aesthetics from the NES and SNES days, re-creating sprites within side-scrolling environments. What we don't see are retro games attempting to show off crude polygonal constructions with blurry textures and mosaiced backgrounds. That style just doesn't make sense now.

Not all of the 20 PlayStation Games included with the Classic suffer from this, but you'll find those that seem to hold up visually aren't attempting lofty 3D ambitions.

And that's fine. The PlayStation Classic feels more like a time capsule than a system you'd be relying on for daily gaming anyway. For what it's worth, many of the NES and SNES Classics out there are probably gathering dust, too, though the ability to modify those systems is also an attractive proposition. I don't know if the PS Classic can be hacked, but I'd bet it will be.

Watch this: Unboxing the PlayStation Classic
03:17 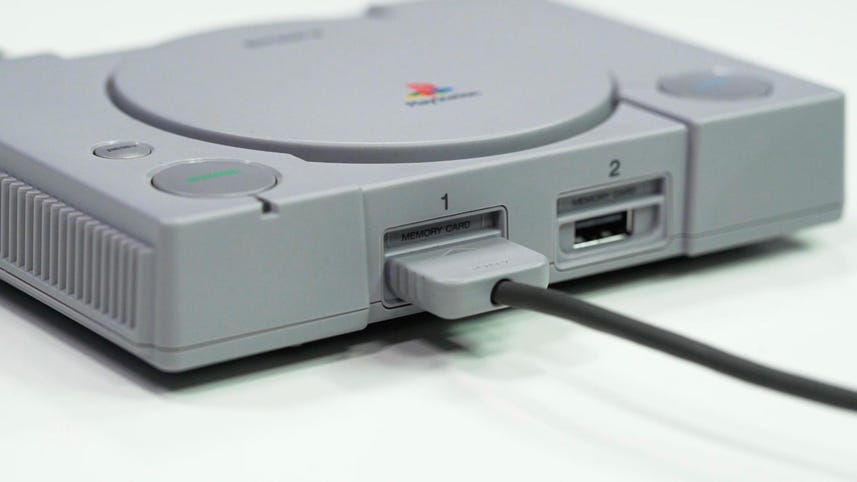 I owned a PlayStation and I have a fondness for about half of the games included with the Classic. There are some questionable choices here though. Why Twisted Metal I and not II? How is a Tony Hawk's Pro Skater game not here? (I guess that could be a music licensing issue.) Where are games like Silent Hill and Soul Reaver? And no Castlevania? I could go on.

That said, there are a small number of undeniable classics here. Metal Gear Solid, Final Fantasy VII and Resident Evil are all important games, but they're just not as enjoyable in 2018. Besides, Resident Evil has been remade and FFVII is getting a long-anticipated from-the-ground-up version as well.

It's a shame that Sony seems to have squandered a chance at improving the overall retro console experience too. There's no controller shortcut to jump back to the game selection screen. Instead you need to physically push the reset button, which also creates a save state. I just don't understand that omission.

Sony includes two original PlayStation controllers with the Classic, which is a nice touch, though their 4.5-foot wires feel a bit short. Plus, we all know a DualShock controller -- introduced a few years after the console first hit -- is how these games should be played. The lack of analog sticks is definitely noticeable here.

At $100, the Sony PlayStation Classic is far from a must-buy. If you have a fondness for the console, you'll likely find some pleasure in unearthing a few of these games, but it's tough to imagine their value as anything more than a novelty.

Now, let me know if a PS2 Classic is on the table -- then I'll be listening.

Full list of games included with the PlayStation Classic

Editors' note: Originally published Nov. 27. This review was updated Nov. 28 at 1:15 p.m. PT to include further testing regarding the inclusion of European/PAL versions of some games, and how that affects gameplay, along with Sony's statement on the matter. We've adjusted the "performance" and overall review scores accordingly.