Megan Wollerton covers renewable energy, climate change and other environmental topics for CNET. Before starting at CNET in 2013, she wrote for NBC Universal's DVICE (now SYFY). Megan has a master's degree from the University of Louisville and a bachelor's degree from Connecticut College, both in international relations. She is a board member of the Louisville chapter of the Society of Professional Journalists. When Megan isn't writing, she's planning far-flung adventures.

The most notable thing about these washers (and dryers) is their size. According to Samsung, these 5.6-cubic-foot capacity washers are large enough to tackle two king-size comforters in one cycle. Not only that, but Samsung made the washing machine drum larger and created something called SuperSpeed technology that cuts the wash cycle time down to 30 minutes.

I would be concerned about sacrificing thoroughness for speed, but Samsung seems to have that covered. The front-load washer has a PowerFoam feature that dissolves detergent in advance of the cleaning cycle to wash your clothes better and faster. And the top-load washer relies on AquaJet technology to release detergent and water simultaneously. That should allow the detergent to spread out evenly and quickly among the clothes.

The front-load models are 4 inches taller, so you don't have to bend over as far to add or remove your clothes. This washer and dryer comes with another interesting design feature, too; LEDs in the drums (presumably so you can see what you're doing better). The top-load model is also designed with you in mind -- it's wider and lower so you don't have to lean as far over to reach the clothing at the bottom of the drum. No word on pricing yet, but both the front-load and top-load pairs will be available in spring 2014. 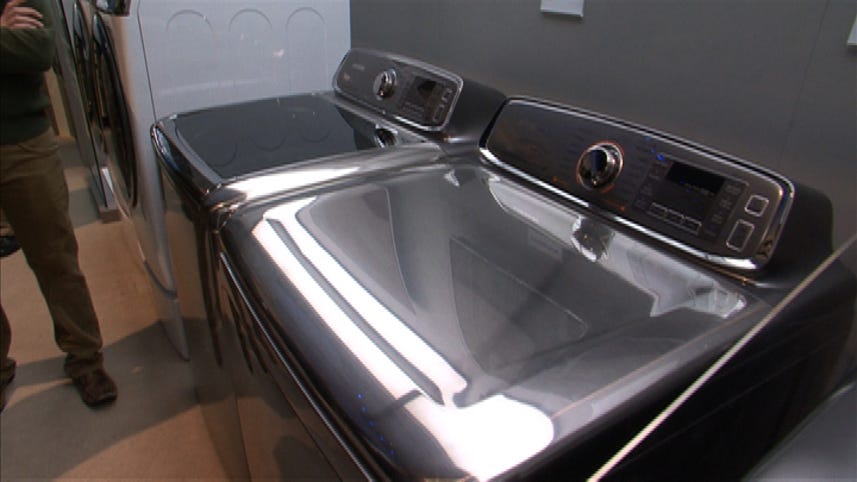 Samsung shares new high-capacity washers and dryers at CES
0:59
Watch Now
Get the best price on everything
Shop your favorite products and we’ll find the best deal with a single click. Designed to make shopping easier.
Add CNET Shopping