The Samsung NE58K9850WG has Wi-Fi, an insert that turns your single oven into a double unit, and a slick black stainless steel exterior. But are those extras enough to justify buying this mediocre cooker?

Ashlee spent time as a newspaper reporter, AmeriCorps VISTA and an employee at a healthcare company before she landed at CNET. She loves to eat, write and watch "Golden Girls" (preferably all three at the same time). The first two hobbies help her out as an appliance reviewer. The last one makes her an asset to trivia teams. Ashlee also created the blog, AshleeEats.com, where she writes about casual dining in Louisville, Kentucky.

I've gotta give it up for Samsung -- it knows how to make a bold statement in the kitchen. The Korean electronics juggernaut's large appliances first caught our eye in 2013 when we reviewed the Samsung NE58F9710WS and its Flex Duo insert, a feature that turned a single oven cavity into a double oven. Then the company added a virtual flame to its induction cooktops to help home cooks visually adjust to this electromagnetic method of cooking. And at CES 2016, Samsung introduced the world to its line of Wi-Fi-connected ranges that was supposed to let you control the oven and monitor the cooktop from an app.

The $3,099 Samsung NE58K9850WG has Wi-Fi, so you can control some of the oven's functions with a surprisingly responsive app. The range is also equipped with a Flex Duo insert that gives you double-oven capabilities, and it's all wrapped in a stylish black stainless steel finish.

The range's cooking performance is average at best, and the app can get finicky.

The Samsung NE58K9850WG will give you a lot of bragging rights and the upper hand on connected large kitchen appliances. But it would be worthwhile to wait and see if Samsung can get rid of its Wi-Fi kinks and put connectivity in a range that performs better.

One of those Wi-Fi ranges, the Samsung NE58K9850WG, lives up to much of the hype that I've come to expect from a Samsung kitchen appliance. The $3,099 range's wireless connectivity works better than I anticipated with Samsung's Smart Home app to give you a surprising amount of control over what happens in your oven. The range is a showpiece thanks to its unique black stainless steel finish, backlit knobs and slide-in design. And the Samsung NE58K9850WG comes with the Flex Duo insert and optional double door that provides even more versatility than when we first saw the insert in 2013.

Unfortunately, this is the part of the review at which I stop singing its praises. The range's cook times and test results were just OK, a lackluster assessment when you consider the powerful first impression this appliance makes. And even though the app is responsive once you're set up and actively using it, I had problems setting the app up, and it can get finicky if you've been away for a while. My lab tests revealed what the Samsung NE58K9850WG really is: 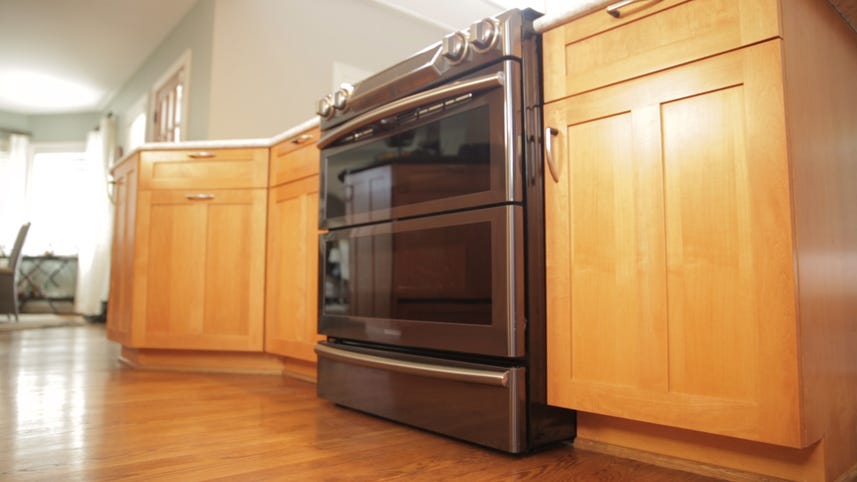 I'm sure folks who are chomping at the bit for the latest smart home appliances will be eager to buy this Samsung range. But Wi-Fi ovens are still a relatively new innovation that need some perfecting. Wait for Samsung to (hopefully) improve the performance of its Wi-Fi ranges and work out the app's kinks. Not brand-loyal to Samsung? Hold out to see how well the Whirlpool Smart Front Control Range performs when it debuts this year. And if you don't need Wi-Fi, consider similar slide-in electric models that have better cooking performance but no connectivity, such as the Samsung NE58H9970WS induction range or the KitchenAid KSEG950ESS slide-in range.

Stainless steel goes to the dark side

The Samsung NE58K9850WG's appearance lives up to what you'd expect from a $3,100 appliance. This is the first range I've tested with a black stainless steel finish, an option that brands such as KitchenAid, LG and GE have rolled out as an alternative to fingerprint-prone stainless steel. I still had to wipe away smudges during the course of testing the Samsung, but its dark finish made the range stand out in a test lab full of standard stainless steel.

Other than the finish, this electric range's appearance is similar to what we've come to expect in the above-$1,500 price category: a 30-inch-wide, slide-in model with burner knobs on the front of the unit (the better to show off your fancy backsplash) and a wide touchscreen panel that controls the oven. The burner knobs are surrounded by cool blue LED lights that make it easy to see at a glance which burner is in use, a nice touch that rounds out its high-end design.

As I mentioned earlier, the NE58K9850WG comes with a Flex Duo insert that you slide onto the oven's fifth rack position. This separates the oven into two separate cooking zones that you can set to different cooking modes and temperatures. The oven door is also hinged in the middle, so you can open just the top portion of the oven when the Flex Duo partition is in place. Overall, this is a great tool if you want the flexibility of double-oven cooking without a long-term commitment to a true double oven.

Samsung equipped the NE58K9850WG with Wi-Fi so you can use the brand's Smart Home app (available on iOS and Android) to remotely control some of the range's features. Overall, this was a useful tool, though it's not essential. You can set the oven's cook setting, temperature and cook times from the app. The app can monitor the temperature of your food if you use the connected probe that comes with the oven. And it will also recognize when the Flex Duo insert is in place, so you can control each oven cavity individually. You can easily see if you left a burner on too, though you can't control the cooktop from the app.

There are a few quirks that Samsung needs to work out before I can fully embrace this app. It was difficult to connect it to the range thanks to the sometimes conflicting directions in the app and the range's instruction manual. If I was inactive in the app and my phone went to sleep, the app would display an error message telling me to check the power cord and network connection, even though everything was connected.

And before you can send instructions from the app to your oven, you have to press the "Smart Control" button on the range's control panel. So if you didn't press the magic button before you went to work, but want to preheat the oven on your way home, you'll be SOL. Samsung said this is a safety feature, which is understandable, but it's pretty inconvenient for forgetful folks like me.

This range is just a so-so cooker

When it comes to ranges, price tags are often an indicator of unique features, expert craftsmanship and superior cooking. The higher the price, the better a range should cook. Unfortunately, the Samsung NE58K9850WG's cooking performance didn't match its $3,100 price and high-tech features. In most cases, this range was just average when I compared its cook times and performance to similar models. For example, take a look at how long it took the Samsung NE58K9850WG to broil six hamburger patties.

In other tests, it was a flat-out disappointment. When I compared it to other electric cooktops, the Samsung took the longest amount of time to boil 112 ounces of water.

The one bright spot in using this range was its baking performance. Biscuits on the same baking sheet cooked evenly during my double-rack convection tests, though the bottom racks of biscuits were considerably lighter than the biscuits that baked above them. I also got even results when I baked single racks of biscuits.

Samsung makes kitchen appliances that display the company's passion for technology and user-friendly design -- just check out its new smart refrigerator. The NE58K9850WG is no different from other Samsung products we've seen in this regard. This range is an ambitious attempt to add app connectivity to the kitchen, and I'm eager to see how this technology continues to develop. But its performance doesn't match its stellar upgrades. Samsung needs to get back to basics to create a range that cooks as well as it connects.