Shiny Galaxy Note 8 gets dual cameras, but plays it safe

Armed with top-shelf specs and a dual camera with portrait mode, Samsung prepares to battle the iPhone 8.

The Galaxy Note 8 has to wash away the bad taste of last year's battery-burning Note 7 double-recall. It has to outshoot every other phone with a set of dual cameras that's already out there. And finally, Samsung's highest-end phone needs to outshine the LG V30, Google Pixel 2 and iPhone 8, while also convincing buyers to choose it over the cheaper Galaxy S8 and Galaxy S8 Plus.

See what I mean? Tough work.

From what I've seen of the Note 8 so far, it stands a fighting chance at doing all three. The phone itself satisfies all the requirements of today's modern, high-powered handset, with its bright, 6.3-inch screen, twin rear cameras with portrait mode, a top-of-the-line-processor, wireless charging and water resistance. There's also external storage and its S Pen stylus has a handful of new tricks you can use to write, draw and navigate the screen. And did I mention the headset jack? There's one of those, too. (Nudge, nudge, iPhone 7.)

As the first new, (hopefully) safe Note since the Note 5 in 2015 -- remember, Samsung skipped the Note 6 name in favor of the Note 7 -- you'd expect the Note 8 to go big, silencing the naysayers and rewarding the fans. After all, Note buyers are the Samsung's biggest mobile cheerleaders, "the most energetic, engaged, loyal consumers," according to Justin Denison, a senior VP of product marketing and strategy at Samsung.

See the Galaxy Note 8 from every angle

Instead of splashing out, though, Samsung played it safe. The Note 8's battery is smaller than 2016's model, in part to keep from repeating last year's fatal mistake.

There are also a lot of carry-overs from the Galaxy Note 7 and Galaxy S8 that keep the Note 8 from feeling truly fresh. For example, the S Pen stylus only adds a few more tricks, none of which will set off industry shockwaves. (They're still fun, though. More on that below.) And then there's the awkward placement of that fingerprint sensor. Sorry, rumor junkies, it hasn't moved under the screen after all. Why Samsung chose to replicate the worst design shortfall of its earlier phone is beyond me; the Note 8 is a large phone that'll have you stretching for the sensor. Or else you'll give up and use a different way to unlock the phone and green-light Samsung Pay.

The twin rear cameras are the only major feature that's truly new, and they're a first for any Samsung phone. But dual cameras are now so common in high-end handsets that they've quickly become the norm. Samsung's implementation, however, is really promising, and it takes Apple's Portrait Mode to the next level. That's tentatively a notch in Samsung's belt. (And again, much more on this below.)

I can't wait to fully test the Galaxy Note 8's new twin cameras, battery life and hidden tricks. At first glance, it's an attractive, fully featured device for power users who are looking for the ultimate in handheld computing. In a lot of ways, the Note 8 is the Galaxy Note 7 we should have had, but with a modern camera experience that promises something extra.

There's just one final sticking point, and that's price. The Note series is typically Samsung's costliest phone, an expense that Samsung justifies with the most cutting-edge features and a heap of stylus tricks. This could work in Samsung's favor if the iPhone 8, Google Pixel 2 and LG V30 also cost a bundle. Or, the relatively high price could backfire if more buyers go for the Galaxy S8 Plus instead. Sure, the S8 Plus has only one rear camera and no stylus, but it's otherwise about the same, for a little less cash.

Read on for a breakdown of the Galaxy Note 8's specs, and photo-taking capabilities and S Pen features. For a full comparison with today's top phones, skip to the end.

And remember, our final verdict on whether the Note 8 is worth the price will come after we've received a review unit and had a chance to fully test the phone.

Note 8 price and when to buy

Absolutely excellent news for original Note 7 owners: Samsung will grant a discount on the Note 8 as an apology for the hassle of having returned your last phone. The big catch? This is currently for US customers only. It's a good start, and one we hope Samsung will extend to other affected buyers worldwide.

Note 7 owners who go to Samsung.com will receive an instant trade-in value of up to $425 (about £330 or $AU540) when you upgrade your current phone for a Galaxy Note 8. It's gratifying to see Samsung make good with 2016's endangered, inconvenienced buyers. Moreover, it's the final step Samsung needed to take to finally put the Note 7 disaster to rest.

Preorders start Aug. 24, and the phone goes on sale Sept. 15 in the US, UK, South Korea and other select countries. It'll roll out globally through October.

All US buyers who preorder the phone will get a fast wireless charger and a 128GB microSD card or a Gear 360. This has nothing to do with being a Note 7 owner, it's available to everyone. More details here.

You'll be able to buy the phone through carriers, Samsung.com and other retailers. Samsung is also doing something different and immediately selling the Galaxy Note 8 unlocked rather than waiting weeks or months to offer an unlocked option.

Is the Note 8 battery safe?

If you were burned by the Galaxy Note 7 flame-out, you might be a little gunshy about the Note 8.

Here's what Samsung's done to help cool your fears:

Of course, we won't know for certain if any phone battery is faulty until users' reports come in. For the record, there have not been similar widespread reports of problems with the Galaxy S8 and S8 Plus batteries. However, if you're wary, it doesn't hurt to watch and wait.

Portrait mode is the major use case here. This applies a softly blurred background around the subject (which itself is in focus), like an aura of mystique that makes the person or thing pop out.

Samsung calls it Live Focus, and it lets you do more than you can on other phones with similar modes, including the iPhone 7 Plus, which popularized the feature.

You won't see these on the Galaxy S8, or any other phone for that matter.

This creates an animated GIF of a handwritten note, which is written back in real time. You can add photo backgrounds to create your own personal meme. What stands out here is that you can share these on any app that supports animated GIFs, so Facebook Messenger, for example, or WhatsApp.

On the Note 8, you can create a Live Message from the Air Command navigation wheel (which you see when you pull the S Pen from its holster) and from the keyboard, if you hold down the custom key and find the Live Message option. 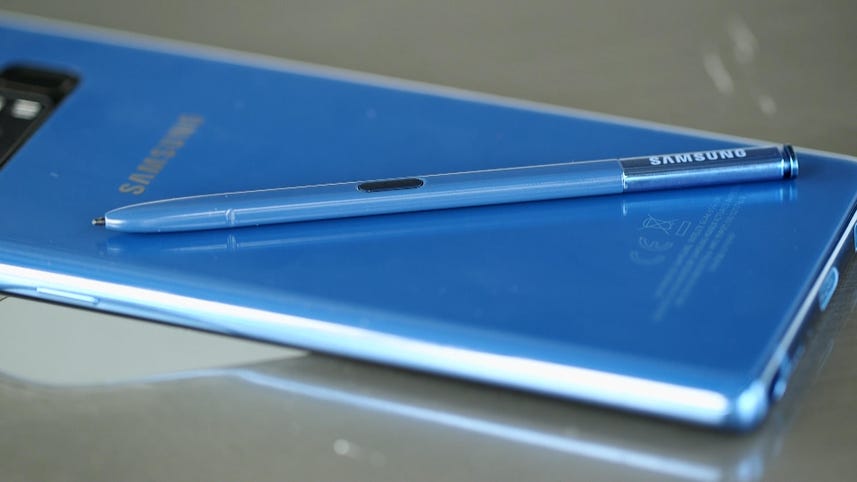 Write on the lock screen

Screen-off Memo was introduced on the Note 7. It lets you scribble on the screen without having to unlock the phone, and it's pretty great. You can pin a note to the always-on display, and now you can save it and pin again to lengthen the list and create up to 100 pages. You can still transcribe pages if you save them to your Notes app.

If you find yourself constantly using the same two apps in split screen mode, the Note 8 gives you an option to link them together and open them both with a tap. Say, for example, YouTube and your internet browser, or Google Maps and music.

It's called App Pair. You start by pulling out the tab on the edge of the screen, and swipe to get to the app shortcuts. Samsung says it will start you off with one or two pairings, but you can also link your own apps in settings. Then when you're ready to use them, a tap on the app pair icon loads them both in split screen mode.

You used to have to translate in foreign languages a word at a time -- say by selecting words on a foreign-language website with the S Pen. But now you can click an entire sentence and translate it all at once. The expanded feature works for over 70 languages and uses Google Translate. The tool also converts currency.

Sorry, US buyers, you won't get blue or gold colors at launch; you get your choice of black and gray. It's possible Samsung will release a new shade down the road.