The Samsung Galaxy Note 3 fights back at plastic flak with a new leather-and-stitching look -- and more multitasking.

See all prices
$77 at Amazon
Watch this: The gigantic Samsung Galaxy Note 3
02:57 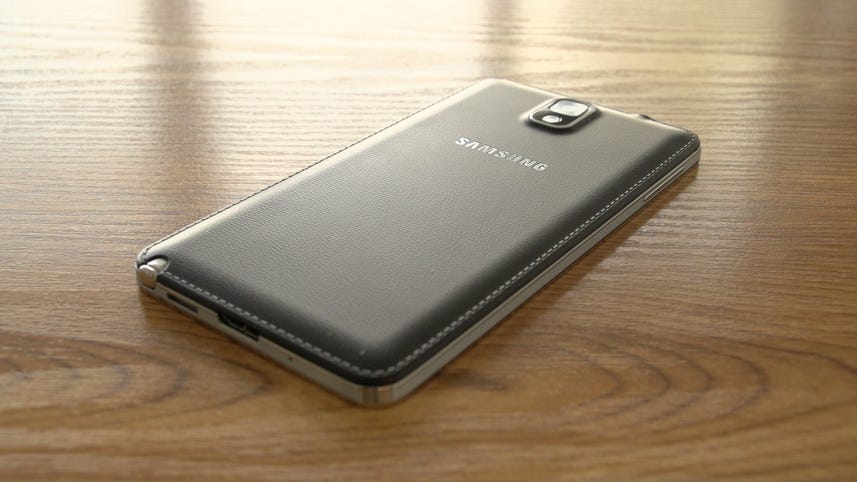 BERLIN -- Samsung reckons people buy the Galaxy Note for the big screen, but stick around for the multitasking and S Pen features. So the Samsung Galaxy Note 3 has beefed up both, bursting with new ways to bring your handwritten notes to life, and new ways to use two -- or more -- apps at the same time.

The original Note was the first to bridge the gap between phone and tablet, heralding today's ballooning sizes of smartphone. Like previous Notes, the new Note 3 was unveiled at technology trade show IFA in Berlin, alongside the Samsung Galaxy Gear smartwatch and a 10.1-inch Galaxy Note 10.1.

The Note 3 has been confirmed for US carriers AT&T, Sprint, Verizon, US Cellular, and T-Mobile, and will hit shops on 25 September in more than 140 countries. It'll emerge for the rest of the world come October.

Bigger but lighter
The Note 3 sports a 5.7-inch, full high-definition screen, a slight boost from the Note 2's 5.5-inch display. But despite the bigger screen, the Note 3 is thinner and lighter, measuring 8.3mm and weighing just 168g. It's easy to hold in one hand -- in terms of weight, anyway; you can't work the screen with one hand unless you're the hitchhiker with the massive thumbs from that Uma Thurman film.

The screen is as bright, colourful, and responsive as we've come to expect. You can do everything with your fingertip, as on most tablets, but the S Pen stylus gives you even finer control.

Under that slablike screen is a beefy 2.3GHz processor with a whopping 3GB of RAM. All that power harnessed to a giant screen could empty the tank with alarming alacrity, but a 3,200mAh battery is there to ensure there's plenty of grunt left when you need it.

And the Note has plenty of speed, too: it has 4G LTE for connecting to the Internet at high speeds, with support for the fastest category 4 4G.

Around back is a 13-megapixel camera with LED flash. It's set in a textured, leather-effect rear edged in fake stitching. Perhaps stung by the criticism aimed at the cheap-looking glossy plastic of the Galaxy S4 and its ilk, Samsung is obviously going for the premium look of an expensive wallet, and, coupled with the classy metal rim, it actually works.

Still, I can't help but smile at the timing: Samsung's fierce rival Apple has just ditched stitching from its iOS software because it looked dated.

This chart details a full list of Galaxy Note 3 specs, and how the device compares with the Note 2.

S Pen
The distinguishing feature of the Note family is the S Pen, a dinky stylus stowed away in the bottom of the phablet. The Note 3 expands upon the S Pen's capabilities, making it more than an unnecessary accessory strictly for any old-timers who haven't yet figured out touch screens.

As soon as you unsheathe the S Pen from its cubbyhole, the Air Command wheel appears on screen, floating on top of the app or home screen. You can also call it up beholding the S Pen hovering over the screen and clicking the button on the side of the stylus. The onscreen wheel includes icons that give you shortcuts to assorted clever features that use the stylus.

The most basic use for the S Pen is to scrawl a note or memo; but those notes and memos can then spring to life. Say you meet a pretty young thing at your pilates class and end up jotting down digits. After waiting the requisite three days -- don't want to look too keen -- you can call your new friend by drawing a box around the scribbled number and hitting the call icon.

It's not as smooth as I'd like, though. Hitting the call icon launches the dialer with the number in it, whereupon you have to hit call again. Clever as this is, there's still a screen press or two too many, which might put you off your seductive chat once you do get through to your potential new love interest.

You can also bring to life addresses, links, or e-mail addresses that you've written down, by once again drawing a box around them and hitting the relevant icon to open the maps, e-mail, or browser apps.

Also on the Air Command wheel is an option to save snippets to a Scrapbook app. Draw a box around something you want to save, whether it's part of a Web page, an image, some text, or a YouTube video, and it's saved to the app. You can add your own tags or handwritten notes to each snippet, and later edit the saved text or open the Web page again.

The Scrapbook app syncs across Samsung devices, but unlike Evernote you can't access it online. Seeing as there's already an Evernote Android app, you might as well install that.

With the S Finder you can search your Note 3, looking not only for files, music, and photos by name but also by date or tags. And you can search handwritten notes, even for hand-drawn symbols like a star.

Type in a location, such as London, and S Finder will not only sniff out anything with the word London in it, but will ferret through your geotagged photos to find any snaps taken in London. You can refine the search by the past seven days, the past month or year, or other filters such as keywords.

More multitasking
A bigger screen means more room for movies and games. That's all very well, but previous Notes came up with a next-level use for a big screen: simultaneous multitasking. When you've got all that leg room, why stop at one app when you can use two at the same time?

Instead, just use the S Pen to select what you want -- some text, a link, a phone number, or whatever -- and slide it neatly to the other app.

You can grab the dividing line between the two apps and slide it about to choose how much space each app takes up. And you can even split one app in half to use the same app in two windows.

For example, why not have two separate browser windows open at the same time to compare information? Or two separate chat windows, to chat with two different people behind each others' backs? Just whatever you do, don't mix up which one's which.

If there's a pair of apps you often need to bring together, you can save them for quick access in future. And there's no limit to how many of these combinations the Note 3 remembers.

More than one app multitasking
But why stop at two apps? Sometimes you want to use an app very quickly without disturbing your main app. So selected apps can be called up to quickly float over your main app then be just as quickly pushed to one side, waiting to be called on again. The clever part is, you can have as many of these quick apps open or minimised at one time as you'd like.

These quick access apps include the calculator, phone dialer, and the YouTube app. Grab your S Pen, call up the Air Command wheel, and select the option to call up one of the quick apps. Then draw a box or just a line where you want the app to appear -- any size, and anywhere on the screen.

Say you're browsing the Web and you see some numbers you need to crunch. Draw a box to open the calculator or phone app and do a quick sum or make a quick call from the numbers in your main app. If you're done with the quick app but think you may need it again, just minimise it.

It then becomes a small round icon floating above the screen, ready to be moved unceremoniously around, opened again for more speedy calculations, or closed -- exactly like the Facebook's Chat Heads, now I come to think of it, only with apps instead of old friends who post too many baby photos.

Take Note
As phones get bigger and tablets get more ubiquitous, it's good to see a device do something different that actually justifies the increased size. The Samsung Galaxy Note 3's multitasking features are particularly well-thought-out -- but whether you think it looks good in leather is up to you.