This slick Samsung refrigerator is one of our new high-end favorites, but it's priced more like a midrange model.

Last year's fridges are often this year's bargains. Case in point: the Samsung RF28JBEDBSG. Clad in a classy black stainless-steel finish, it's a modern-looking French door model with compelling features and terrific performance. And, while it was originally priced at $3,700, you can pick one up right now at major retailers like Best Buy and Home Depot for a very reasonable $2,500.

The slick-looking Samsung RF28JBEDBSG was a strong, steady performer in our tests -- especially the luxurious "FlexZone Drawer" and its four dedicated temperature presets. The "Food Showcase" compartment did a better job at holding cold temperatures than competing door-in-a-door models.

There's no evidence that the Food Showcase compartment has any positive impact on performance, and its overall convenience is questionable at best. The ice maker also takes up too much room inside of the fridge.

With an average sale price well below $3,000, this likable, luxurious fridge is a legitimate bargain.

Simply put, there really isn't much I don't like about this fridge. Yes, I continue to question whether door-in-a-door features like Food Showcase are anything but a gimmick, and I've made my aversion to Samsung's clunky ice maker design perfectly clear. But at $2,500 -- or at any sale price below $3,000, really -- I'll still recommend it without reservation for anyone in the market for a kitchen that's a little more modern and luxurious.

This fancy Samsung fridge costs less than you might think

Refrigerators are evolving. Competition at the high end is fiercer than ever, and smart fridges continue to trend towards norm and away from exception (LG's even making Wi-Fi a standard feature across every refrigerator it sells). In that landscape, the RF28JBEDBSG sits short of the cutting edge. There's no Wi-Fi here, no radically unique design, and no ginormous touchscreen in the door, either.

But this is still a very nice refrigerator, and one that falls right into a happy, modern medium between entry-level luxury and high-end smarts. It makes excellent use of black stainless steel, and it offers both a door-in-a-door "Food Showcase" compartment and a dedicated "FlexZone Drawer" with its own distinct temperature presets. It's got more than enough going for it to get you excited about adding it to your kitchen.

Open it up, and you'll find a total of 27.8 cubic feet of storage space, and while that's not quite enough to call this thing king-size, that's still plenty of room for a family's worth of groceries. In my tests, I had no trouble fitting our entire load of test groceries inside, complete with room to spare for our bulky, large stress-test items. If you need to cram a cake or a leftover pizza into this thing alongside your groceries, you shouldn't have much trouble.

The refrigerator's two movable shelves -- one that slides in and a second that folds up and out of the way -- are a nice touch here, helping make room for tall items on the shelves below. The FlexZone Drawer makes an impact, too, adding an extra 3.8 cubic feet of room for groceries in addition to the 15.7 cubic feet you already get in the fridge.

Watch this: What the heck is this shelf in Samsung's fridges for?
02:19 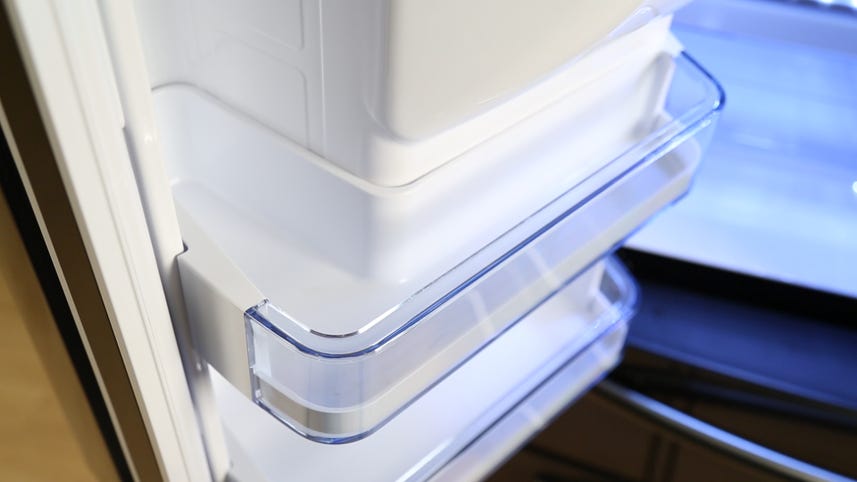 What the heck is this shelf in Samsung's fridges for?
2:19
Watch Now

Still, it isn't a perfect design. My main gripe? The ice maker, or "Ice Master," to borrow Samsung's branding. It sits up on the top shelf, eating up a little over a half cubic foot of precious space. When you need it to dispense a couple of cubes, it'll drop them down through an angled chute in the door. That chute blocks off the door's narrow, poorly designed middle shelf, wasting even more space. Packing the ice maker entirely into the door, like LG and GE have figured out how to do, would free up that space on the top shelf and make that door shelf easier to use.

The other key feature is obviously the titular Food Showcase design. All it really does is let you pull a little trigger on the right door handle to open the door's front panel without opening the door itself. That lets you access thinks like drinks, condiments, and butter from the in-door shelves without actually opening the fridge. The compartment's bottom shelf also slides out like a drawer, which is a nice, new touch.

I've long been skeptical of these kinds of door-in-a-door compartments, but the one in this fridge is at least easier to use than competing models from LG that inexplicably block off those in-door shelves from the inside. And I might be in the minority here, given that door-in-a-door compartments are an increasingly popular feature (both GE and Whirlpool are introducing models with the feature this year).

I spent nearly a month testing the RF28JBEDBSG, and it passed with flying colors. Temperatures throughout the fridge were steady and accurate, save for one very slight hot-spot in the bottom left door shelf.

The real surprise was the performance from the right door's shelves, though, the ones that sit inside that Food Showcase door. With almost every door-in-a-door fridge I've tested, temperatures in those in-door shelves tend to run warm -- and usually above 40 degrees F, a benchmark for food safety set by the FDA. That wasn't the case with this Samsung fridge, though. At the default, 37-degree setting, all three shelves averaged out below 40 degrees -- a terrific result.

That said, don't expect Food Showcase to have any sort of impact on this refrigerator's cooling power. Manufacturers have touted door-in-a-door compartments as an energy saving feature since we first started seeing them a few years ago, but our testing doesn't bear that claim out. To be specific, I ran my 72-hour, 37-degree test for a second time, but replaced the regularly scheduled refrigerator door openings that simulate normal usage with Food Showcase door openings. In other words, I only used the Food Showcase door for three days to see whether or not my results would improve.

They didn't. In fact, the Food Showcase shelves actually came back slightly warmer than the first test (probably because opening the Food Showcase door exposes them directly to the outside air of our climate-controlled test chamber). The rest of the fridge all stayed within one percent or so of the original averages, and the data didn't show that the fridge was working less hard than before, either. So no, Food Showcase does not factor into the way this fridge performs.

As for the freezer, it sat steady just a degree or two above 0 F throughout all of our tests, which is right where you want it. Its defrost cycles never sent it any higher than 15 F, and it was always able to bring the temperature right back down to the target.

The true performance standout might be that FlexZone Drawer, though. After my initial testing was complete, I ran an additional four-day test at the default 37-degree setting. I started the FlexZone Drawer off at its warmest setting (42 degrees), then dialed it down one setting at a time every 24 hours. The goal was to see how accurate each setting was, and how quickly the drawer could change from one setting to the next.

It did an outstanding job. Temperature shifts never took more than three hours or so, which is excellent, and each setting offered steady and distinct performance. The top three all erred about two or three degrees on the warm side, but that's not a disqualifier by any stretch (especially at the 33-degree setting, where you want things cold but not frozen). And at the coldest setting (29 degrees), the drawer knocked it out of the park, as far as accuracy goes.

The FlexZone Drawer easily clears the performance threshold needed to be one of this refrigerator's top selling points. It also reinforces the notion that if you want your next refrigerator to include an adjustable temp drawer like this one, then you're much better off spending some extra cash on a model that keeps that drawer separate from the main body of the fridge. Our testing consistently shows that performance tends to plummet when those drawers sit inside of the fridge.

The RF28JBEDBSG is a great-looking refrigerator with very solid performance and compelling features -- particularly that FlexZone Drawer, which nailed it in our tests. Best of all, you can currently get it for well under $3,000, which is a steal as far as I'm concerned. If I currently needed a new fridge, or was looking for an upgrade, this might very well be the one that I'd go with.