With a single (fast) shot, this camera takes full spherical images and, with some help from an app, lets you zoom, swipe, and rotate them.

See all prices
$355 at Amazon
Watch this: Ricoh's Theta captures the world around you in one shot
01:39 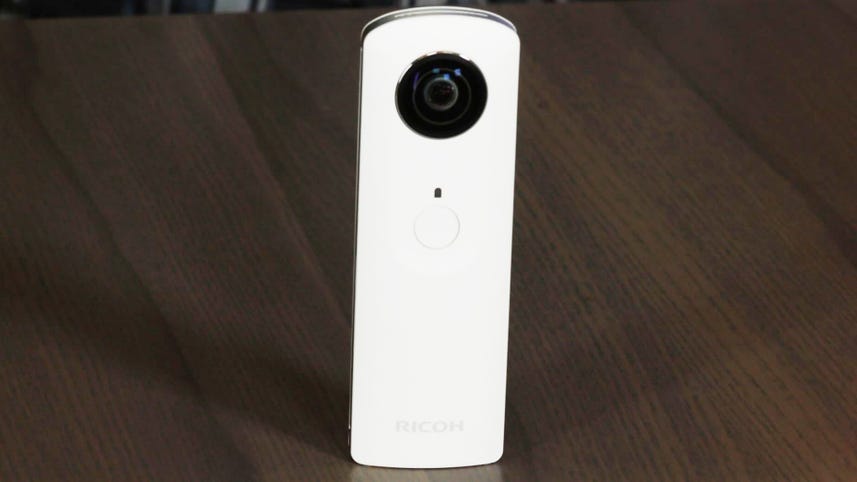 Ricoh's Theta captures the world around you in one shot
1:39
Watch Now

Taking and sharing panoramic photos -- either with a smartphone or camera -- has become pretty popular. Getting a wider view of your surroundings can lead to some breathtaking pictures depending on your scenery. The Ricoh Theta, however, can add some interest to even boring scenes.

With a single press of the shutter release, the Theta's proprietary ultra-small twin-lens optical system captures the entire scene around you -- top to bottom -- in one shot, creating fully spherical images.

The imaging device looks like some sort of sci-fi device. Press the shutter release and the camera even emits a sci-fi-ish bleep.

Images are quickly stored to its 4GB of internal memory that can hold up to 1,200 shots. The Theta's battery is built-in, too, lasting for up to 200 images on a single charge. There's a Micro-USB port on the bottom for charging and transferring images off the device.

Ricoh Theta lets you spin through the world around you (pictures)

There are only three buttons total on the Theta: power, shutter release, and Wi-Fi. The Theta directly connects wirelessly via Wi-Fi to an iPhone 4S or 5 or 4th or 5th gen iPod touch models; Android support is expected by the end of the year. Not only does this give you a way to view and interact with images, but acts as a remote shutter release.

What gets stored on the camera is a JPEG, such as the one above. It's completely unfolded, though, and you need software to interact with the image. That's where the app comes in.

Once the images are on your device, you can manipulate them with your fingers. Zoom in and out, swipe through them and send them spinning, or rotate them to see the sky above or ground below. Images can also be viewed with a desktop app available for Mac or Windows.

Shots can be uploaded to Ricoh's dedicated Theta site as well, and from there shared on Facebook, Twitter, and Tumblr and on Microsoft's Photosynth and Bing Maps sites. The desktop app can also be used for sharing and firmware updates.

The fact that Ricoh mentions firmware updates gives me hope that it will someday do more. Like Lytro's camera when it was first launched, the Theta does only one thing. Lytro has added a lot of functionality to its camera through frequent software updates, so maybe Ricoh plans to do the same. At its IFA 2013 press conference for the Theta, Ricoh said it is concentrating on still images for now, but things such as streaming and video were possible in the future.

Everyone I showed the Theta and its results to agreed that it was cool and the images are mesmerizing. And the fact that it took no effort to get shots they'd want to share was a plus, too. However, whenever I mentioned price, the excitement quickly faded.

When the Ricoh Theta becomes available in October, it will sell for $399. Ricoh says $400 is a consumer-friendly price, and it might be considering all the technology involved. But it's $200 to $300 more than what everyone I showed it to said they'd be willing to pay for it.