Star Wars Battle Quads are the drones you're looking for

See all prices
$67 at Walmart

Your squadron has been wiped out, and your battered X-wing fighter is the Rebel Alliance's last hope. As you desperately swoop and streak through space, screaming out of the stars comes Darth Vader in his TIE Advanced fighter, lasers blasting... Until you use the Force to flip your X-wing in a daring corkscrew roll and blast the Sith Lord out of the sky. Pew-pew!

"Good shot, kid! Now come inside, it's time for your dinner."

If you've ever wanted to graduate from bored moisture farmer to epic space pilot, now's your chance. The Star Wars Battle Quads from Propel are remote-control quadcopter drones that challenge each other in glorious recreations of the dogfights from George Lucas' classic movies.

Originally launched in late 2016 in small quantities, they're back for 2017 at the slightly lower price of $180 (roughly £140 or AU$230) each, with an even cheaper version of the X-wing coming soon. Also new is an updated companion app that keeps track of your scores as you fight other Quads, and offers a flight simulator with training missions you can play before you risk your drone.

Choose from a rebel T-65 X-wing Star Fighter, Darth Vader's Imperial TIE Advanced x1 or a 74-Z speeder bike from "Return of the Jedi", complete with Imperial Scout Trooper figure to ride it. They're on sale now, with a Millennium Falcon model expected to land some time around the "Han Solo" movie in summer 2018.

The models look perfect, hand-painted and packed with detail. There are some compromises to drone flight, such as vents in the TIE fighter's wings and the little front legs required to hold the rotors. But the rotor blades are transparent and the vents are cleverly incorporated into the design, leaving the drones looking pleasingly like their on-screen counterparts while they're in motion.

Fly to a galaxy far, fay away with the Star Wars Battle Quads

What really sells the Star Wars-iness is the sound. Above the high-pitched whirr of the drones, your controller plays sounds, music and quotes from the movies that take you right into the famous space battle scenes.

The snippets of dialogue react to the action with phrases such as "Stay on target," "I can't shake him!" and "Good shot kid!" The music and sound effects help to really draw you into the Star Wars universe. The signature laser-blast "pew-pew!" noises are the absolute best. Each vehicle has a different soundtrack and dialogue clips.

The Easter eggs keep on coming: The small screwdriver required to install the batteries is shaped like a tiny lightsaber.

The attention to detail even extends to the packaging of the Collectors' Editions. When you open a box, it lights up and plays music from the films.

A cheaper Standard Edition of the X-wing is also coming soon to a wider range of stores, and which just comes in regular packaging. While you miss out on the cool box, it does mean you're more likely to be actually afford multiple drones and actually have one of those epic space battles.

The drones fire lasers at each other when battling. Up to 12 drones can fight each other at once. They interact with each other, counting down how many lives you have left when you're hit.

You have three lives, and when you're hit a third time the drone falls from the sky. They'll even tell you if another drone is running short of lives so you know who to target.

Each Battle Quad goes from 0-35 mph in three seconds, topping out at 40 mph.

As well as swooping and speeding around in the sky, the drones can pull off nifty corkscrew rolls. Touch the shoulder buttons on the controller and the drone will flip right over.

You'll get 6 to 8 minutes of flight from one charge. Rechargeable batteries are included.

There are a couple of training options if you're new to drone flying. You can set a height ceiling so your drone can't shoot off and disappear or fly over a fence. Or you can learn to fly without actually taking to the sky, with a simulator app game that you play using the actual controller to steer a digital version of the drone on your phone's screen. The app walks you through various missions teaching you new maneuvers like banking or figure 8s, and replicates the slightly bouncy real-world movement of the actual drones in a backdrop of locations from the movies. As you progress through the missions you can shoot up the ranks of the Rebel Alliance or Imperial forces, and when you start battling in real life you'll earn points that count towards a global leaderboard of other drone pilots.

You'll be bullseyeing womp rats in no time -- but don't get cocky. 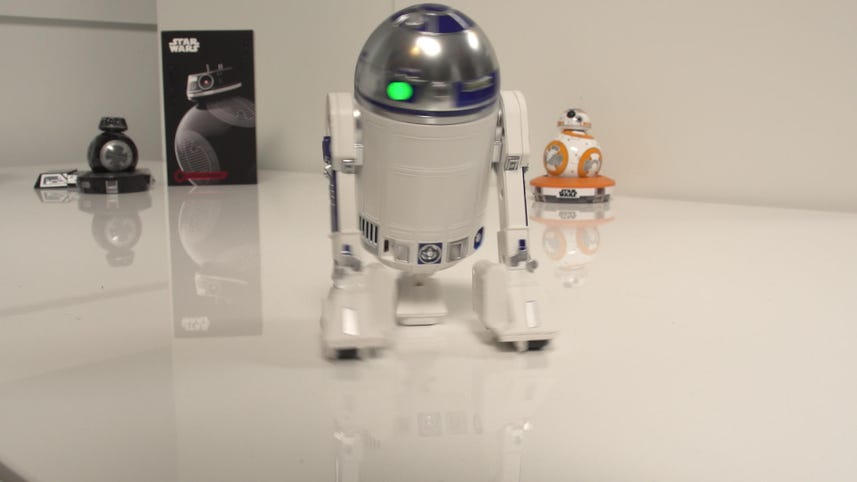