Joshua Goldman is a senior editor for CNET Reviews, covering laptops and the occasional action cam or drone and related accessories. He has been writing about and reviewing consumer technology and software since 2000.

There are several options when it comes to capturing hands-free point-of-view video (POV), but most of them require mounting a camera to your head. In the case of the Pivothead video-recording glasses, though, it's as simple as, you guessed it, putting on a pair of glasses.

The Durango design isn't for everyone and while the video quality is very good for this type of device, it might not be good enough for some considering its $350 price.

Smack dab between the eyes of the glasses is a lens with an 8-megapixel Sony CMOS sensor behind it capable of capturing full HD MP4 format video at 30 frames per second as well as 8-megapixel stills. And since the storage, battery, and controls are all built into the glasses, there's no extra bits to worry about. Just put them on and start shooting.

While that is very freeing, when it comes time to record whatever activity you're doing, the self-contained nature of the glasses means you're definitely working with some limitations.

Design
The Pivothead Durango glasses I tested look a whole hell of a lot like a pair of Oakley Gascan sunglasses. If it's not your style, there are three other models and 16 styles in all, but one's more sporty than the next. A couple of the models come with interchangeable lenses and the Durango can be fit with prescription lenses.

Basically, if you don't like sporty-looking sunglasses, these aren't for you. Frankly, you're probably not going to be wearing these for aesthetics, what with the camera lens front and center, and, while I'm sure you can come up with other use cases for them, they're pretty much designed for sports.

The frames are coated with a matte black rubber that gave them some grip when wearing them. The Durango lenses are impact resistant (ANSI Z80.3), but Pivothead doesn't make any durability claims beyond that. The hinges seem fairly tough, though, and the frames are flexible so they don't feel like they'll easily snap. However, simply twisting them a little was enough to pop up the frame piece covering the back of the camera module on our early production glasses. Basically, they can probably take a bit of rough treatment, but they're by no means sealed up tight.

As for controls, there's just the rocker switch on top of the left arm, a power button on its underside (next to a covered Micro-USB port), and that's it. Press forward on the rocker to record video and press back to take a snapshot. Pressing and holding each of these separately for four seconds lets you cycle through focus modes and recording resolutions.

There are three LEDs on the inside of the left arm to give you a visual cue when you're recording, changing settings, or charging. Of course, once the glasses are on, these are impossible to see, and a few times when testing I was recording when I didn't know it, and not recording when I thought I was. Unfortunately, I'm not sure there's a better location for them, except for maybe above a lens.

Features
Out of the box, the glasses are set to record video at a resolution of 1080p at 30 frames per second and capture photos at 8 megapixels. The glasses default to fixed focus, which sets the focus to an intermediate point so everything in your scene is for the most part in focus. This, again, can be changed by pressing and holding the back rocker switch; the other options are continuous AF that will continue to adjust focus as your subject or head move around and a regular AF that focuses on whatever you're looking at when you press record.

You can also change the resolution to 720p60 or 720p30 by pressing and holding the front of the rocker switch. The camera is capable of much more, though to change the settings you'll need to install a piece of software on a computer and connect the glasses over USB. (Apps for doing this with iOS and Android devices are in development as is live streaming.)

The camera's photo options are more plentiful than I initially thought, giving you settings for time-lapse photos and burst capture, and macro photos for subjects that are closer than 3.5 feet. However, without a viewfinder of any kind, you'll have to do a lot of experimenting to learn the limits of everything in order to get the shot you're after. That goes for photos and video.

Everything gets recorded to 8GB of internal flash memory; it can hold up to an hour of 1080p30 movies. The battery is also good for about an hour of continuous recording and takes about two hours to fully charge again.

To get your shots off the camera, you'll need to connect the glasses to a computer or pick up an Air Pivothead, a $99 2-by-2-inch battery-powered box with a Wi-Fi radio and SD card slot. It can be used to wirelessly view and transfer stuff off the glasses or offload to an SD card as well as charge the glasses up. 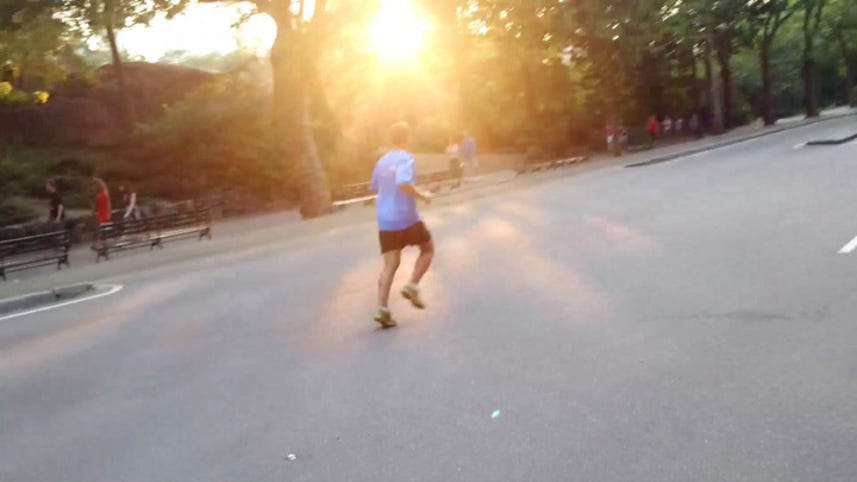 Video quality
When showing the video to some friends and co-workers, the response I got was "not bad," which pretty well sums it up. The 1080p30 video (recorded at approximately 14Mbps) is very good, on par with a minicamcorder like the GoPro, higher-end smartphone, or entry-level full-size HD camcorder. You won't mistake it for video from a high-end consumer or professional camcorder, but for posting clips to share online, the results are fine. Well, for the most part.

Any video shot with the glasses while moving is subject to wobble and skew from rolling shutter, which is typical for this type of camera. Panning your head around results in judder and moving subjects generally have ghosting. Again, typical of this type of camera, but it doesn't make it any easier to watch. The Pivothead's 720p60 setting smooths out fast-moving subjects some, but it costs you some detail.

Shooting while stationary you can get some very nice video, and in general detail and color in good lighting are very good. Exposure adjusts smoothly, but somewhat slowly when lighting changes, which pretty much happens all the time when you're moving. Low-light video is loaded with noise and artifacts and loss of detail, however with these being sunglasses you probably won't be shooting too much at night or indoors.

The mono mic built into the frame is good enough to capture the wearer's voice, but everything else will need to be really close, loud, or both. Wind noise can also be a problem (as you can hear at the end of the video above).

Conclusion: Recommended with reservations
The biggest benefit to Pivothead's glasses is that you can just pop them on and start recording. There are no mounts or other equipment needed and they're lightweight so they won't get in the way of what you're doing. However, considering the $350 price, that convenience might be too easily overlooked for some users when viewing its video quality.