The Optoma HD142X projector spits out wall-filling swaths of full-HD resolution for less than the cost of a decent 50-inch TV.

The Optoma HD142X, at $550, is one of the least-expensive true high-definition projectors available, but the picture looks better than you might expect for the price. This little black box filled the massive 120-inch screen in CNET's test lab with no problem, throwing up an image as detailed and accurate as any midrange TV. Except ginormous, and infinitely more impressive as a result.

The Optoma HD142X has very good overall image quality with full-HD resolution, solid contrast and accurate color. It's one of the least expensive projectors available for this level of quality.

The Optoma HD142X has an image so good, it'll be tough for price-conscious home theater fans to justify paying more for a projector.

The Optoma's picture handily outdid the cheaper non-HD projectors I've tested recently, and kept up very well with the more expensive competition, too. So well, in fact, that its low price point already begins triggering noticeably diminishing returns. Higher-end units like the BenQ HT2050 ($800), for example, did turn in slightly better performances in some areas, but the differences would be tough for many viewers to appreciate. To get a truly substantial leap in image quality, you'll have to pay a lot more.

That leaves entry-level full HD competitors like the Viewsonic PJD7828HDL and the BenQ W1070, both of which cost a bit more than the Optoma at around $580. Its picture is as good or better overall than either one, making it the best value I've tested yet among 1080p projectors. For limited-size rooms I'd recommend the shorter-throw Viewsonic, but the Optoma is my favorite overall at this price.

Beyond 1080p resolution, the HD142X is as bare-bones as you'd expect for the price. Its lumens rating and tested light output fall short of both the Viewsonic PJD7828HDL and the Epson Home Cinema 640, but it's still plenty bright for the dim (or preferably completely dark) room you should be watching in. The Optoma is also among the smallest 1080p projectors at just 11.7 by 9 by 3.8 inches (WHD).

A manual zoom to make positioning easier, although its range is relatively narrow and, like most budget projectors, there's no lens shift. This is not a short-throw projector, so if your situation calls for as large an image as possible in a small room, the Viewsonic PJD7828HDL is a better bet.

If you want to use 3D with the Optoma you'll need to buy 3D glasses. The projector uses DLP Link, which should be compatible with numerous third-party glasses (starting at $25 each on Amazon) or Optoma's own, like the ZD302 ($50 each). You can also connect an RF emitter such as Optoma's ZF2300 ($50) to use non-DLP-Link glasses.

Optoma claims you can get up to 8,000 hours by using different lamp modes; the 5,000 hours figure is for the brightest (Normal) mode. The HD142X has similar lamp life to competitors and a middling price for a replacement lamp. Epson projectors use cheaper lamps, while Viewsonic and BenQ charge more.

Unlike most projectors the Optoma doesn't include any analog AV inputs, just HDMI. That shouldn't be an issue unless you want to connect older gear or computers that lack digital outputs. It also works with MHL sources like compatible phones, but you can't directly connect a USB drive for photo or video viewing. The USB port is only for power or using the projector's remote as a makeshift mouse.

I like the Optoma's backlit remote, and the menus reveal solid selection of picture modes and adjustments for the price. The built-in test patterns are a nice touch, too.

The Optoma easily outperformed the two less-expensive projectors I tested recently, the iRulu BL20 and the Epson Home Cinema 640. The biggest obvious improvement was in resolution: blown up to 120 inches diagonal, the picture really benefited from having all of its 1080p pixels on the screen. Details were sharp, edges were smooth, and there was no visible pixel structure (screen door effect). The entire picture looked much closer to what I'm used to, detail-wise, from a 1080p or 4K TV. Just, you know, a lot bigger.

Competition was much closer between the Optoma and more-expensive projectors I tested. The Viewsonic PJD7828HDL, another 1080p DLP unit, matched the Optoma for the most part in terms of color accuracy (and both had their flaws), but the Optoma delivered superior gamut coverage according to my measurements. For its part, the Viewsonic put out a somewhat brighter image while maintaining similar black levels, for a win in overall contrast on paper.

Watch this: Six things to know about home theater projectors
02:33 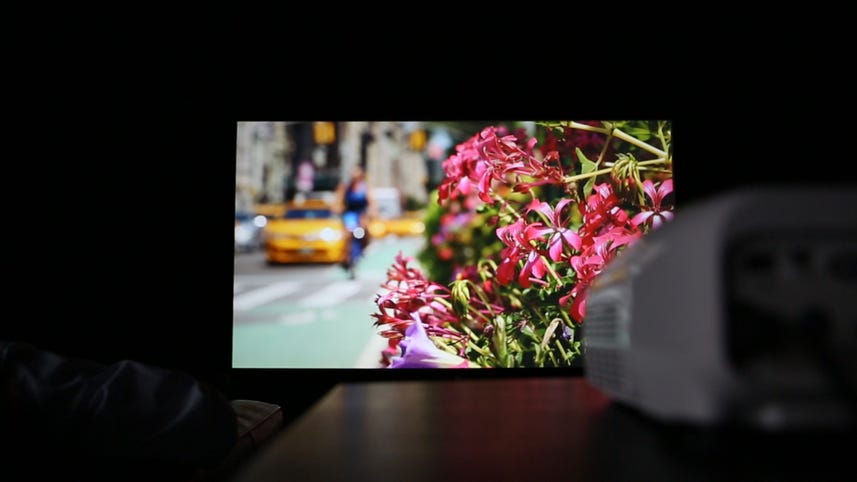 Comparing the two directly with Chapters 3 and 4 of the "Samsara" Blu-ray, it was tough to see the difference in contrast or color, but with the subtler "Tree of Life" (Chapter 2) the Optoma showed a slight advantage in skin tones and the greens of the plants. The two were neck-and-neck overall; both scored the same in this category, but if I had to choose one I'd take the Optoma.

The higher-end BenQ HT2050 ($800), another 1080p DLP, outclassed both by delivering a deeper shade of black, and comparing it to the Optoma I could see a slight difference on my big screen. The BenQ delivered just a bit more realism in dark scenes like the void of space in "Gravity." That said, the difference was subtle enough it would be tough for truly budget-minded buyers to justify the price difference based solely on that advantage.

Most 1080p DLP projectors I tested scored about the same for gaming input lag, around 33 or 34ms. That qualifies as "Good" by my scale -- it beats many TVs and should satisfy all but the twitchiest of gamers.

It's worth noting that all of these units suffered from an artifact I found distracting at times that's common to DLP: the rainbow effect. It caused brief rainbow "trails" to appear when I looked across or away from the screen in high-contrast areas (like white text against a black background). It didn't bother me much during the course of a movie, but if it bugs you, a projector like the Epson Home Cinema 2045, which uses LCD instead of DLP, might be a better bet.

To arrive at all of results below, I measured the Optoma's best default picture setting, Reference (I did not perform any calibration). The exceptions are peak white luminance and derived lumens, which were measured in Bright mode (thanks to Chris Heinonen for the lumens calculator). All observations and measurements were taken on my reference 120-inch Stewart StudioTek 130 screen, and comparisons with other projectors performed by alternately blocking their light.