Nokia hopes to hook younger users with a 65 euro basic phone that offers up some fun camera tricks. 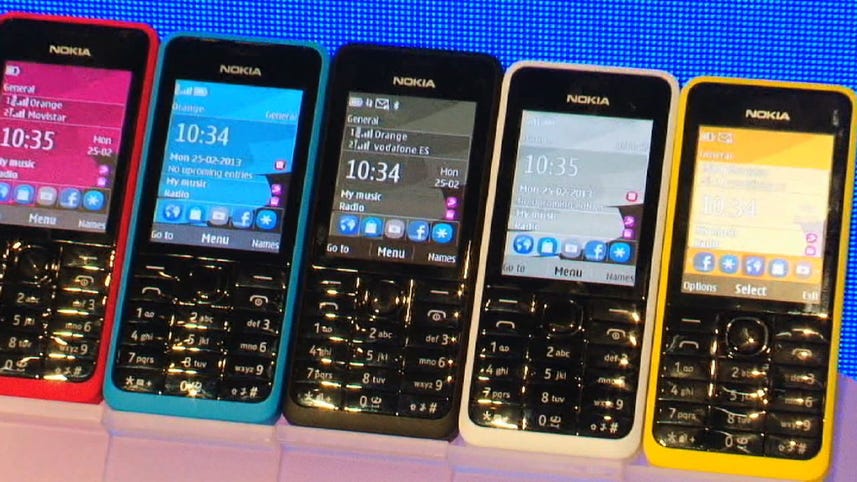 BARCELONA, Spain--Here's one thing I really like about Nokia's new Nokia 301: it truly looks like an updated version of a typical Nokia cell phone, with a solid, rectangular candy bar shape, a central select button within a four-directional navigation array, and dialpad buttons below. Like other phones that came before, the 301 runs on Nokia's Series 40 interface.

Instead of the legacy silver paint job, this one gets a body in Nokia's new signature colors: white, black, cyan, bright yellow, and magenta.

The color scheme is one hint of many that Nokia geared the 310 toward the youthful set. Integration with Twitter, Facebook, and What's App are other hints. So is the camera feature that vocally guides you to fit your face in the self-portrait frame when you flip the phone to take a vanity shot. I tried it, and can report back that it works.

Also aimed at teens, the Nokia Slam feature uses Bluetooth to share media, like a photo or a contact card. In the context menu, choose share, then Slam, and then transfer with a click. I tried it with another Nokia 301, and it worked. While you can physically touch the devices, it isn't necessary. Slam just seeks the closest compatible Bluetooth device around.

Onto the other specs, the 301's screen is a 2.4-inch QVGA display (320X240 pixel resolution), which is small, but typical for a phone of this type. The slightly raised plastic dialpad keys are easy to press and bounce back quickly. The phone comes with a single SIM slot or with dual SIM capabilities.

There's a 3.2-megapixel camera (no flash), which includes panorama mode, and burst mode with up to 5 shots in a sequence. You'll only find 256MB of internal storage, but you can save media on up to 32GB of external storage.

The quad-band GSM Nokia 301 is capable of riding 3.5G HSPA speeds, and can handle video streaming by compressing data to help keep bandwidth in check. HD Voice is an audio feature calculated to cut down on background noise.

Nokia promises that battery life is long-lasting: a single-SIM 301 gives up to 20 hours of talk time, Nokia says, and up to 39 days of standby time.