Editors' Note: We updated this review on July 22, 2016 with additional battery test results and adjusted the battery rating accordingly. However, the overall score of the phone has not changed.

The long-lasting Motorola Moto Z Force Droid has a durable display and its modular accessories are useful and easy to attach.

You can only buy the Force in the US. On Verizon. It feels hefty with the Moto Mods snapped on, and its fingerprint reader confusingly looks like a home button.

The Moto Z Force Droid sounds better on paper, but the thinner, cheaper Moto Z is the one we actually want to use.

With its swappable Moto Mod accessories that connect through magnets, and its premium hardware, the Motorola Moto Z Force Droid Edition is a powerful handset (with an overly long name) that's available only to US customers. On Verizon. For $720. Ick.

You have to really, really want this phone, and in my opinion, you'd be better off with the standard Moto Z, which is also available on Verizon (as the Moto Z Droid Edition), cheaper at $624 and thinner, which makes it generally better to use.

At this point you're going to say something about the Droid Force's higher-megapixel camera and longer battery life, or maybe its heartier display. On paper, these add up to a "better," more capable phone. But in testing, the negatives -- the thicker design and higher price -- outweigh its minimal real-life performance gains. Instead, you're just left with...an excessive use of Force. (Yeah, I went there.)

P.S.: If Verizon isn't your carrier, read my full Moto Z review for a full rundown. You can also check out pricing and sale dates for Moto Mod accessories here.

Wait, what's with this phone again?

The Moto Z Force is a fully functioning phone, but it has these little magnetic bumps on the back that allow you to attach and swap out accessories called Moto Mods. They're really cool, actually, and they either act as a customizable back cover or can enhance the phone by increasing battery life or pumping out music through a speaker. There's even a snap-on projector.

They're also incredibly user-friendly. With the audio speaker, music automatically starts playing when attached, and the projector hardly required any setup.

Watch this: Moto Mods transform your Moto in crazy ways
01:18 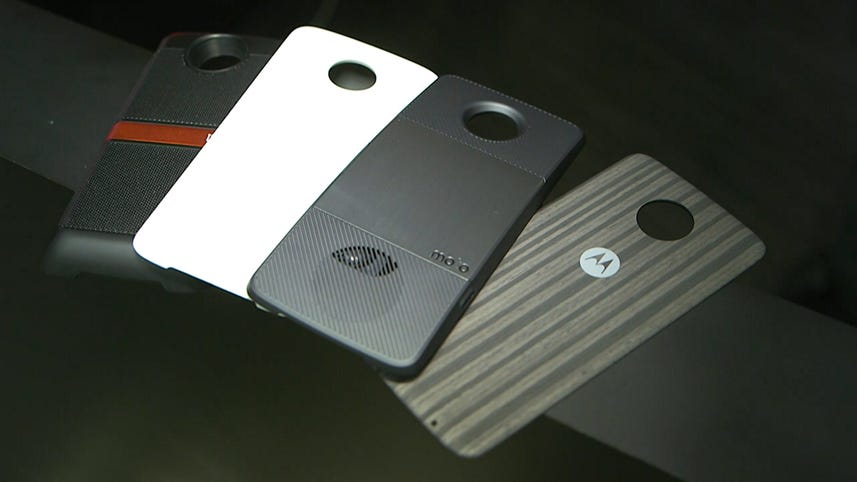 What's the difference between this and the Moto Z?

It's thicker too, and gets even heftier when you attach even the thinnest Moto Mod. The Moto Z's slimmer frame doesn't get as bulky.

The Moto Z Force also has an extra-tough display to protect itself from rough drops and falls. We first saw ShatterShield in the Droid Turbo 2 and -- spoiler alert -- it really is durable. I also noticed that its screen is notably brighter and whiter than the Moto Z when viewed side by side (though it's not exactly clear why).

Finally, there's the Moto Z Force's 21-megapixel camera versus the Moto Z's 13-megapixel shooter. The extra megapixels get you higher resolution photos and images appeared a tad sharper on the Moto Z Force. Similar to the Moto Z, however, the wonky white balance can turn objects too yellow or too blue. For more about photo quality, check out the images below and click on them to view them at their full resolution.

Which one: Moto Z or Z Force?

I prefer the Moto Z for its thinner profile, which becomes more advantageous when you start adding Mods to it. The Moto Z is also about $100 cheaper, which makes the price easier to swallow. That's enough to buy either a JBL SoundBoost Speaker, a snap-on Power Pack or a few Style Shells to get you started.

How does it compare to other Android phones?

Both the Moto Z and Z Force fared well against other flagships in benchmark scores. They beat out both the Samsung Galaxy S7 and LG G5. (You can see the results in the Moto Z review.) The Moto Z Force also came out on top with 3DMark's Ice Storm Unlimited test against the OnePlus 3, though overall, the OnePlus 3 beat out both phones on all the other tests. Then again, the OnePlus 3 won't work on Verizon.

Strictly considering Verizon devices, the Z Force is more expensive than the Galaxy S7 (which costs $672) and the G5 ($624). If the modular aspect doesn't appeal to you, the Galaxy S7 would be my choice. It has a superb camera, a beautiful design and one of the longest battery run times at 16 hours.

The G5 is also a great handset and it has a removable battery. But like the Moto Zs, its main draw is its modular capabilities, which lets you switch out its bottom bezels for other accessories. In that sense, the Moto Z phones execute the concept much better. So far, there are more components to choose from (the G5 only has two right now: a camera grip and a digital-to-analog audio converter) that are more useful. The process of swapping out accessories is smoother and easier, and you don't have to power off the phone each time like you do with the G5. Yes, the Moto Z Force is more expensive than the G5 (and if that's a factor for you then, choose the Moto Z) and its accessories aren't as portable. But if you desire swappable components, you'll have a lot more fun with a Moto Z phone.

So if it's not the best, why should I care?

The Motorola Moto Z Force Droid Edition doesn't yet offer the level of customization thatGoogle's upcoming Project Ara promises (there you can switch out components such as the camera lenses). The Mods aren't very portable, and on top of the $720 you're paying for the phone, things will get even more expensive.

But unlike the LG G5, the Moto Z phones bring us much closer to the dream of a handset we can effortlessly customize with swappable parts. The Moto Mods that give us an extra battery and louder audio speaker are features that I actually want from my phone. The Moto Z Force may not be the best value of the two Moto Z phones, but the concept has at least convinced me that a modular phone could work.

Corrected August 25, 2016. Project Ara's processor is built into the frame; you won't be able to swap it out. For more on Project Ara.