Lutron's smart switches are top-notch performers with an exceptional set of features, and they work with just about everything -- including Apple HomeKit and Amazon's Alexa.

If you're thinking of replacing your light switches with smart, app-enabled switches you can automate or control remotely, then Lutron belongs right at the top of your list. It's not particularly close, either.

Lutron's in-wall smart switches are reliable performers that work with Alexa, Nest, IFTTT, Apple HomeKit and more. The well-designed Lutron app is easy to use, and offers plenty of helpful features, including geofencing, scene management, and a security mode that'll help make it look like you're home when you're not.

Lutron won't let you program your lights to fade on or off over a custom length of time, and the Lutron Bridge requires a hardwired Ethernet connection to your router.

These are the best-performing, most fully-featured smart switches currently available, and well worth the money if you're serious about connected lighting.

Put simply, these are the best smart switches money can currently buy. We've been testing them throughout the CNET Smart Home for months now, and they're reliable, well-designed, easy-to-use, and loaded with helpful features. Plus, they work with just about everything: Alexa, IFTTT, Nest, Wink, Apple HomeKit -- you name it.

A two-switch starter kit with the mandatory Lutron Bridge retails for $190, which definitely isn't cheap -- especially considering that Belkin WeMo Light Switches cost about $50 each, and don't require any bridge at all. But, after testing both options extensively, I'm convinced that Lutron is the far superior choice, and well worth the extra cash. It's smart lighting that actually feels smart, and a clear Editors' Choice-winner for the connected home.

Lutron lights up the smart home with connected light switches

In terms of looks, Lutron lands right in the smart switch sweet spot. Available in a variety of colors and tones, each switch looks appropriately fancy, yet still understated enough to blend in with most home decor.

That balance applies to the way you use the switches, too. Pressing the button at the top brings the lights to full brightness, while the button at the bottom fades them out. The buttons in the middle allow for fine adjustments. The smooth, gentle fades from setting to setting make each light feel like a high-tech, luxury fixture, but the controls are still perfectly familiar to anyone who's ever used an ordinary old dimmer switch before.

Installing the switches is a cinch, so long as you're comfortable flipping the power off at the breaker. All you'll need is a screwdriver and a few minutes to swap one out. Just connect the three wires -- line, load, ground -- then screw the switch into place, snap the base plate over top of it, and flip the power back on at the breaker.

From there, you'll need to plug the Lutron Bridge into your router via Ethernet cable and connect to it using the Lutron app on your Android or iOS device. Then, you'll pair each switch with the Bridge one at a time by holding a button down when the app tells you to (each Bridge can manage up to fifty devices). If you're just talking about the two-switch starter kit, getting up and running should only take you about 30 minutes, if not less.

The Caseta switches communicate using Lutron's proprietary "Clear Connect" wireless protocol, a radio frequency designed for reliability and to minimize interference. The Bridge's job is to act as translator between the switches and your home network. You can also use the Wink Hub to control your Caseta gear, but you'll lose out on Apple HomeKit compatibility.

Lutron wouldn't share any specifics on the steps it takes to keep Clear Connect transmissions and customer data secure, but the nearly sixty-year-old company has a good track record here. A spokesperson adds, "Lutron's first principle is to take care of the customer. Lutron adheres to and/or exceeds industry standards when it comes to the security of our products and protecting our customers."

All about the app

Lutron's app is a snappy standout, with a clean, neatly-organized design and customizable themes. You can tap to control individual lights right from the home screen, or setup preset lighting "scenes" to activate with a tap later. Those scenes can also include Lutron's Serena shades if you have any.

The Lutron app will ask you to name each light as you add it to your setup, and it'll also let you group multiple lights into rooms and zones. The nomenclature comes in handy if you're planning on controlling your lights using Siri commands -- ask her to turn off the kitchen lights or the downstairs lights, and she'll know just what you're talking about.

To that end, you'll also find controls for all of your lights in Apple's Home app on iOS devices. The Home app also lets you relocate individual light controls straight to your iPhone's Control Center -- just swipe up and tap to turn things on and off without ever opening an app at all.

Beyond turning things on and off, Lutron's app offers a few extra features that do a nice job of separating it from the competition. A geofencing mode lets you program the lights to turn on and off automatically whenever your phone enters and exits the area immediately surrounding your home. A "Smart Away" feature can automatically cycle lights on and off in the evening to make it look like you're home when you actually aren't. Integrations with popular smart thermostats from names like Nest, Ecobee and Honeywell will let you adjust the temperature directly from the Lutron app. None of it is complicated, and all of it worked well in my tests.

There's really just one feature that's notably absent from Lutron's app, and that's custom fade durations. You can schedule and automate lighting changes, but you can't control how quickly the lights will fade on or off. That's a disappointment if, like me, you enjoy lighting that can gradually fade up in the mornings to help ease you out of bed.

Smarter than the average smart switch

Lutron's Caseta switches are definitely expensive, especially when you compare them with Belkin's popular WeMo Light Switches, which cost around $50 a pop. But Lutron's switches enjoy some significant advantages over Belkin, enough for me to say that they're worth the extra money.

Let's start with the biggest one: Lutron's dimmer switches will actually dim the lights. Belkin's WeMo Light Switches won't -- it's either on or off, with no settings in between. That's an enormous advantage for Lutron.

Support for three-way switches is another. Let's say that you have lights over your stairway that are wired to two switches: one at the top of the stairs and one at the bottom. That's called a three-way switch, and if you want to smarten it up, you won't be able to use the Belkin WeMo Light Switch -- it only works in single switch setups. 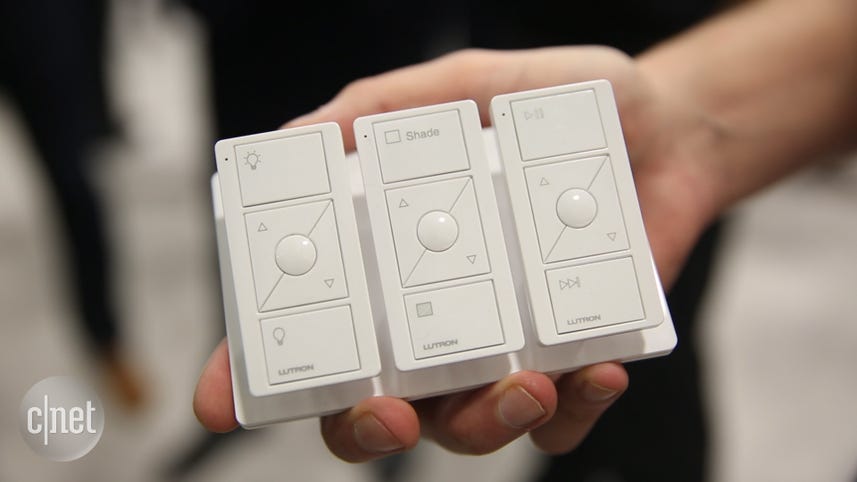 Lutron doesn't have the same problem. You can install a Caseta switch at the top of the stairs, then install a wall-mounted Lutron Pico remote at the bottom and pair everything up in the app (Lutron's $190 starter kit includes two Pico remotes, and extras cost about $25 each). We tested the Pico solution in the CNET Smart Home, and it works perfectly.

Finally, though I've already mentioned many of them, the depth of Lutron's features and partnerships really can't be overstated. A recent integration with Sonos that lets you incorporate your playlists into your Lutron scenes is a good example. Lutron went so far as to develop Sonos-specific hardware with an audio version of its Pico remote, and also lets you trigger those audio-enabled scenes using an Alexa command. In other words, Lutron's team isn't just checking off boxes when they integrate with third parties -- they're actually putting those partners to good use.

Beyond Belkin, your other smart switch alternatives include options from GE/Jasco, Quirky and SwitchMate. None of them offer the same depth of features and controls that you'll get with Lutron. The yet-to-be-released iDevices Light Switch is another option we'll be keeping an eye out for. Like Lutron, it'll offer support for both Alexa and HomeKit, but at an expected retail price of $100 per switch, it'll be even more expensive.

Lighting control is central to the modern smart home, and Lutron's cloud-connected light switches do the job exceptionally well. They're easy to install, easy to program, and easy to use with a variety of popular platforms, including Apple HomeKit, Amazon's Alexa, IFTTT, Nest, Wink, Sonos and more. They're further ahead of the curve than any other smart switch on the market, and a deserving Editors' Choice-winner.

At $190 for a two-switch starter kit and about $60 for each switch after that, Lutron definitely isn't your cheapest option -- but keep in mind that Lutron frequently runs sales and specials designed to entice you to buy in (as of publishing this, Amazon's offering the starter kit for just $160). Even at full price, these switches are well worth it if you're serious about smart lighting.